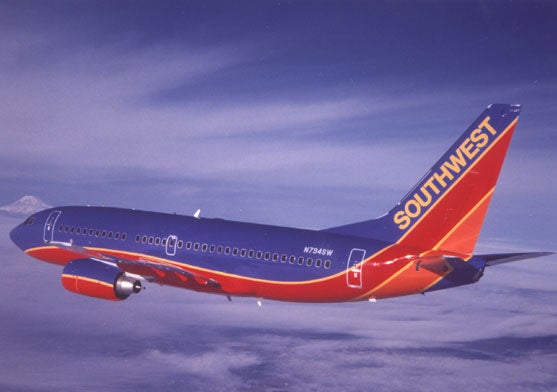 Top 10 Southwest Airlines Destinations To Book Pre-Devaluation
This post contains references to products from one or more of our advertisers. We may receive compensation when you click on links to those products. Terms apply to the offers listed on this page. For an explanation of our Advertising Policy, visit this page.

I know that a lot of folks have applied for the current 50,000-point sign-up offers on the Southwest credit cards and hope to put their points to use on Wanna Get Away fares before the March 31 program devaluation (when Wanna Get Away fares will require 70 points per $1 instead of just 60), so for today's Top 10, I wanted to put together a list of the top destinations you can get to on the airline. Granted- you get the same value out of your Southwest points whether you redeem for a boring destination or cool one (as long as they're both Wanna Get Away fares), but I still thought I'd highlight some of their more interesting destinations. It's a mix of the airline's sunny new Caribbean routes as well as some great regional alternatives to major hubs that experience better service and fewer delays. Feel free to add any of your own ideas and thoughts in the comments section below.

1. Aruba: Starting July 1, 2014, Southwest will start flying one of its new international routes to Aruba, a Caribbean island lying just north of Venezuela. Daily non-stop flights will be available from Orlando, Atlanta and Baltimore BWI. Service to Nassau in the Bahamas and Montego Bay in Jamaica will also start in July from various other Southwest destinations as well.

2. Baltimore Washington International (BWI): BWI is a huge hub for Southwest. The airline carries over 60% of the passengers who travel through this Maryland airport, and though it's just a bit farther out of Washington DC - and if you're just transiting through to other destinations in the area rather than heading into the city, flying through here can make a lot of sense. BWI has one of the lowest flight delay averages in the country, ranking number 3 in the US, with Reagan National and Dulles ranking at a dismal 28th and 27th respectively. Southwest also operates several direct coast-to-coast flights to LAX and Portland, Oregon, providing alternate transcontinental options to flyers along this heavily trafficked corridor.

3. Islip (ISP): Located 65 miles from Montauk and 44 miles from Manhattan, Long Island MacArthur Airport (commonly referred to by it's former name, Islip) services nearly 2 million passengers a year. A huge perk for flying into Islip over LGA or JFK is its proximity to the Hamptons, Fire Island and the North Fork of Long Island, home to some spectacular wineries. Flying into Islip is key during the frenzied summer season when trying to get out of NYC on a Friday can be a multiple-hour experience, this lesser-transited location is a smart way to shave off some time.

4. Las Vegas (LAS): One of the most popular destinations to visit in the US (and one of my favorite domestic destinations) is none other than Sin City itself - Las Vegas, Nevada. Southwest flies direct to McCarran Airport from many cities on both coasts, and is an easy flight from cities like Phoenix and Los Angeles. Southwest is currently running a great sale with one-way flights as low as $69 from these locations and more. Thanks to new strategic partnerships between Starwood/Caesar's, Hyatt/MGM Resorts, and Marriott and the Cosmopolitan, now is a better time than ever to earn or burn points in Sin City as well.

5. Oakland (OAK): Oakland International Airport is a short 25-minute drive or BART train ride from downtown San Francisco and a major west coast hub for Southwest. Because of its location, the famous Bay Area fog is less of an issue for air traffic conditions, and the airport has a track record of far fewer flight delays than SFO. There's also less air congestion as only around 9 million passengers fly through Oakland annually compared to around 44 million at SFO.

6. Cancun: Southwest begins its Mexico service later this year as part of the AirTran merger. Daily flights are currently available through the AirTran site with non-stop flights originating Denver, San Antonio, Austin, Chicago and BWI. Cancun is always a hotspot for college kids and spring breakers, however with an average temperature of 88 degrees year round, it's a great all-round destination as well, and you can avoid the party crowds by staying at properties further south along the coast in the Riviera Maya, Playa del Carmen and Tulum.

7. John Wayne International Airport (SNA): Whenever I'm in LA, it always seems to take me 45 minutes to get anywhere due to epic traffic, and the gridlock around LAX can be nightmarish at best. A perfect workaround for this is John Wayne Airport in Santa Ana, a short 45 minutes away (shocker!) from downtown LA. Southwest is the largest carrier to the Orange County airport with multiple direct flights from Denver, Houston and Las Vegas. A huge perk for families? SNA is only 14 miles from Disneyland!

8. Chicago Midway (MDW): Although this airport mostly plays second fiddle to hub-a-rific O'Hare, Chicago Midway is a great alternative to the often congested O'Hare. Not only is it much quieter, but it is also much closer to downtown Chicago than ORD at just a 15-minute cab ride compared with a ride time of at least 45 minutes of so from O'Hare. The airport is also a price-saver direct flight from many of Southwest's other cities. A sample fare from LGA in March shows one-way flights starting at $109 (during the aforementioned sale), compared to a $232 flight on Delta heading to ORD.

9. Dallas Love Field (DAL): Starting October 13, 2014, Southwest will add more nonstop service to Dallas Love Field thanks to the expiration of the Wright Amendment. Southwest will now have the opportunity to fly nonstop to an additional 41 states plus the District of Columbia. The airline will have access to 16 of the 20 gates available at the newly refurbished and reconstructed Love Field and the airline is treating the expansion with a lot of fanfare, so expect to see some flight deals and fare sales as October 13 approaches.

10. Tampa (TPA): With direct flights from over 25 Southwest destinations, Tampa is a large hub for the airline (it carries over a quarter of the 8 million annual passengers who fly through here), which flies here from most of its locations on the East Coast and the Midwest. Non-stop flights are available from cities as far north as Manchester, New Hampshire and as far west as Las Vegas. No non-stop flights are available to the west coast, however connections are available through cities including Denver and Atlanta. Although it might be a bit out of the way for some, when flights into Orlando are jammed, Tampa makes a great alternative for getting to Florida and the states various tourist hot spots.

As I mentioned last month, if you want to use Rapid Rewards points on any of these fares, make sure to book the flight before the March 31 devaluation, otherwise you’ll be 70 points per $1 instead of 60 points per $1. If you need to top up your account, you can transfer Chase Ultimate Rewards points into it instantly at a 1:1 ratio if you have the Chase Sapphire Preferred, Ink Plus or Ink Bold.

For more information, check out these posts:

Related stories
What it's like to take a once-in-a-lifetime trip to Finland’s Arctic to see Santa
8 mistakes to avoid when redeeming hotel points
Why you shouldn't open a store credit card during the holiday season
Where to stay at Disneyland: The best on- and off-property hotels
Editorial disclaimer: Opinions expressed here are the author’s alone, not those of any bank, credit card issuer, airline or hotel chain, and have not been reviewed, approved or otherwise endorsed by any of these entities.

Our points-obsessed staff uses a plethora of credit cards on a daily basis. If anyone on our team wouldn’t recommend it to a friend or a family member, we wouldn’t recommend it on The Points Guy either. Our opinions are our own, and have not been reviewed, approved, or endorsed by our advertising partners.
See all best card offers
Related stories
News
What it's like to take a once-in-a-lifetime trip to Finland’s Arctic to see Santa
Guide
8 mistakes to avoid when redeeming hotel points
News
Why you shouldn't open a store credit card during the holiday season
Guide
Where to stay at Disneyland: The best on- and off-property hotels