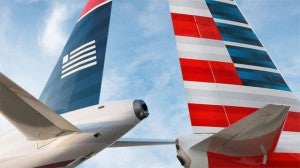 My First Post-Merger US Airways Flight and My Updated Thoughts on the Merger
This post contains references to products from one or more of our advertisers. We may receive compensation when you click on links to those products. Terms apply to the offers listed on this page. For an explanation of our Advertising Policy, visit this page.

I've been pretty opposed to the American Airlines/US Airways merger since it was originally announced. I hoped the Department of Justice would have put the kibosh on the deal, but secretly knew that US/AA would up their lobbying game and twist enough arms behind the scenes to get their injunction overturned. That eventually happened and the two carriers merged in December, though it will be several years until they are finally integrated as one operating carrier operating under one brand.

Flying US After a Long Hiatus

I grew up outside of Philadelphia and went to college in Pittsburgh, so for the first 22 or so years of my life, US Airways was my main carrier and even the first airline that granted me elite status. However, after moving to NYC and Miami, over the years I've switched from Delta, and now American is my primary carrier.

Last Tuesday I was scheduled to leave from Asheville, NC, to LaGuardia via Atlanta on Delta. I debated booking a US Airways flight out of AVL to score the current 50% bonus on codeshare flights, but they were twice as expensive as Delta and US does not currently upgrade AA elites. So for roughly half the price I could fly Delta and get upgraded as a Platinum Medallion - a no brainer.

At 7am I was sitting on the plane when the pilot made the dreaded announcement that there was a mechanical issue in addition to a winter storm watch (ice-pocalypse) that was beginning to wreak havoc on flight schedules out of ATL. I immediately Tweeted @DeltaAssist and was protected on the next flight out before anyone else on the plane could do so via the phones. However, in my gut I knew that I should just drive the 2 hours to Charlotte and take a non-stop flight back to NYC because I could tell Atlanta was going to be a nightmare. I ended up doing just that - booking a last-minute first class ticket on US Airways (the only economy fares were refundable and were actually more expensive than first class) and rented a car from Hertz and headed to Charlotte before the storm arrived in North Carolina.

Charlotte Is A Pretty Solid Airport

I've flown through CLT numerous times and have always had a pleasant experience, though now that it will be a key part of the AA hub network, I'll likely be spending more time there. At first I didn't think this was a huge benefits, but after thinking about it, I actually really like Charlotte for the following reasons.

- Simply laid out airport with all terminals connected and walkable
- Free WiFi
- Relatively uncrowded airspace, unlike NYC or Chicago
- Decent restaurant options (Have been told Big Daddy's Burger Bar in Terminal C is a must-visit restaurant- next time!)
- TSA Pre-check lines and seemingly well staffed normal security lines
- Two large US Airways Lounges at terminal B and the intersection of C and D
- International service to 38 different cities, including new seasonal service to Barcelona, Brussels, Lisbon and Manchester

I'd definitely rather connect through Charlotte than Philadelphia, New York or Chicago! Dallas would be preferred since there's a snazzy new Centurion Lounge that my Platinum Amex will get me into, but other than that, I view the Charlotte hub as a big value add as an American Airlines frequent flyer.

I don't like to issue blanket statements about airlines, because experiences can vary greatly from crew to crew or phone rep to phone rep. However, I can say after years of experiences with US Airways in the past, that generally US Airways employees are not as friendly as most other airlines. Mergers generally add another level of unease, especially amongst flight attendants, because there will always be winners and losers once employees are merged - some will gain seniority and some will drop. However, my flight crew on this day was extremely professional and friendly and the purser even approached me towards the end of the flight to see "how I liked flying on the world's largest airline?". She noticed I was an Executive Platinum with AA and was interested in my feedback and seemed excited about the merger overall. While this is an isolated experience, most American and US Airways employees from corporate executives to ground staff, generally seem happy with the merger and prospects for the new airline's long-term success. This is a huge difference form the Delta/Northwest merger where the dueling flight attendants (Delta non-union and NW union) had a major cultural battle to overcome and United/Continental where the cultures were drastically different and sadly United's poor customer service seemed to have won out.

Until March 31 (when US Airways leaves the Star Alliance and joins oneworld) we can have our cake and eat it too when it comes to earning and redeeming our AA and US miles on the two alliances and taking advantage of each airline's award chart sweet spots. However, later this year we will likely be able to merge our accounts and combine balances, which will be a good thing, however at some point the US Airways Dividend Miles program will officially merge into AAdvantage and the program will operate with one streamlined award chart. My fear is that many of the beautiful sweet spots in the AA and US award charts will go away and we will have less total options than we currently do today. However, I'm going to enjoy this period, though I do look forward to elite upgrade reciprocity in the near future.

While I still wish the merger wouldn't happen, I'm moving along into the acceptance phase of grief and realizing that as an American Airlines flyer, there are a lot of positives that come along with this merger. I now have a whole new route network which gives me more ways to earn and redeem miles it seems like American is taking a slow, methodical approach to the merger, which will hopefully alleviate any growing pains, like the cultural issues of combining work forces and the logistical challenges of merging two separate technology systems. Time will tell how well this merger is executed, but so far I'm pretty happy with it from a frequent flyer perspective.

Featured image by As part of the merger settlement - American must divest slots at DCA and LGA.