Hitlist: A New Cheap Flight Finder App With Potential...And Some Kinks to Work Out 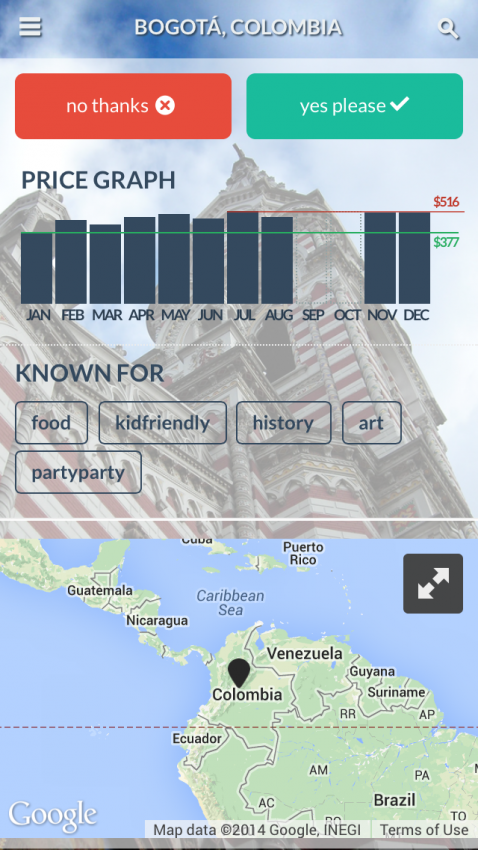 Hitlist: A New Cheap Flight Finder App With Potential...And Some Kinks to Work Out
This post contains references to products from one or more of our advertisers. We may receive compensation when you click on links to those products. Terms apply to the offers listed on this page. For an explanation of our Advertising Policy, visit this page.

TPG Assistant Editor Melanie Wynne takes a new travel app called Hitlist, which promises to get you to your dream destinations for less, out for a spin.

Fresh out of beta, a new travel app called Hitlist by Tripcommon monitors your favorite destinations and alerts you when flights there go down in price. It's like Flight Aware or The Flight Deal, but tailored specifically for you, in real time. Hitlist encourages iPhone and Android users to pull the trigger on a flight deal that it classifies one of three things: Good, Great or Spectacular, so you can decide for yourself if a fare is worth getting in on.

The trouble with Hitlist? Many of these fares aren't actually worth getting in on. Though it's stated nowhere on the app, the fares presented on the app itself are either one-way only or represent complex itineraries with multiple stops. And while the last-minute deals email generated by the app are in fact round-trip fares, these are generally non-direct flight itineraries and/or as much as $60 higher in actual price.

I have to admit, I was hooked on it for awhile there. Like a dating site for armchair travelers, the app determines your location, assigns you a preferred international airport (that you can easily modify), and immediately provides you with pretty photos of places you may (or may not) want to go.

This is what a Hitlist destination listing looks like:

In the upper left you'll see the best present deal to the destination from your preferred airport. You have the option of checking the "been there" box, tapping "yes please" to add it your personal destination hit list, or dismissing it with a simple "no thanks."

If you want to know a bit more about the destination, swipe up to reveal a page like this:

You'll see a map pinpointing your destination, a few activities/pursuits for which it's known, and a graph offering a year's worth of flight-price-monitoring. The app doesn't provide any information on attractions or suggested itineraries, so it's mostly helpful if you already know a bit about your destination. If you don't, you'll have a lot of research ahead of you, none of which will be available on the app.

Once you've said "yes please" to a few destinations, they'll show up on a My Hitlist page:

The small number of cities presently covered by Hitlist probably isn't going to give you an accurate picture of your full bucket list of destinations. However, if you don't see a city you're interested in, type it into the search field and you'll receive a pop-up assuring you that the Hitlist app team will get to work on it for you.

There's also a decent amount of functionality to tailor the app specifically to your needs. In the Settings field you can modify your preferred airport; ask that deals be emailed to you (or not); choose the type of deal and travel schedule you prefer; and turn on or off your privacy settings (more on that below). Hitlist recommends starting with "Good" deals so you'll get a steadier flow of feedback, but because I'm 1) already inundated with travel-related e-mail on a daily basis and am 2) fortunate to have a stash of miles at my disposal, I started with "Great."

I quickly received the seemingly great news that flights from Los Angeles to Helsinki, Finland -- a place I've long wanted to visit -- are about $550 round-trip in March, rising a bit in April and May, and coming down towards $550 again in September and October:

I tried to find a way to purchase this deal directly from the page, but to no avail. So, I tapped the three white horizontal bars in the top left of the screen and went to my Flights section.

Here I found only the best last-minute deals for my chosen destinations. At a glance I found the destination, the deal, and the travel dates covered by the deal; this seemed an ideal lineup for a traveler who's willing to be flexible and use some of their vacation time.

I tapped the price for LAX-Boston, and was taken directly to global travel search site Skyscanner for flight-purchasing. Within 10 seconds, I could see that the $340 listed as the deal was actually a one-way fare. I repeated this search on Kayak, Momondo, Cheaptickets, CheapoAir, Orbitz, Expedia, Cheap Fare Guru, and the Ultimate Rewards portal, and each time found a last-minute fare of $680 or higher.

I repeated the same process for Helsinki, trying to find that $550 fare. (I had to visit Skyscanner aside from the app, however, as there was no tap-through from Hitlist's destination page for Helsinki.) I soon discovered that coach fares in March to from LAX-Helsinki range from $826 to $1150, with one stop each way. The $550 fare, even on Skyscanner, simply didn't exist as a round-trip fare.

Clicking the green "tickets" button for each deal took me directly to that deal's page on Skyscanner, where I found that only a small handful of Skyscanner fares actually matched their Hitlist deal. Most Skyscanner fares were higher (some by as much as $40-60) and all but two required a stop and a plane change. Of those itineraries with layovers, some had less than an hour between flights and some more than three hours.

Even if you do choose to jump on these fares, know that your purchase time will be limited; within three hours of receiving this email, only two of the listed deals were still available on Skyscanner.

I found similar deals to those listed on Skyscanner by searching a few other online flight-purchase portals like Kayak, Priceline and Ultimate Rewards, as well as individual airline sites like Virgin America and United. In some cases, though, prices on these other portals and sites were $10-$30 lower (inclusive of taxes and fees) than the Skyscanner deals.

Hitlist has a sexy, photo-driven interface, but its travel deals land somewhere vaguely defined and useless. Only its email alert offers any real deals, and only then if you're able to be very flexible with both time and money.

From the get-go, I wasn't thrilled about the Facebook-only login, as I prefer to be more selective about the information I share and have passed over apps in the past for just such a policy. I'm happy to hear, though, that Tripcommon is presently designing a non-Facebook login for Hitlist. (Perhaps they'll also design a button that says "one-way fare.")

That said, I was still prepared to be wowed by Hitlist. After using the app for about one minute, I'd tapped my way through 30+ destinations and was already mentally planning several trips. It was exciting to think that I didn't have to plug in dream dates or pick a price range I'd be willing to pay - the deals were just going to be what they were. I could quickly see the best prices and dates, consider wiggle room in my schedule, and take it or leave it. I liked the idea of simultaneously scanning the world at a glance and being proactive about planning a well-budgeted vacation.

However, 15 minutes into the app, I ended up feeling frustrated. By listing inaccurate/incomplete fares, Hitlist wasted my time. Using the app as my guide, I was unable to find a deal that was either good, great or spectacular.

The Hitlist email alert offered a different story, but be aware that purchasing these round-trip fares directly via the email click-throughs would involve foregoing any extra bonus points. To maximize points, it's preferable to book through portals like Ultimate Rewards and American Express Travel, where your charge will be recognized as airfare and you'll get to maximize your bonus spend category, such as the 3x points on flights booked directly with airlines offered on the Premier Rewards Gold Card from American Express. (See: Maximizing Airfare Purchases)

While Hitlist's app-generated email will certainly alert you to some last-minute deals, your best bet to find flight deals is still to do the research yourself, using various resources -- such as this site -- and signing up for fare alerts to your dream destinations from Airfarewatchdog and TheFlightDeal.com to name a couple other good flight resources.