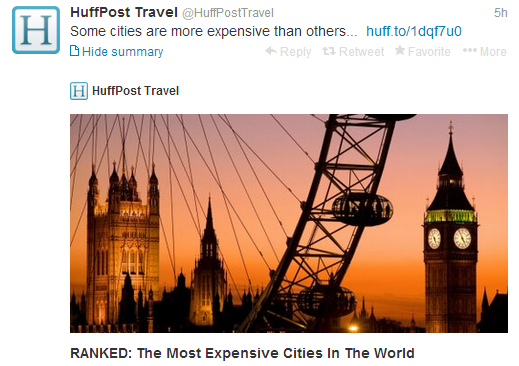 Social Media Recap-News, Contests, Promos, Trends and More
This post contains references to products from one or more of our advertisers. We may receive compensation when you click on links to those products. Terms apply to the offers listed on this page. For an explanation of our Advertising Policy, visit this page.

Best Sites For Booking Airfare: I've put together my own post on maximizing points and miles on airfare, but @FrugalTraveler at the New York Times compiled a list comparing which sites offer the lowest airfares by comparing them on six specific itineraries. He also breaks it down by specific needs like last-minute travel, domestic economy, just finding the lowest fares, etc., and while OTA's like Travelocity and Expedia came in dependably low, in certain instances Routehappy got lower fares than anyone else. I'd suggest looking at the article, finding the situations you're interested in and testing out his results for yourself.

US State Department Warns Tourists To Avoid Protest Sites In Bangkok: Americans and other travelers are warned by the US State Department to stay away from protest sites in Bangkok, Thailand, says @TheNationThailand. The situation is unpredictable and ongoing demonstration activity could be dangerous. "U.S. citizens are advised to avoid all protests, demonstrations, and large gatherings. Some protest sites are located near tourist attractions and popular shopping malls, which at times have closed or shortened hours unexpectedly," the alert says.

18 Things Hotels Can Do Better: @CNTraveler tweeted travel expert Wendy Perrin's post on things she'd like to see every hotel offer. Top of her list? Free WiFi - and to that, I say amen! Besides that, she wants to do away with add-on fees like resort fees, get better/simpler alarm clocks and lighting systems (honestly, how many switches does one hotel room need?), power strips, affordable and healthy minibar items and more. I'm pretty much in full agreement!

Rio de Janiero Hotels Agree On Price Limit During World Cup: Hotels in Rio de Janiero have pledged not to charge ridiculously high rates for hotel rooms during the World Cup as to not rip off fans, tweets @TelegraphTravel. Hotels have agreed not to charge potential guests more during this season than they would during other high seasons of the year, like New Year's Eve.

AirAsia To Launch New Airlines in India and Japan: AirAsia, a budget carrier in Southeast Asia, is planning to launch new airlines in Japan and India, tweets @skift. Operations from Japan will not begin until 2015 to allow AirAsia to focus on establishing its India unit by March of 2014. For their India unit, AirAsia will initially use 10 Airbus A320 single-aisle jets. Their goal is to focus on secondary markets in India in order to minimize airport fees and other costs.

Delta Upgrades Menu Options: Delta has some new menu options for transcontinental flights, tweets @Fodors. Economy class passengers flying between JFK and select West Coast destinations (Los Angeles, Seattle and San Francisco) now have some new sandwich wrap options to choose from onboard, in partnership with Luvo. Some of the new wraps include: the Luvo Quinoa Crunch Wrap, the Luvo Grilled Chicken Wrap, and the Luvo Roast Turkey and Havarti Wrap.

Madrid's Best Tapas Bars: @CNNTravel tweeted an article near and dear to my own heart this week. I love Madrid, and one of the reasons is the amazing food there, especially cheap and delicious tapas you can find in every corner of the Spanish capital, so I was excited to see their list of the 10 best tapas bars in the city. I'll definitely be trying some of these on my next visit!

Six Ways to Reduce The Cost Of Airfare: @Frommers tweets about ways to reduce airfare costs for your next trip. Some of the tips include booking at least 60 days ahead of departure and using social media sites like Twitter to find deals or sales.

US 2012 Tourist Boom: In news that's slightly too late, @Skift reports that the US took in more tourist dollars than any other country in 2012 at $126 billion. Spain came in second at $56 billion. Rounding out the top 10 are France, China, Macao, Italy, Germany, the UK, Thailand and Hong Kong. I suspect it was due to the weak dollar at that point, but hopefully the tourism upswing will continue once the 2013 numbers are crunched.

Win A Dream Trip To Paris: Complete this Travel and Leisure survey to win a dream trip worth $10,000. Two second prize winners will get two $5,000 trips, and a third prize winner will get a $2,500 trip. Only US residents can apply and you must submit your entry by March 31, 2014.

Coolest Small Town in America:@BudgetTravel tweets that it is holding its annual contest to choose the coolest small town in America, and you can cast your ballot until February 25. The 15 finalists include Elkin, NC; Huntington Woods, MI; Pahoa, HI; Nevada City, CA and more.
[card card-name='Barclaycard Arrival™ World MasterCard®' card-id='22089566' type='javascript' bullet-id='1']

Featured image by The most expensive cities in the world.