With the United award chart devaluation on the very near horizon, and premium cabin award flights with Star Alliance partners about to get a lot more expensive, I’ve been reminding myself that flying United operated flights isn’t bad. Honestly, I think that the United BusinessFirst product is solid, and is totally fine for sleeping and relaxing on a long-haul flight, which is the whole point of a premium cabin flight for me. Being Houston based, United is absolutely the carrier I have used the most when flying on long haul flights, so I guess I have the “advantage” of having limited exposure to flying more enjoyable carriers.

I realized I had never shared my experience last year flying in United BusinessFirst on a two-cabin 777 from Tokyo Narita to Houston.  I don’t share details on all of my flights because they are largely all similar to each other, but this flight was a little unique thanks to the Asian themed menu and accessing United’s lounge at Narita.  It had more food offerings than you will find in the US United Clubs, but it had some of the most worn down furnishings I have ever seen in a lounge.  It made my college apartment look fancy.

Eating and the United Club at Narita Airport:

I spent most of my free time at the airport eating sushi at Sushi Kyotatsu, as I really wanted another “hit” of sushi before leaving Japan.  There was a little bit of a wait to get a seat, but the sushi was very good as far as airport sushi goes.  It obviously wasn’t as good as the incredibly fresh sushi I had earlier on the trip at a restaurant in the Tsukiji Market, but it was good.

After that meal I headed to the United Club just to check it out.  I didn’t need anything that the lounge has to offer in the few minutes left before my flight, but I wanted to check it out to satisfy my curiosity.  For the record, if you are looking for an airline lounge at Narita, and are accessing it by having Star Alliance Gold status or similar, then almost universally everyone thinks that ANA lounge is far superior to the United Club.  However, after my sushi meal at Sushi Kyotatsu, I only had time to check out the United Club on this trip.

It was a large club, and had food/drink offerings, such as sushi rolls, that went well beyond the water and trail mix you see out in domestic United Clubs.  When a new tray of food would come out, people would swoop in like vultures and attack it. 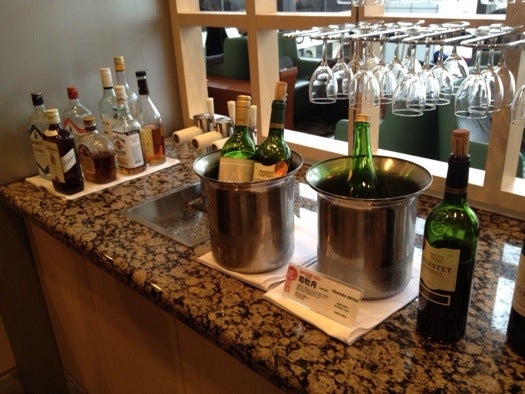 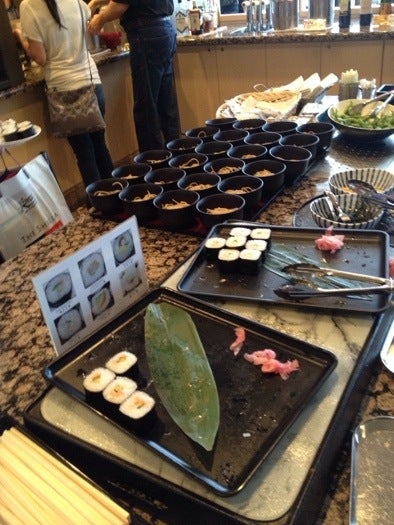 The food in the lounge was not as good as the sushi you could buy at the airport restaurant, but it was “free” in the lounge, so that is a plus.  I tried a little, and some of it was okay, but nothing too special.  Still, it was free food in a United Club, so that is at least semi-impressive compared to offerings in the US.

I won’t fault a lounge like this one for not having spectacular food, but I do find some things to be inexcusable in an airline lounge that supposedly caters to “premium” passengers.

The furniture in the lounge literally had holes in it.  This was the chair I was seated in, but it by no means was the only piece of furniture falling apart in that lounge.  This was not something that happened overnight, and frankly I would think it should be embarrassing for United to have their lounge in this condition.  It’s been several months since my trip, so maybe someone who has been more recently can give an update on whether the furniture still looks like this, but it should have never gotten to this point to begin with.

United BusinessFirst on 777 from Narita to Houston:

I was seated in seat 4A for the 11 hour and 45 minute flight home.  I really think this is the perfect length for a long haul flight as it gives you time to eat, watch a movie, and get a “full night’s sleep”.  I would have never understood the concept of flights being “too short” until I started to experience them.  For example, when you fly to Western Europe and the overnight flight is only 7 hours long, between take-off, dinner service, breakfast service, and landing, you don’t have any shot of getting enough sleep to avoid being totally exhausted the next day.  Of course, if you are having to suffer through a long flight like this in coach then this theory does not necessarily apply. 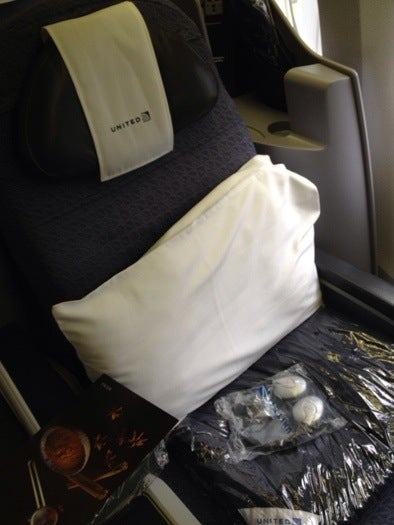 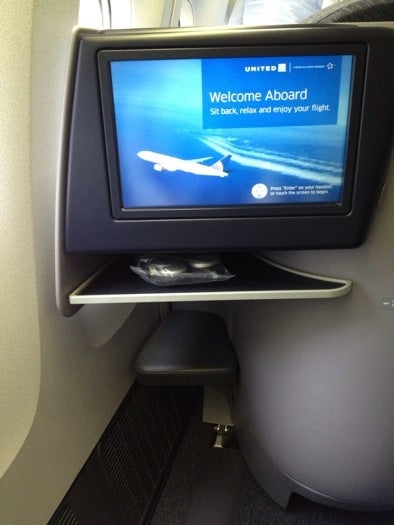 I find these BusinessFirst seats totally fine for someone my size. I also love that I can slide my purse under the little foot rest below the TV screen.   I think these seats are a little bit cramped for my 6’3′ husband, but you just need to curl your legs up a little bit more when you lay down and be thankful you are not in coach. 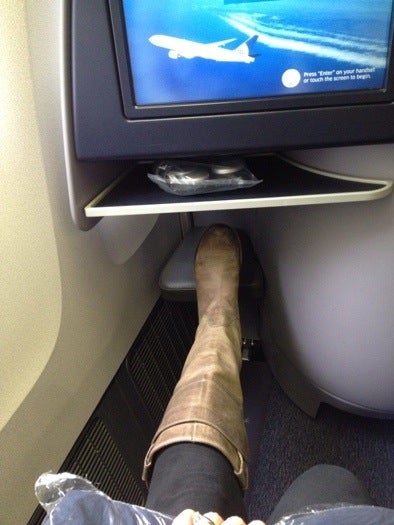 The service on this flight was fine, the flight was on-time, and there were no major issues one way or another.  The only somewhat interesting thing that stood out was the menu as you could pick from Grilled Pork Chop with chive mashed potatoes and broccoli; Grilled Chicken Breast with herbed basmati rice, snow peas, and pumpkin; or Miso-glazed fillet of sea bass with asian-style rice cake and choy sum with oyster sauce or…..the Japanese Selection.  Normally I would have probably gone for the chicken, but I wanted to try out the Japanese selection since we were coming back from Japan.

The pictures I have of the meal are pretty terrible, but at least it will give you some idea.  I don’t know what some of the food was, but I pretty much gave all of it a shot.  It was a fun experiment, but I’m glad I wasn’t starving as I would have still been pretty hungry after the meal since some of the food wasn’t really geared for my Americanized fondness of Japanese food. 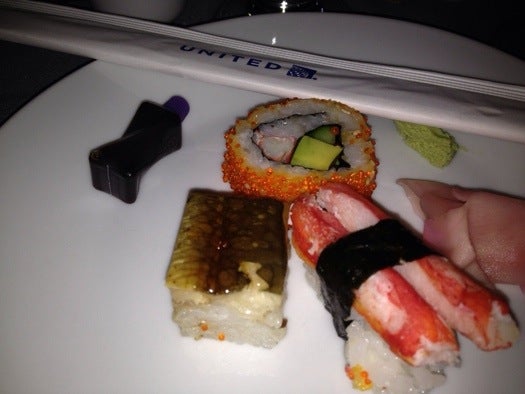 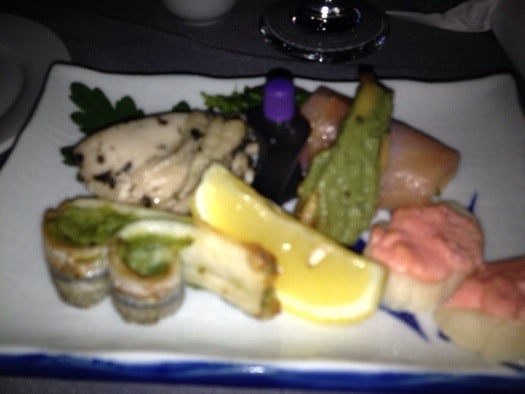 For “breakfast” (which was really lunch where you were about to land) you had your choice of an omlettte, cereal, or simmered red snapper with teriyaki sauce and rice.  This was an easy call to go for the snapper, and it was simple but pretty decent. 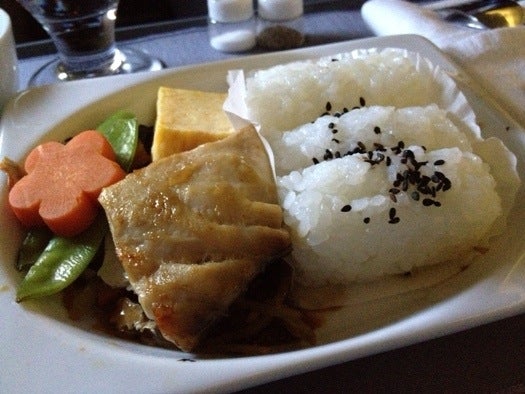 There was also a snack basket available if you needed some snacks between meals. 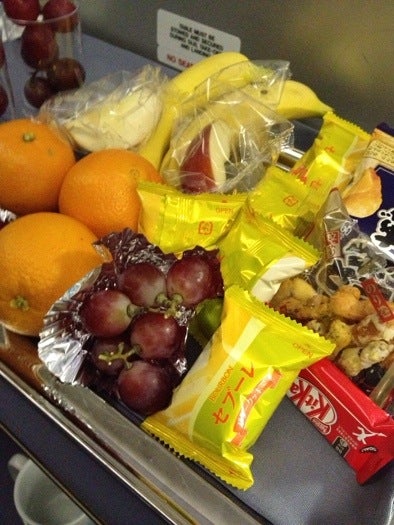 I’m sure there are several better premium cabins to fly to/from Asia than United, but this was 100% adequate for me and I wouldn’t hesitate to do it again in the future…though I do think the United Club needs an order of new furniture as soon as possible!  On the current United award chart business class to/from Japan is 60,000 miles each way.  Beginning on February 1, 2014, this same business class flight on United operated metal will be going up a little to 65,000 miles each way.

If you want to read more about my quick trip to Japan, you can read about my stay at the Park Hyatt Tokyo and Tips For a First Trip to Tokyo.

Summer Hull aka Mommy Points, ran the Mommy Points site for families who want to travel more for less using miles and points for seven years and now heads up TPG Family when she isn't exploring the world with her own two girls.
You might like
Deal Alert: Fly to San Francisco for under $200 one-way
Deals
8h ago
Savvy Saturday: How to use the Southwest Companion Pass to save on trips to Europe, Asia and more
News
Yesterday
Will United offer elite shortcuts again? MileagePlus exec tells TPG what to look for in 2022
News
Yesterday
Delta SkyMiles® Platinum American Express Card