Dealing With Spirit Airlines During Delays and Cancellations

The Houston area is dealing with its second round of “winter weather warnings” within the last week.  This is not very normal for this area in the winter, certainly not twice in one week.  Put freezing temperatures and precipitation together in this part of the country and all heck breaks lose until we warm back up…honestly just put the potential of freezing temps and precipitation together and things start going haywire.  In anticipation of this winter weather (non) event, the airlines were very proactive in cancelling lots of flights for today as the day rolled on yesterday.

Anyone watching the news saw what was coming, and since my parents were scheduled to fly their “favorite” airline today, Spirit, I tried to help them proactively fly out yesterday in advance of possible weather or cancellations today.  First, I tried to simply tweet with Spirit Airlines and see what was possible.  Some airlines, such as American Airlines, are very active on Twitter and it can be the fastest way to get some help or answers.  However, with Spirit I might as well have been tweeting with my old dog.  She would have been more responsive.  Since that got nowhere, I picked up the phone.  My mom had already done the same the night before with no success, but I thought since the weather and flight were now a bit closer, I might have more success.

By the time I called, most of the other major airlines had issued “weather waivers” for the Houston airports that would allow free changes.  I got through to a real person very quickly, but it was pretty clear early on this was likely an outsourced call center that wasn’t going to be overly helpful.  I tried to explain the situation and asked if they could move to the earlier flight to beat the weather.  I was told their scheduled change was only 1 minute, not 15 minutes, so they could not change.  I tried explaining I wasn’t calling about a schedule change, I was calling to inquire about a weather waiver because of all the impending warnings about the weather.  Again, I was told something about the one minute schedule change not being sufficient.  After talking in circles for a while, it was clear there was no ability to go off-script.

Normally this could be a hang-up and call back situation to see if you have more luck with another agent, but since my experience matched 100% what my mom reported with the two agents she talked to, that didn’t seem like a worthy endeavor.  We knew that Spirit would likely cancel their flight the next morning, as many of the other airlines were doing the same, but could not do anything about it (without spending more money to change) until they potentially issued a “Weather Buster” policy.

Eventually, after all other airlines had done so, they did issue that weather waiver.  My dad got the email from them, and it was posted on their website.  This time my dad called in to try and get on the flight out that evening, and he was told there was no availability for that flight.  This was clearly not the case since they were not only selling tickets for that flight on their website, but still had seats at the “saver” award level that my parents were booked at.  By this point my parents decided to just give-up and hope for the best with their AM flight…and then it cancelled. 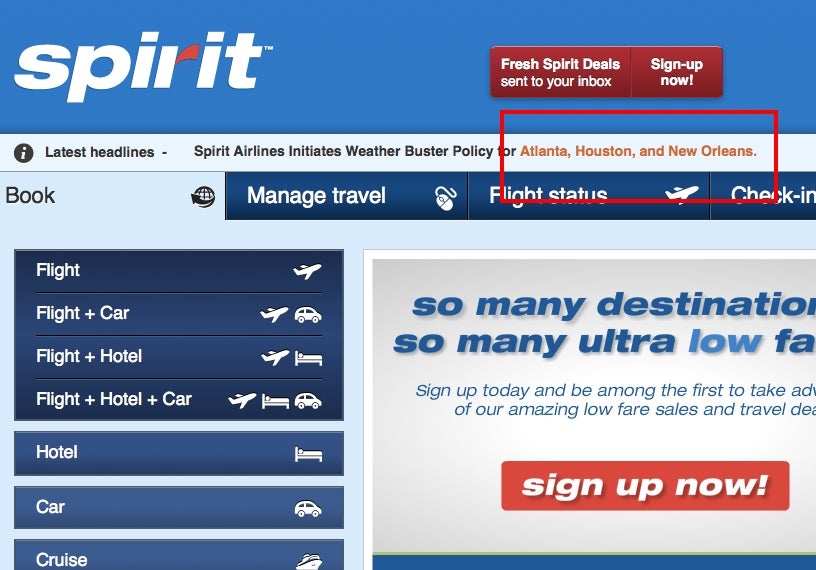 We were more than done with calling Spirit, so went back to their website and now that the waiver was in place, and the flight was cancelled, we were able to easily change to the flight they wanted out that night without a fee.  At this point that flight was just a couple of hours out, so they hurried up to finish getting ready and headed to the airport.  That change would have been possible hours later on all other airlines in the area, but it did finally work out on Spirit.  Had they not been proactive, I’m not sure when they would have gotten to their destination since Spirit does not have the best reputation during irregular operations.

It all worked in the end, but through helping them I did get some first-hand experience working with Spirit Airlines customer service.  It is, as expected, pretty bad.  If you need to call in to get help, you might as well just go talk to yourself in the mirror as you will be a better listener.  Everyone we spoke with was polite, but totally unhelpful.  Even once the weather waiver was issued, they gave inaccurate information about the available options.

During irregular operations I would expect them to act slower than everyone else, but they may eventually issue what they call a “weather buster” so you can make changes.  You can keep an eye on their website for this waiver.

Before then, my experience showed that you are not going to get any wiggle room at all, even if logic is on your side.  When/if the weather buster happens, just go to the website to make your changes.  It may not be a perfect website, but you will have better luck there than with calling and trying to talk to someone.

They also were not immediately re-booked on another flight, so be proactive.  We got our own new flight shortly after the cancellation, so I’m not sure if Spirit would have eventually re-booked them automatically, but I would not leave that in their hands.

Thankfully this weather event had advanced notice, and should be short-lived.  In the case of a bigger event with a bit less notice, it may be much harder to get out on Spirit in time, but now you have a little more info on your side if you want to try.  Or, you may be like many other travelers and never consider Spirit in the first place.

Summer Hull aka Mommy Points, ran the Mommy Points site for families who want to travel more for less using miles and points for seven years and now heads up TPG Family when she isn't exploring the world with her own two girls.
You might like
Capital One extends limited-time perks on select cards through June 2021
News
6h ago
JetBlue expands partnership with Qatar Airways, new loyalty benefits coming soon
News
6h ago
Delta cuts 6 routes, resumes 6 others in latest network update
News
7h ago
Chase Sapphire Preferred® Card