Best Place to Sit With a Family on the Airplane

There may never be a “right answer” on where to sit, but it sometimes isn’t even possible to give any specific advice without knowing the type of aircraft, which cabin(s) are being considered, whether or not you have access to extra legroom or bulkhead seats, and how many people are in your party.  Those are all things to think about, in addition to how you think you kids will behave on the plane.  Ultimately you know your kids best, and probably have a gut feeling on how they will do in-flight even if they have never left the ground.

So while I can’t answer what the best seating arrangement is for every scenario, I will give some pointers that will hopefully apply to many situations.  I’d also love to hear your thoughts!

This may go without saying for those who are proactive enough to consider the best seating arrangements, but don’t just assume the airline has assigned your family seats together at all.  Obtain seat assignments at the time of booking, and then keep an eye on them as your trip approaches.  Equipment swaps or similar can cause seating arrangements to change without you necessarily being notified.  Once the plane is pretty much full, your seating options will be dramatically worse.

Probably the most common seating question I get is what to do with a family of four when the rows offer a 3-3 seating arrangement.  In that case, some initial thoughts that families have is to put three family members on one side of the aisle, and the other alone just across from them on the other side of the aisle.  This can certainly work, and keeps everyone close together, but I would argue that with young kids your best option might be to divide and conquer…. especially if your kids might be inclined to kick the seat in front of them or fight with each other.

If you put one parent paired up with one kid, and sit behind each other in say 7A and 7B and 8A and 8B, then not only does each kid have a parent, but if the kid in row 8 accidentally slips in a few seat kicks, then they are only impacting their own family members in row 7.  Additionally, the family members in row 7 can choose to not recline their seats, which really helps if the kid in row 8 is in a car seat that puts their legs very close to the seat in front of them.  My own kid had her legs pinned in a way that really hurt when the person in front of her reclined quickly while she was in a car seat.

Bulkheads can be very good, but there is often a “stuff problem”:

The bulkhead seats can be a really good place for families in terms of having lots of legroom, but be aware that in many aircraft that means there will be no place to put bags/purses under the seat in front of you.  This can be a big problem if you will need to frequently access snacks, toys, etc. from your bag.  You may have to sit in the bulkhead if you need a bassinet on an international flight as they are often in that location.

Assuming you have the option of redeeming miles for coach or premium cabin seats for your family, you have to decide where you will be more comfortable.  If the premium cabin seats you are considering are lie-flat on a long-haul flight, then I can assure you that you will absolutely be more comfortable there in most cases.  Kids do better sleeping laying down than sitting up just like adults.

Guess which shot below resulted in the longest period of sleep…. 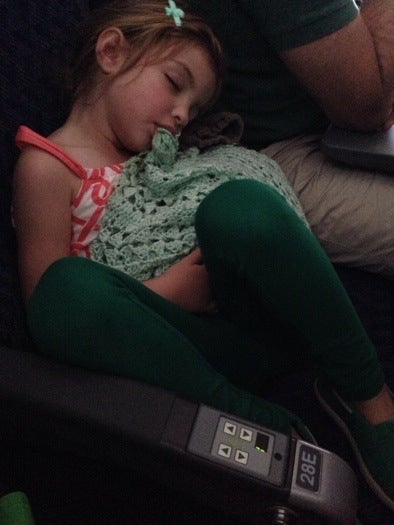 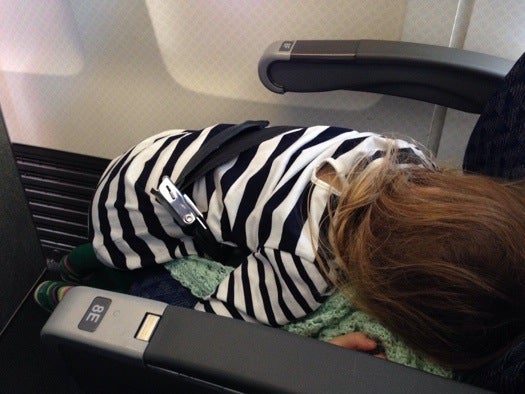 However, you may be met with less tolerance in a premium cabin in the event that your kids misbehave or have a meltdown.  Many folks there likely paid the premium to sit there because they want/need sleep on the flight.  That said, no one on the entire plane wants to be seated next to a crying baby whether they are in seat 1A or 44E, so just do your very best to meet your kid’s needs and keep them from disturbing others to the extent humanely possible regardless of where you are sitting.  Make the decision on where to sit based on where your child will be most comfortable, not where you will get the fewest dirty looks.  For me and my family, that will be in a lie-flat seat when that is an option to consider.

Assuming you made the decision to sit in coach, you still need to decide whether to sit toward the front or back of the coach section.  Some families like to sit at the very back of the plane both to be close to the lavatory for potty breaks, and also because the “grumpy” frequent flyers usually don’t sit back there.  I have heard the back of the plane referred to as the “baby ghetto” because you can often find a higher concentration of families seated in that section.  We sometimes sit at the back of the plane, but I personally prefer the front as it is easier to get on and off with all of our stuff, and that is usually where the extra legroom seats are located.  However, not everyone has access to extra legroom seats without paying extra, so if you find yourself toward the back, you will likely be in good company.

Lap Infant vs. Buy Infants Their Own Seat

The other decision you will have to make if your child is under 2 is whether to buy them their own seat or have them as your “lap child”.  If you can afford it either in dollars or miles, you will almost certainly be more comfortable if your child (and their stuff) has their own seat.  If your child is not yet mobile and still sleeps/nurses frequently you may be relatively comfortable with a lap infant, but once you get passed about the 9-12 months mark, it is often a struggle to keep the baby happy and still in your lap.

There are also some safety concerns to keep in mind when making this decision.  Air travel is of course statistically much safer than travel in a car, so the likelihood of anything happening is very low.  However, some flights do have unexpected drops, turbulence, and hard landings where babies would be safest strapped in their own seat via their car seat.  On most flights though you are simply buying some extra space and convenience by putting the under-two crowd in their own seats.

If you have some stories or suggestions to share about how your family selects seats on the plane I’d love to hear it!

Summer Hull aka Mommy Points, ran the Mommy Points site for families who want to travel more for less using miles and points for seven years and now heads up TPG Family when she isn't exploring the world with her own two girls.
You might like
American Airlines expands Flagship Lounge access to lie-flat Hawaii routes
News
6m ago
13 cards currently offering sign-up bonuses of 100,000 points or more
News
2h ago
Amtrak’s best-ever credit card offer can get you $1,400 in train travel
News
2h ago
Delta SkyMiles® Platinum American Express Card