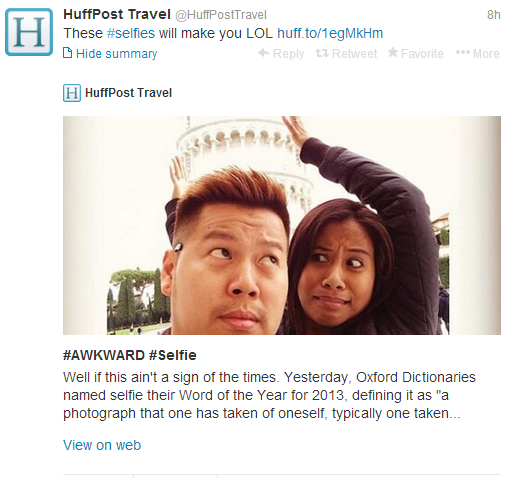 Visit These UNESCO Sites Before They Disappear: Out of the 981 UNESCO Heritage sites, 44 are considered to be in danger of disappearing soon for a variety of reasons, some being climate change, irresponsible tourism, and political instability, tweets @HuffPostTravel. Some of the sites include the Everglades National Park, the Ancient City of Jerusalem, and the Belize Barrier Reef. For a full list and to discover exactly why each destination is slowly disappearing, click here.

Have A Laugh With These "Trelfies" (Travel Selfies): @HuffPostTravel tweets about some of the funniest "Trelfies" aka Travel Selfies. The word selfie has joined the Oxford dictionary this year, being defined as "a photograph that one has taken of oneself, typically one taken with a smartphone or webcam and uploaded to a social media website." For a good giggle, check out some of the best trelfies, such as the "Eiffel Towfie," the "Stonehengfie,"the "Statue of Libertelfie," and more.

Kayak Offers Thanksgiving Travelers Winter Storm Advice: With millions of travelers struggling to get home for the holidays, @Kayak is asking people to travel smart, especially those facing bitter storms on the East Coast. The storm is expected to bring heavy rain to the Southeast on Tuesday and then turn north and move up the East Coast, possibly disrupting travel through Wednesday, according to the meteorologists at AccuWeather.com. Whether traveling by road or air, be sure to check the latest weather updates before you leave home.

Is This The Best Job In Travel? Conde Nast's @cntraveller has job envy over Spanish DJ Liz Mugler's new gig as the resident spin master at the W Verbier, which opens on December 1, 2013. The highly-sought after job means that Mugler will now get to spend her summers clubbing in Ibiza and her winters on the slopes in Switzerland. The new property marks W Hotels’ first alpine escape and the brand's only hotel in Verbier, and is located in the heart of the action in, Place Blanche.

Inside Prince Harry's "Tricky" Antarctica Trip Preparations: Do you want to live like a king - or travel like a prince? The royal lifestyle isn't always as glamorous as you'd expect, as Prince Harry revealed when giving details about preparing for his latest trip to Antarctica to the Telegraph, which was tweeted by @BBC_Travel. The Walking With The Wounded South Pole trek will see the English prince - who is currently suffering from a broken toe - and 12 injured service personnel enduring treks of 15-20 km a day, in temperatures as low as minus 45 Celsius and 50 mph winds as they pull their 150-pound sleds, known as pulks, towards the southern-most point on the globe.

The Worst Travel Advice Ever: @Huffpost tweeted Lonely Planet's breakdown of some truly terrible travel advice. The article explains why advice like, "Never Eat Street Food," and "Always Take Travelers Checks" can be very wrong. Anyone who travels will also know that international stereotypes can be very wrong, such as: "French people are very rude and British people are all polite," says your auntie, who has never been abroad, quips the amusing article.

All Eyes Are On Brazil For 2014: @lonelyplanet tweeted about how the next few years are big ones for the people of Brazil, as they are hosting two of the most coveted sporting events in the world. Brazil is hosting the FIFA World Cup in 2014 followed by the summer Olympics in 2016. A lot of effort has been put into creating and improving infrastructure and security for these events, especially in Rio de Janeiro. Despite the huge challenges ahead, both events are track for smooth sailing starting next summer.

From Brooklyn To Paris, Behind The Coolest Hipster Hotels: You can't just say something is cool and then have it be so, but these hotels are truly hip. The term "hipster hotel" originated in Brooklyn, NY, according to @BBC_Travel, but has now spread all over the world and is particularly popular in Paris. Skift.com explains the "Brooklynization" of the hotel industry, which involves recycling historic buildings, industrial chic design, with an emphasis on local food and beverage purveyors and down-to-earth personalities, such as at Brooklyn's Wythe Hotel, and Hotel FABRIC in Paris.

Save 30% Off Select Qatar Airways Flights: @QatarAirways tweeted about their 3 Day Special, where customers can get up to 30% off flights for outbound travel from November 28, 2013- January, 23, 2014. Some of the destinations include: Egypt, Germany, Saudi Arabia, Italy, Poland, Malaysia, Kuwait, Kenya, Pakistan, Morocco, Spain, Algeria, Ethiopia and Sudan. Hurry, because you only have until midnight on Wednesday, November 27th to book!

Win A Top Travelers Gift: Simply answer one question, "Where do you want to be at Christmas?" and you will be entered to win one of 10 Top Gifts for Travelers, tweeted @RoughGuides. Gifts include things that are handy to frequent travelers, such as portable phone chargers, camera tripods, luggage, etc. Click here to sign up and answer the question, and click here to view all 10 prizes. You have until 11:59 pm December 22nd (GMT time) to enter.

KLM Becomes First Airline to Show Customer Service Wait Times On Twitter: @Skift tweeted that KLM will now put their customer service wait times on Twitter, and it will be updated every five minutes. They are the first airline to do this and hopefully more will soon follow. As Twitter doesn't have a feature for this service, KLM will use their cover photo as a wait time feature. They will soon offer updates on the KLM Facebook page as well.

Flyers Using A Booking Technique Called Fuel Dumping To Avoid Fuel Costs: Wiley flyers can advantage of a system by booking a third flight in order to avoid getting charged with fuel costs, tweets @airfarewatchdog. This practice is called fuel dumping. Basically, a flyer buys a third flight after their roundtrip, usually to a smaller and more obscure destination, called a "3X," to avoid paying the "YQ" or the fuel surcharge, which often slips through the cracks when the third flight is purchased.

Help Shangri-La Hotels With Relief Efforts In Philippines: @ShangriLaHotels tweets about how you can help with their relief efforts in the Philippines. There are various ways to get involved, such as bidding on paintings, origami stars, handmade nativity scenes and more, that are made by children and workers in the Philippines, with all proceeds going to typhoon victims. For just $21, you can buy one relief box, which will include food items, 3 water bottles, soap, blankets, mats and a bucket. You also have until December 31st to donate award points, which the Shangri-La Hotels will convert to dollars and then also match $20 for every 1,000 points you donate.

Win A Two Night Stay At A Luxurious Oklahoma Cabin: Simply "Like" Oklahoma Tourism on Facebook and enter your details to win a 2-night stay in a gorgeous cabin near Beavers Bend State Park in Oklahoma, tweets @travelok. You have until December 9, 2013 to enter.

Win A Trip To Cancun And See Ricky Martin in Concert: Delta Airlines and Palace Resorts are working together to give away a trip to Cancun for two. The prize includes a $400 airfare voucher per person from Delta, and a 3-night stay at the Moon Palace Gold & Spa Resort in Cancun, tweets @kingsweeps. Also included are two tickets to see Ricky Martin in concert and a VIP event honoring the singer on December 28, 2013 in Cancun. All entries must be received by 11:59 p.m. EST on December 4, 2013 and you can apply via the Palace Resorts Facebook page.

Win A Trip To The French Alps: @FodorsTravel along with Tablet Hotels is sponsoring a contest where you can win a trip to the French Alps. The prize include $2,000 towards airfare for two, a 5-night stay in the Altapura hotel in Val Thorens, France, and a welcome box of goodies. You can apply for the contest by simply registering for the weekly Fodors newsletter. You have until 11:59 pm EST on December 15, 2013 to enter.

61% Of People Use Social Media On Vacation: @tripadvisor tweets survey findings showing that 85% of people take their smart phones on vacation, and 61% use them for social media access. Why? FOMO - otherwise known as Fear Of Missing Out - is listed as the biggest reason people want to stay connected to social media during their vacations.
[card card-name='Chase Sapphire Preferred® Card' card-id='22125056' type='javascript' bullet-id='1']

Related stories
Carnival Celebration: What we loved and what needs work on Carnival's newest, biggest ship
Earn bonus points on paid stays with IHG's Cyber Monday promotion
Today only: Save up to 50% on United award flights to Asia, Australia and Europe
Cyber Monday deal roundup: Luggage, headphones and travel accessories on sale today
Featured image by Enjoy these " Trelfies" aka Travel Selfies for a good laugh.