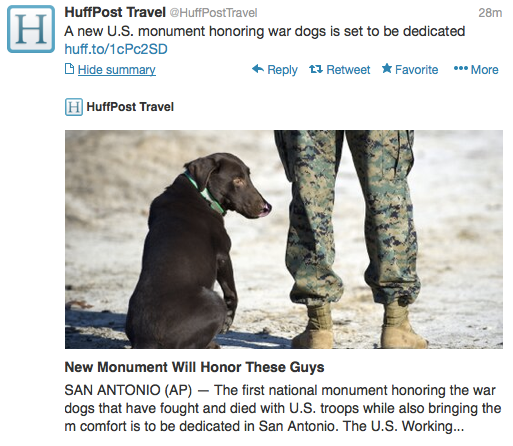 Win A Trip To Nepal On Qatar Airlines: If you have your sights set on the Himalayas and climbing Mount Everest, or just want to visit the tea houses of Nepal, Qatar Airlines is giving away two tickets to Katmandu through the CheapOair.com Facebook page. Enter now through November 4, 2013 at 12:00 am EST simply by filling out the form on the Facebook page here. You have to be a resident of the 48 contiguous states (excluding Hawaii and Alaska), and the winner will get one voucher to be used towards the purchase of 2 economy class roundtrip tickets on Qatar Airways to Kathmandu, Nepal departing from New York City, Orlando, Washington Dulles, or Houston-George Bush Intercontinental Airport.

National Monument Honoring US War Dogs To Be Dedicated At Lackland Air Force Base: @HuffPost Travel announced the good news that the first monument honoring war dogs that have fought and died with U.S. troops while also bringing them comfort is to be dedicated at Lackland Airforce Base in San Antonio. The U.S. Working Dog Teams National Monument will be dedicated on October 28 at the base where many of the U.S. military dogs are trained, as well as treated when wounded.

Ryanair To Introduce Flexible Fares And Change Bag Rules: Known for its extreme cost-cutting, budget airline Ryanair is to continue its transformation by offering new fares and services aimed at pulling in business travelers and families, revealed @Skift. The no-frills airline will start selling higher-priced flexible tickets aimed at the business market, allowing passengers to change flight more easily without further penalty, along with groups traveling together to pool their luggage allowance to ease the burden on families.

American Tourism To Cuba Is On The Rise: After being tightly restricted for over 50 years, American tourism in Cuba is growing, with 98,050 Americans visiting the Communist country in 2012 - up from 73,566 in 2011 - reported @LATimesTravel.

Travelers To Thailand Could Get Charged Entrance Fee: What has long been a budget travel destination could get pricier thanks to plans by the Ministry of Tourism and Sports, Ministry of Public Health and members of the Royal Thai Police to charge an entrance fee of 500 Thai Baht (about $16.55) per visitor staying in Thailand longer than three days as of January 1, 2014, according to @HuffPost Travel.

Detroit's New Marketing Campaign Hopes To Attract Conventions And Conferences To Bankrupt City: Detroit hopes that it will get an upswing of visitors thanks to a new marketing campaign to convince top executives that it is a comeback city where they should hold company meetings and conventions. Bill Bohde, senior vice president for sales and marketing at the Detroit Metro Convention & Visitors Bureau, is launching a $1.6 million marketing campaign even as the city is trying to become the largest in the U.S. to enter bankruptcy, reported @APTravel.

Enterprise To Become The First US Car Rental Company To Offer Motorcycles: It is no longer compacts and mid-size vehicles on the Enterprise Rent-A-Car lot, the car rental company is the first major company to rent motorbikes, reported @USAToday Travel. The two-wheelers will be available for rental only from a facility in Las Vegas, where Enterprise hopes to woo enthusiasts who want to see local sites, from the Strip to the Hoover Dam, by motorcycle.
[card card-name='The Platinum Card® from American Express' card-id='22504813' type='javascript' bullet-id='1']