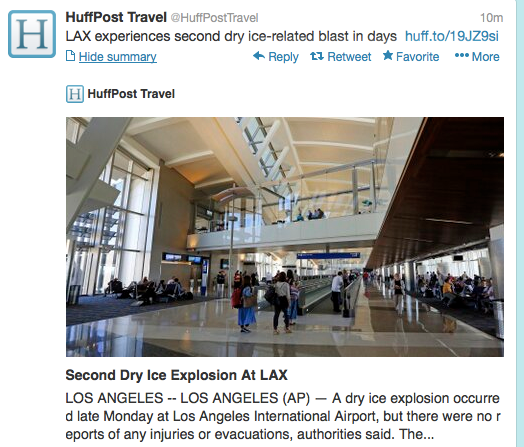 American Airlines AirTime Challenge: American Airlines @AmericanAir is launching their #AirTime Challenge which is a fun competition for Dallas Cowboys fans. Here's how it works: Now through December 29, 2013 during each Dallas Cowboys game, if you can guess the total amount of time the ball is in the air for all completed passes by Dallas in the game you can win 25,000 American AAdvantage miles. To enter, just tweet your guess along with hashtag #AirTime. You can view the full terms and conditions here.

Save with SPG Hot Escapes: @SPG tweeted earlier this week that they are launching their new savings package for SPG members called SPG Hot Escapes. SPG Members who take advantage of these deals can save 25% off the daily rate, while non-members will receive a discount of 20% off. These will be going on each week from Wednesday through Saturday, so be sure to check them out if you have any upcoming Starwood stays planned.

Second Dry-Ice Blast At LAX In Two Days: Los Angeles International Airport was the target of two dry-ice blasts in two days this week, but there were no reports of any injuries or evacuations, authorities said according to @HuffPost Travel. The second batch of dry ice was found near a gate area, a secure part of LAX only accessible to airport workers, however there were no reports of significant damage.

Disabled Passengers Humiliated At Phoenix Sky Harbor International Airport: @ABCNewsTravel tweeted that Phoenix Sky Harbor International Airport got a record number of customer complaints in 2012 for its security checkpoint procedures. The majority of the 26 complaints - double the national average - came from disabled passengers, or those who'd had breast cancer, who complained that they were made to remove various prosthetics in public.

CNN Staffers Spend 24 Hours At Atlanta Airport: @CNN is giving followers an inside look at one of America's busiest airports. On August 28, a team of 40 CNN staffers descended on Hartsfield-Jackson Atlanta International Airport. In November, you can see what those 24 hours looked like and the special report is currently being teased on Twitter.

Frommers Travel Gives Gluten-Free Tips For On The Road: @FrommersTravel is serving people on gluten-free diets with their guide to restaurants and shops that serve gluten-free food staples for traveling.

Cambodia's Tourism Industry Gets A Boost: The International Business Times' Twitter page, @IBTimes reported that Cambodia's tourism industry has been steadily rising throughout 2013, despite the monstrous flooding affecting the agricultural sector. Having learned to cater to international travelers and offer unique attractions based on its cultural heritage, such as temples and elephants, the Southeast Asian nation has attracted more than 3 million foreign tourists in the first nine months of the year, a 19 percent year-on-year increase.

Boy Drowns In Cruise Ship Pool: @CNN Breaking News reported that tragic news that a 6-year-old central Florida boy drowned in a pool on a Carnival Cruise ship. The boy was spotted underwater in a mid-ship pool by passengers Sunday, according to a police report and one witness account. It occurred when the ship, the Carnival Victory, was returning from its last leg of a four-day Caribbean cruise.

Business Travel On The Rise, But Could Be Weakened By Government Shutdown: There was good and bad news from @USAToday Travel, while business travel is expected to rise 7.2% in 2014 to $288.8 billion, it could be hampered by the current government shutdown that could weaken the projected bounce and has already affected spending, according to a survey conducted by the Global Business Travel Association.
[card card-name='Ink Plus® Business Credit Card' card-id='22129636' type='javascript' bullet-id='1']

Related stories
Target’s big annual gift card sale is this weekend
What are points and miles worth? TPG’s December 2022 monthly valuations
Capital One Venture X to lose Priority Pass restaurants and spa services as of Jan. 1, 2023
December 2022
Featured image by @HuffPost Travel reported that there was a second dry ice blast at LAX.