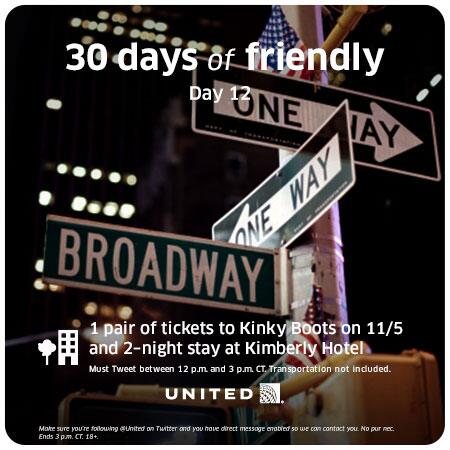 Starwood’s Take a Spin Promotion: Don't forget to enter Starwood's Take a Spin promotion which ends on Thursday, where you can win a number of instant prizes such as free nights or Starpoints, and be entered to win the grand prize of 250,000 Starpoints. You can enter online once a day through Thursday, October 10, 2013, or you can also enter onsite at several Starwood sponsored events. You might as well enter since it only takes about 30 seconds.

Nine-Year-Old Boy Who Sneaked Onto A Las Vegas Plane Reportedly Had Criminal History: There has been continuing developments about the boy who stowed away on a flight to Las Vegas this week, and the latest report from @FOX5Atlanta is that is wasn't his first time in trouble. In an email obtained by the Star Tribune, Janine Moore, the area director of the Hennepin County Human Services and Public Health Department, said child protection investigators have conducted four assessments on the boy's family since December 2012, including vehicle theft and sneaking into a water park with another family. However, the release of the memo to the media was without Moore's authorization, she claims.

The Pinocchio Lizard Returns To Ecuador After 50 Years: @BI Contributors is celebrating the return of the Pinocchio Lizard after 50 years to the Ecuadorian town of Mindo, a popular ecotourism venue, in which tourists can see a relatively undisturbed rainforest. The Pinocchio anole was discovered in 1953 but since then had been barely spotted and many assumed it was extinct.

Follow The Olympic Torch Across Russia: @HuffPostTravel is following the 39,000-mile trek the Olympic Torch will make across Russia before kicking off the Winter Games on February 7. The flame for the 2014 Sochi Games was finally lit on Sunday by Russian President Vladimir Putin, and even though it went out, it was quickly relit.

Happy Birthday Appalachian Trail!: One of America's most famous hikes celebrated a milestone birthday on Tuesday. The journey which will take you from Georgia to Maine — or vice versa — right through New York's Bear Mountain State Park, where the national scenic trail was essentially born 90 years ago, reveals @USATodayTravel.

United Nations Demands Compensation For Victims Of Haiti Cholera Outbreak: The UN made a rare case for compensation for the thousands of Haitians who have died of a cholera outbreak in the Caribbean nation, reported @AP. The deadly disease is thought to have been brought in by UN peacekeepers, and claimed the lives of more than 8,000 people.

Canadian Drifter Admits To Attacking Tourists Sat On A NYC Park Bench: A drifter has pleaded guilty to attempted murder in a July 2012 incident in which he allegedly attacked a Spanish tourist with a claw hammer, reported @NBCNewYork. Visiting from Barcelona, Spain, Hugo Alejandre was eating lunch with his girlfriend in a park surrounding New York's City Hall when a business-suit-clad man sitting next to them pulled out a hammer and started hacking at him, alleged the Manhattan district attorney's office.

Airlines Are Adding Tiny Luxuries To Their Services To Lure Fliers: While there are still major cutbacks, increasingly airlines are adding little perks to tempt travelers, such as toiletry kits or superior snacks, tweeted @BizTraveler, citing an ABC News report. Top of the list is JetBlue's forthcoming Mint, which offers in-flight amenity kits curated by cosmetic subscription service Birchbox.

United's 30 Days of Friendly Giveaway: Through October, 26, 2013 on Twitter, @united is giving away prizes each day as part of their 30 Days of Friendly Giveaway. To enter, just head over to their twitter page and see what the rules are for each day. Usually it's just as simple as answering a question, or saying one of your favorite destinations. They are giving away tickets in local venues, Premier Access, and other prizes so head on over to twitter this month to enter!

Delta Boarding Music Now on Spotify: Every month, Delta Air Lines updates their boarding music selection which is played during boarding as well as deplaning. @Delta tweeted this week that these playlists are now available in Spotify, so if you heard a song you liked on a recent Delta flight, and want to find out what it is, now you can do so easily.
[card card-name='Starwood Preferred Guest® Credit Card from American Express' card-id='22034416' type='javascript' bullet-id='1']