European Storms Derail Travel: Tips on How to Navigate a Cancellation 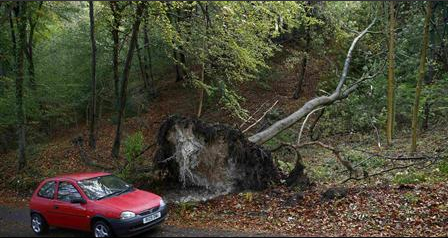 European Storms Derail Travel: Tips on How to Navigate a Cancellation
This post contains references to products from one or more of our advertisers. We may receive compensation when you click on links to those products. Terms apply to the offers listed on this page. For an explanation of our Advertising Policy, visit this page.

Violent storms battering the UK and Europe have already killed eight people, left around 600,000 without power and cancelled hundreds of flights and rail services.

Hurricane strength winds whipping up to 99 m.p.h. across southern England and Wales have made "St. Jude" the worst storm in a decade, and Denmark and Sweden are expected to be next, reported Reuters.

About 130 flights out of London Heathrow were canceled today, October 28, 2013, and passengers were asked to check with their airline before making travel plans. Gatwick, Stansted and Luton airports have all urged the same, although only a small number from those locations have been canceled so far.

By late afternoon on Monday GMT time, flights were leaving Heathrow again to destinations including Chicago, Washington, Boston, Montreal, Shanghai and Tokyo. The airport's Twitter page, @Heathrowairport, was also giving live updates on the development of delays, as was their Facebook page.

Even if your flight is leaving as scheduled, it's best to call ahead and confirm and to make sure your seat assignments are secure so there are no hiccups, and for those of you whose travel has been disrupted, here are some helpful tips and flight change and refund policies of the major airlines so that you don’t get stranded.

British Airways posted details of reduced service on their website, stating: All long-haul flights into and out of London Heathrow are currently planned to operate as normal. Those wanting to change their flight even if it is still running were give the option of changing the date and time of the flight for another service departing between 29 October 2013 and 11 November 2013.

If your flight is still operating and you are due to travel on Monday 28 October to or from London Heathrow, Gatwick or City Airport, the following option is available to you:

You may change the date and time of your flight for another service departing between 29 October 2013 and 11 November 2013.

How to change your booking:

If you are booked to travel on a flight that is cancelled, you can either:

If your booking also includes any other BA flights that are not cancelled you will be able to change these flights at the same time.

If your booking includes a hotel, a car, a transfer or an experience booked in conjunction with a cancelled flight, you can either:

If you booked through a travel agent, tour operator or online (but not on ba.com): Please contact them directly.

Virgin Atlantic announced that weather conditions had improved and by Monday afternoon EST, they had resumed a normal flight schedule. Passengers who had been booked on canceled flights were given to following options:

A number of Virgin Atlantic Little Red services from LHR to Manchester, Aberdeen and Edinburgh were canceled earlier in the day, but they had resumed by mid-afternoon GMT time, as had international flights to New York JFK, Hong Kong, Sydney and New Delhi.

In the Netherlands, the extreme weather has caused disruption to Dutch airports and around 100 flights were canceled at Amstersdam's busy Schiphol Airport. KLM advised that the windy weather would disrupt travel until Tuesday, October 29, and told passengers to check for updates via @KLM on Twitter or through Facebook. Around 20 flights had been canceled at Paris' Charles de Gaulle Airport, which is the main hub for KLM partner Air France.

BBC weather forecasters said the storm, which saw heavy rain fall across many areas and wind speeds of more than 70 m.p.h., left the UK shortly after 12 noon GMT - leaving a "broadly windy day."

The major US airlines do not currently have travel advisories or policies posted relating to the current storm, but if you are scheduled to fly one from the US to a European hub that is being affected, here is contact information for you to manage or change your reservations.

Delta: You can edit your itinerary at delta.com, or you may contact Reservation Sales to make changes to your itinerary. Additional collection in fares may apply. Check flight status frequently for up-to-the-minute info about your flight plans, or get updates sent directly to your wireless device or email with Delta Messenger

US Airways: Change your trip online at usairways.com/manageyourtrip. If you need help, please call 800-428-4322.

Delays are now expected to spread to mainland Europe, with impending delays at Hamburg Airport. German authorities have halted all local trains in Schleswig-Holstein, reported the BBC, as well as the Hanover-Bremen service and north-bound trains from the state of North Rhine-Westphalia. Emergency services in Denmark and Sweden have issued storm warnings, as Scandinavia faces winds gusting at about 100 m.p.h.

The strong gusts and falling trees caused chaos for train travelers as well, with many companies running on reduced service because lines had been blocked. A number of London Overground trains were canceled, with shuttles running between some stations. The Gatwick and Stansted Express trains to the respective airports were both affected, and there were no trains in or out of London St Pancreas International for the rest of Monday. All Eurostar services to Europe were running but subject to delays. For the latest service updates from National Rail, click here.

Road travel was also severely hampered as falling trees and debris left routes impossible to pass and backed up traffic.

Dover port reopened just after 9 a.m. GMT, and ferry services have resumed. Two cruise ship departures, Crown Princess and AIDASol, were due to leave as scheduled that afternoon, according to Reuters. A ferry carrying 1,000 people from Newcastle to Amsterdam had been forced to return to sea after officials closed the port of IJmuiden, near Amsterdam

Among the fatal victims of the monster storm are a teenager in Kent, England, and a man in Watford, who were both hit by falling trees, and a man and women who died in West London when three houses collapsed following a gas explosion. A 14-year-old boy was also swept away by giant waves in Newhaven, East Sussex on Sunday.

For current and upcoming flight cancellations, check out FlightAware.com.

For more information on how to deal with weather delays and cancellations, read these prior posts:

What To Do If Superstorm Nemo Derails Your Travel Plans

Related stories
Don’t forget: You have one month to use up your Uber Rewards points
You can earn Southwest points with the Rapid Rewards Dining program: Here's how
Fly premium economy to Istanbul starting under $1,000
Now live: Chase Freedom cardholders can earn 5% back on PayPal and Walmart purchases this quarter
Featured image by St Jude's storm has flattened some areas of Britain (Photo Credit: Reuters/Eddie Keogh).