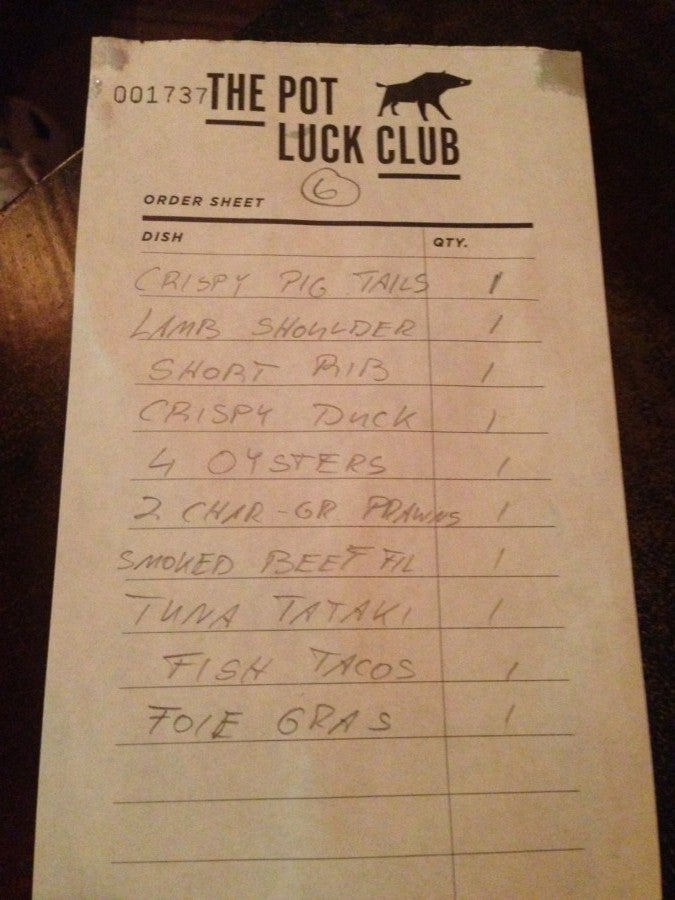 South Africa Restaurant Review: The Pot Luck Club
This post contains references to products from one or more of our advertisers. We may receive compensation when you click on links to those products. Terms apply to the offers listed on this page. For an explanation of our Advertising Policy, visit this page.

While I was in Cape Town last week, my friends took me to check out one of the hottest restaurants in the city, The Pot Luck Club. The restaurant is located on the 6th floor of The Silo in the Old Biscuit Mill, which is a small former industrial complex that has been reinvented with new merchants, night markets, office space, restaurants and designer stores, so it makes for a cool spot to hang out before or after your meal.

From the restaurant itself, you can take in fantastic views of the surrounding area while trying a bunch of different dishes since everything is served tapas style and comes out as it's prepared - usually from lightest to heaviest.

Like its sister restaurant, The Test Kitchen, where I ate last time I visited Cape Town, The Pot Luck Club is the brainchild of chef Luke Dale-Roberts and the sharable dishes are meant to evoke an American-style pot luck dinner from the 1950s. It first opened in 2011, but was relaunched with this concept in February 2013, and while the idea behind it is classic, the ever-changing menu is distinctly contemporary and contains some fun surprises.

The waiters recommend that you order 3-5 plates per person since they are on the smaller side. Between two of us, we ordered 13 dishes with dessert, which we thought was going to be way too much but after polishing it all off we were satisfied and surprisingly weren't over-stuffed. Although we are two grown men and can eat more than most (especially because we were starving by the time we got to dinner), I don't think three plates would be enough as a meal for anyone.

We first started off with fish tacos that came two per order. The fish, which was really just a kind of ceviche sandwiched between two fried wonton shells, was really fresh but the dish was difficult to eat - we resorted to just using our hands.

Next up was a dish with two char-grilled prawns, Tom Ka Gai and roasted chopped peanuts. Tom Ka Gai is a type of spicy soup in Thai cuisine that is made up of coconut milk, straw mushroom, lemon grass, and coriander leaves. This combination was interesting and had a unique Southeast Asian flavor, but it wasn't my favorite.

I always like to try appetizers that incorporate duck because I am rarely disappointed by them. The crispy duck spring roll from Pot Luck was really tasty and I enjoyed the sweet dipping sauce, but it still couldn't compete with the duck crepe with hoisin-citrus dressing from The Test Kitchen (also located in the Old Biscuit Mill). That was by far the best duck I've ever had and I have been dreaming about it ever since! Still, this one was delicious and a light way to continue the meal.

The next plate was Foie Gras "Au Torchon" (meaning "in a towel," because it is wrapped and slow-cooked) with fig and champagne chutney. I like foie, though I don't eat it much, and this one was delicious. Cooking it au torchon leaves it tender and juicy, while the fig and champagne chutney contained just the right balance of sweetness and acidity to keep the dish from becoming overly rich.

While this next dish may seem gross, I just had to try it. The only way I can describe the Crispy Pot Luck Pig Tail is deep-fried goodness. You eat it as if it were corn on the cob and get a really great flavor from the citric mustard lemon and honey glaze. As long as you don't think too much about what you're actually eating - it really is delicious!

The next dish was my absolute favorite of the night - the Chinese-Style Short Rib with dark beer and Doenjang glaze. The ribs were really tender and rich in flavor and the meat practically fell off the bone. I was licking my fingers afterwards!

Our other meaty dish, the Smoked Beef Fillet with Black Pepper and Truffle Café Au Lait was definitely a close second for my favorite dish right behind the short rib. Again the beef was extremely tender and delicious and the sauce was complex and nuanced. Both dishes were amazing and made me wish they came as larger portions.

On the lighter side, the tuna tataki was sliced thin and lightly seared, and came with radishes, green onions (since it's spring down there!) and sesame seeds in a spicy tamarind dressing.

Through my travels I've become quite the oyster connoisseur and tend to order them wherever I go, so I couldn't resist when I saw them on the menu at The Pot Luck Club. The dish came out with four fresh oysters aligned on a wooden block, all topped with red onion and ginger gribiche with ponzu dashi jelly. This was a nice change from the normal array of condiments like cocktail sauce, horseradish or mignonette sauce, and I loved the Asian flavors, especially the kick given to the mayonnaise-like gribiche by the fresh ginger.

We also tried the South African assorted cheeses. These were all so delicious and went really nicely with the wine we were drinking.

For dessert we ordered the peach tart with shaved walnut which was incredible and just the right blend of sweet and tangy to leave your taste buds feeling light at the end of the meal.

Not so great, however, was the second dessert we tried, the molten chocolate with ginger ice dream. This took the cake (so to speak) for the worst dish of the night. I thought it was way too sweet and tasted like sushi because of the ginger ice cream. This is definitely a dish to avoid, in my opinion.

Despite the distaste of the last dish, I had a really great experience in all at The Pot Luck Club and recommend it to anyone who finds them self in Cape Town. The service was friendly, and the location and atmosphere were fantastic and fun - definitely a great place to spend an evening in town. I always love be able to try a lot of different plates instead of getting one huge serving of something so this was a great place to order things that I normally wouldn't have - like the pig tail!

Because of the great food and cool location, the restaurant has quickly become one of the must-eat places in town, so if you're interested in going, I'd highly recommend reservations because it isn't an easy table to get for procrastinators!
[card card-name='Chase Sapphire Preferred® Card' card-id='22125056' type='javascript' bullet-id='1']