Earlier this year I got in on a pretty good deal on round trip flights to Hawaii on United.  The flights were from Dallas and went for a little under $400 RT each.  My husband and I booked two tickets for our anniversary and then applied some regional upgrades to secure a business class seat.  If you want tips on redeeming miles for flights to Hawaii read this post.  Currently, some of the United Hawaii flights that connect through Houston and on to Honolulu are on three-class Boeing 777 airplanes, and ours was one of those planes.  This meant that our regional upgrade would only get us from economy into business class, not first class.  We were very interested in first class as those seats are lie-flat, but were not interested at the offered upgrade price of $749 per person at check-in.

We were not in first class, but we were seated right behind the first class cabin, so got a good look at that seat.

The first class seat does indeed convert to a lie-flat.  The service in first seemed to be identical to the service in business class, so your only real advantage was the seat…but that is a pretty significant in first over business, especially on the overnight flight back to the mainland.  If you are redeeming miles, I think it would be worth the incremental 10,000 United miles each way to get the lie-flat first class seat over the recliner business class seat to/from the US mainland.  However, it is probably not worth the $749 they wanted to go from business to first on a revenue ticket for 99.9% of folks.

I’ll start this section by saying I am so grateful I have the ability to use things like miles or regional upgrade certificates to sit in a seat that is way more comfortable and spacious than economy, especially on an eight hour flight to Hawaii.  Heck, I’m fortunate to have the ability to go to Hawaii at all.  That said, these business class seats are a tad old and tired compared to the United BusinessFirst seats that I have flown in many times on Trans-Atlantic or Trans-Pacific flights…and flights to Hawaii can be just as long as some of those flights.

It is a 2-3-2 arrangement, so families with three travelers may do best in the middle of the airplane, and couples traveling would be best served on either side of the aircraft. 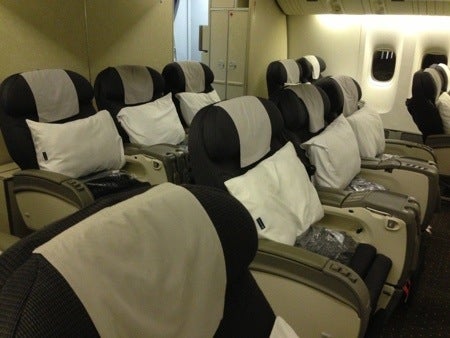 We were seated on the side, so having two seats next to each other was nice.  The thick pillow and blanket were also very nice. 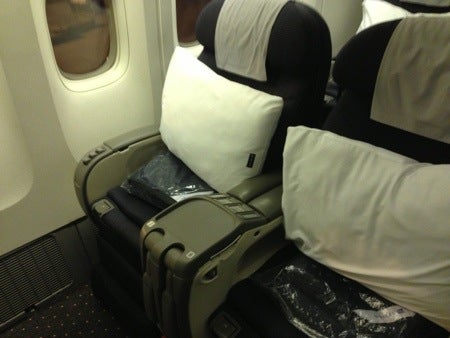 We had bulkhead seats, so legroom was plentiful. 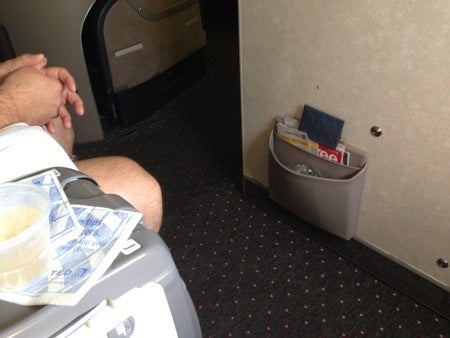 To give you an idea of the age of this seat, it even still has the Airphone! 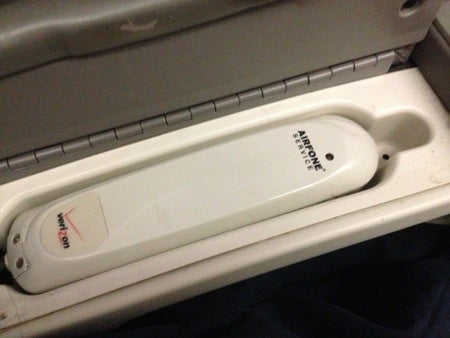 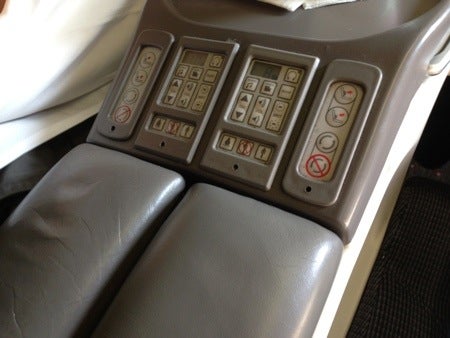 There was in-flight entertainment, but it was one of the older systems where a selection of movies are shown on a loop on various channels instead of being available on demand. 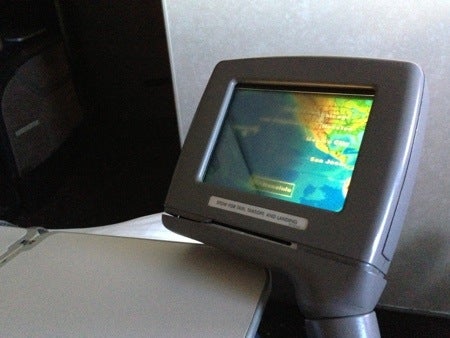 On the Houston – Honolulu service, they served lunch shortly after departure and then a “snack” about an hour before arrival.  Before the meal service they served the traditional nut mix and drink.  I have had mai tais on United before that were actually okay, but these just tasted like sugary syrup and were not very good.  On the 7:30PM return flight, dinner was served just after take-off and breakfast about 90 minutes before an 8AM arrival into Houston.  I ate before getting on the return flight so I could immediately go to sleep.  I highly recommend that course of action for the shorter overnight flights.  If you skip one or both meal services you can potentially sleep for about 7 hours.  If you participate in both, your sleep time is likely limited to under 5 hours. 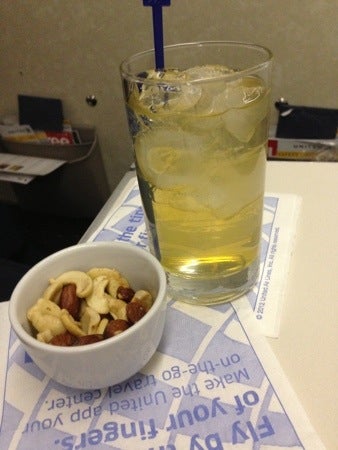 The lunch meal on the outbound was chicken, rice, and green beans.  It looked okay, but frankly it was so bad that even the rice was crunchy.  It tasted a bit like leftovers that had been reheated three or four times. 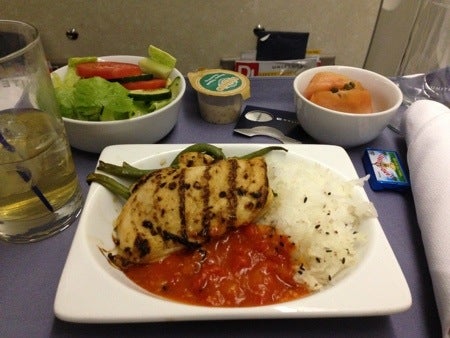 The chicken I eventually deemed inedible.  Again, I am so thankful to be served anything to eat on a plane, but this was really pretty bad. 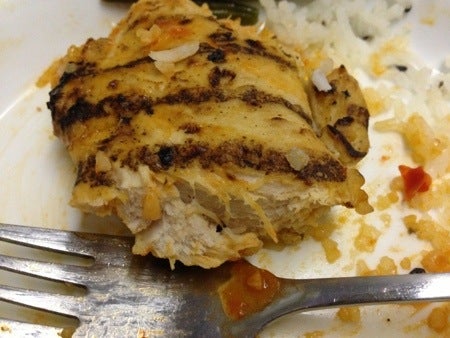 The smoked salmon appetizer, side salad, and dinner roll were the highlights, but take that with a grain of salt as it really only means they didn’t taste bad.  My husband said the ice cream sundae was pretty good!

The second meal served before arrival was one that I have been served many times on United flights, and it was okay.  Not great, but it was edible. 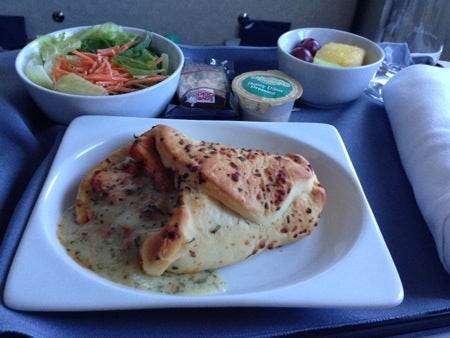 Despite being in a seat that was not at all lie-flat, I was able to sleep for more than half of the flight on the outbound.  I was able to curl into one side and pass out holding the pillow.  On the overnight return flight, I slept off and on for almost the whole flight (bring an eye mask!).

My husband was too large to really move around in the seat, so he did his best to sleep some sitting upright, but he had far less success than I did. 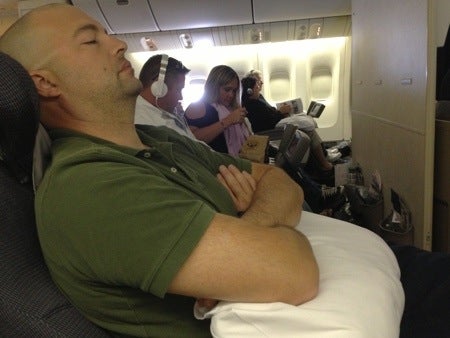 The service on the flight was quite good, and the crew made it feel exciting to be heading to Hawaii!  They played the halfway to Hawaii game where you guess what time you will reach the midway point to Hawaii.  There was a go-around that happened pretty close to the ground, but the crew was great about keeping us informed as to what was happening so in the end it was just a free extra tour of the island before landing. 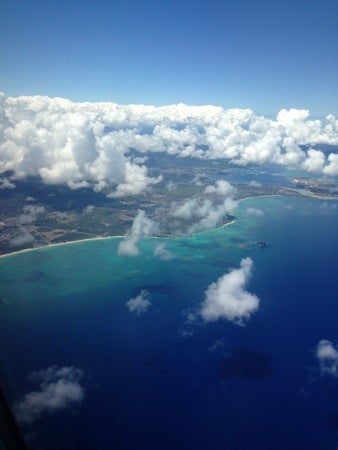 The seat was a little old and the food was not award winning, but the flight was smooth, on-time, and had a friendly crew.  Best of all, the flight landed in paradise, and that was the point of the journey.  Being able to fly in a seat better than coach is also a plus, just don’t expect to sit in the “best seat ever”.

Have you flown on this or a similar flight?  What did you think?

Summer Hull aka Mommy Points, ran the Mommy Points site for families who want to travel more for less using miles and points for seven years and now heads up TPG Family when she isn't exploring the world with her own two girls.
You might like
We’re giving away 1 million Avios to 10 readers; here are 4 exciting ways you could use them
News
10m ago
How the new Balearic Islands’ sustainability laws could change your next holiday
News
1h ago
Calling all Wordle fanatics and travel enthusiasts: There’s a new game to pass the time at the airport
News
2h ago
Delta SkyMiles® Platinum American Express Card