Good Places for Families to Eat on Kauai

I’m sure you are well aware this is a travel/miles and points blog and not a foodie blog (I don’t even know enough adjectives to write a foodie blog), but for my family, eating and experiencing “local cuisine” is a part of the travel experience. We aren’t usually found at the very best restaurants, but we do try to at least do a little research and hit up some of the unique or highly recommend joints around whatever town we are visiting when possible. And other times we just try to get something in our stomachs quickly so we don’t all starve and have catastrophic meltdowns…

For the final post in my series on our family trip to Kauai I want to mention some of the good spots for families to eat while they are on the island.  Some of these I visited myself and some we hope to visit on a future trip to the island.

Shave Ice:
Obviously a family can not live on shave ice alone, but on Kauai you sure could try.  Shave ice is inexpensive and almost a sure-fire hit with kids of all ages, so I recommend that you add this to your eating to-do list while on Kauai.  Make sure to note it is “shave ice” and not “shaved ice” – may sound minor, but they take their shave ice seriously.  I’m sure everyone has their favorite shave ice, but I very much enjoyed Uncle’s Shave Ice located on the south side of the island about 5-10 minutes from the Grand Hyatt Kauai in The Shops at Kukui’ula. 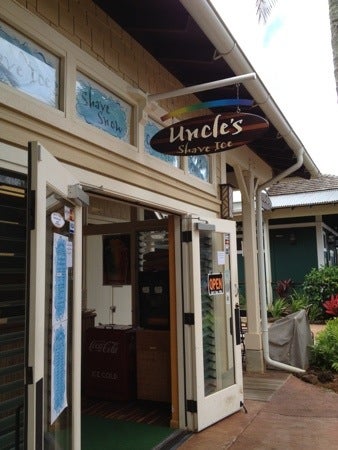 The ice wasn’t crunchy at all – it was like soft snow-like substance that just melted on your tongue.  In fact, their menu features not only “shave ice”, but also “shave snow” that is a combination of milk, water, flavoring, and sugar frozen together.  Of course we had to try both and loved both!  Shown below the blue is the “ice” and the red is the “snow”. 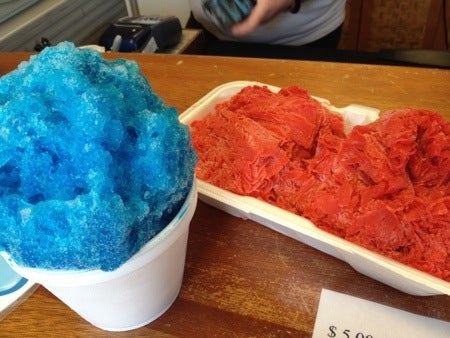 Another shave ice company that gets consistent praise is JoJo’s Anunue, but be careful as there are many different similarly named shave ice shacks, and Heaven forbid you eat anything but the best shave ice available.  We also visited a store that sold shave ice right across from the Poipu Beach playground.  I don’t remember the name, and it probably wasn’t on the “Top 10” shave ice list, but it was still yummy and my kid could have cared less whether or not it was “the best”. 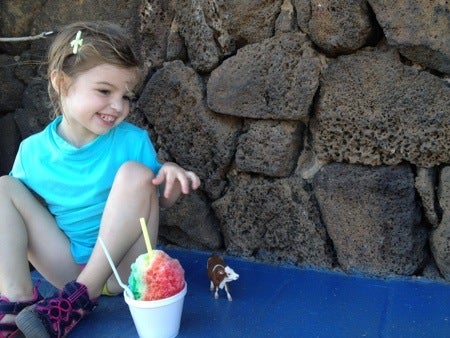 Shrimp:
There are several restaurants in Kauai where the menu is 100% devoted to shrimp.  You know, like in Forest Gump, where “Bubba” lists off all the different kinds of shrimp…   Anyway, the one we had a chance to visit this time was Savage Shrimp, located in the The Shops at Kukui’ula right next to Uncle’s Shave Ice.  This is a serve-on-paper-plates, cash-only joint, and you had to pay $2 extra if you wanted the shrimp peeled for you, but it was worth it.  Savage Shrimp used to be a food truck, but it is now an actual restaurant with some of the same low-key elements that come with a food truck, including some outdoor tables. 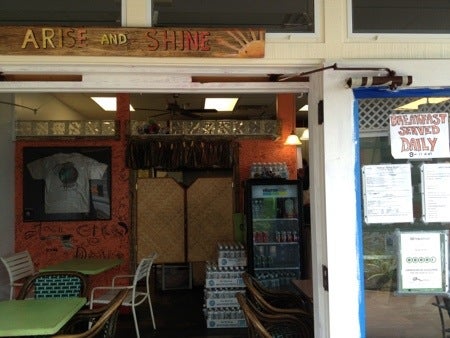 I had the garlic shrimp (which I do recommend), but you can choose from various flavors of shrimp, fish tacos, fish and chips, etc.  My daughter is a shrimp fanatic like I am, so this place was a big win for us.  While we did not make it this time, I have also read good things about Shrimp Station in Waimea. 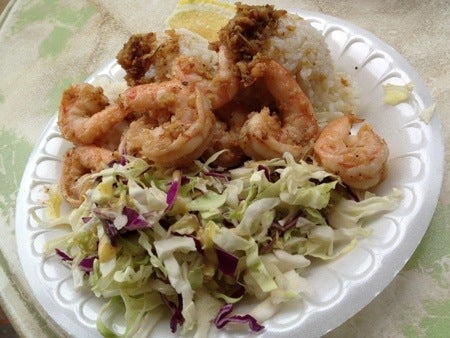 Heck, we even ate shrimp one more time at the airport before leaving the island.  I can’t remember that restaurant’s name, but it was located right next to Starbucks.  The service was slow, but the food was decent for an airport. 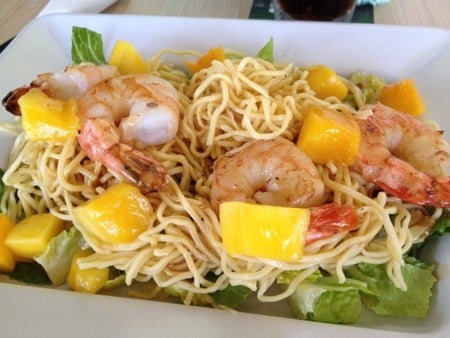 If you are after seafood in general, I have also heard good things about the view and service from the Beach House restaurant in Poipu, though this option is a bit fancier than the shrimp stations and shave ice.
Bubba Burgers:
One of the most consistent pieces of Kauai advice I received was to make sure and eat at Bubba Burgers.  I got this from folks young and old and folks who have been dozens of times as well as those who had just been once.  Lucky for me, this was also located in the The Shops at Kukui’ula with Uncle’s and Savage Shrimp, so it was easy to get to from the Grand Hyatt (though there are also two other locations on the island).  This place had an edge to it and had signs everywhere that it was not McDonalds or Burger King and that they don’t want to serve a burger that costs less than a can of dog food.  Fair point. 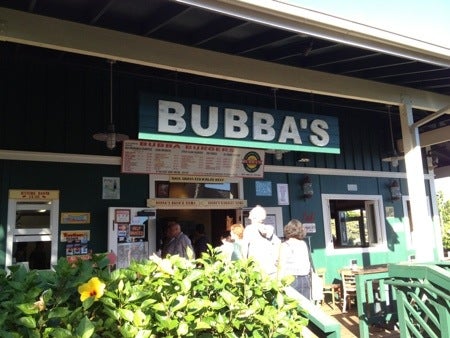 The beef is grass-fed and raised on Kauai and is 88% fat free, yet it was still quite juicy.  The burgers start at $3.50 for a 1/6 pound burger and go up from there.  We got the 1/6 pound burger and shared it as a “snack”.  They also have things like french fries, onion rings, chicken sandwiches, shakes, etc.  I want to try the teriyaki burger next time and grab another Bubba’s t-shirt.  I got one for my husband and he darn near lives in it! 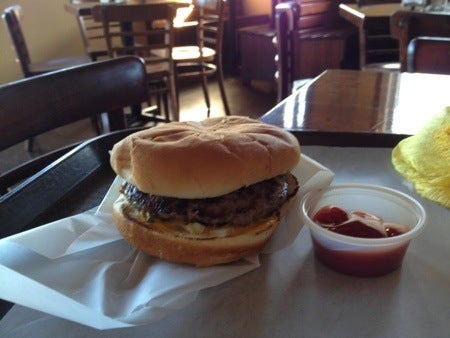 Farmer’s Markets:
A big must-do on our list for next time we visit Kauai (and there is a next time), is visit a Farmer’s Market or two.  This is the way to go to try some local meats, cheeses, produce, etc.  Here is a list of some of the markets, but I would love to hear from those who have visited some as to which are their favorites.
Other Great Options:
A few other options that are worth mentioning based on recommendations are Brick Oven Pizza located on the south shore in Kalaheo, Kilauea Fish Market (outdoor eating/to-go only), and I also enjoyed our outdoor lunch (and drinks) at Gaylord’s at the Kilohana Platnation.  They had a kid’s menu, a little grassy area for C to explore while we waited for the food, and delicious drinks made with local rum. 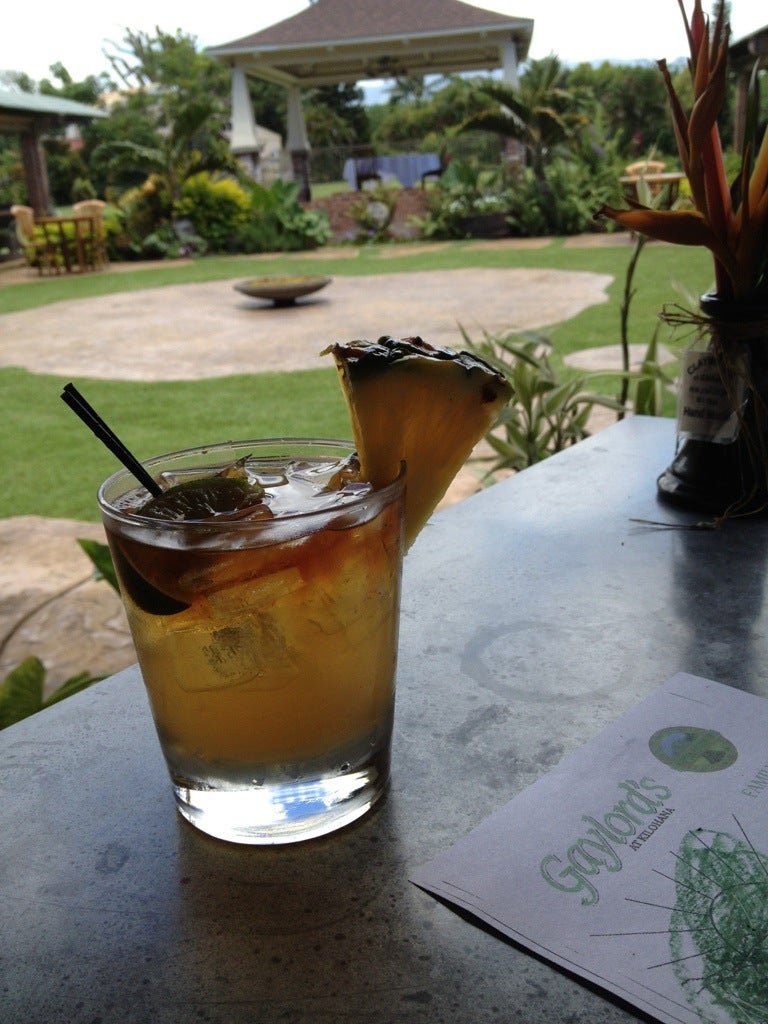 Have you been to any of these spots?  What did you think?  Did I leave off your Kauai favorite?
Sign up for our daily newsletter

Summer Hull aka Mommy Points, ran the Mommy Points site for families who want to travel more for less using miles and points for seven years and now heads up TPG Family when she isn't exploring the world with her own two girls.
You might like
United is bringing back its new flagship Hawaii route next summer
News
1h ago
Hopper jumps into the travel experiences game with PlacePass acquisition
News
2h ago
Amex adds live capacity indicators for Centurion Lounges
News
2h ago
Delta SkyMiles® Platinum American Express Card