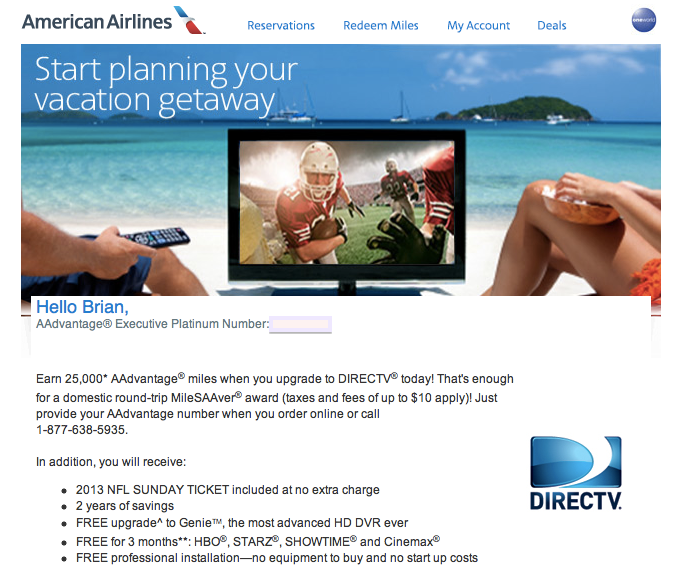 DirecTV Sign-Up Bonuses: 30,000 United Miles or 25,000 AAdvantage Miles - Worth It?
This post contains references to products from one or more of our advertisers. We may receive compensation when you click on links to those products. Terms apply to the offers listed on this page. For an explanation of our Advertising Policy, visit this page.

Every so often, DirecTV teams up with airlines to offer bonus miles in the hopes of luring new customers. I always see these and am curious about them because - well, I love earning 25,000-30,000 bonus miles as much as the next person, but I never really took the time to look into them and see whether I'd be getting a deal by switching that would make earning those miles worth it.

However, now through October 2, 2013 DirecTV has two big offers for new customers: either 30,000 United miles or 25,000 American AAdvantage miles when you enter into a 24-month agreement for their Entertainment package or higher, which got me thinking about whether it's worth taking advantage of one of these offers and how much more you might end up paying if you are interested in scoring these bonus miles.

DirecTV offers five different cable packages ranging from $29.99 to $91.99 per month that are eligible for this bonus, but since a lot of people like to bundle their services and DirecTV offers home phone and internet service as well, if you want to bundle packages with phone and internet while also incorporating these offers, you will have to call to speak with a sales representative. For the American offer, call 1-877-638-5935 and for the United offer, 1-855-218-3473.

Does It Make Sense For Me?

I live in Miami, but I also priced out options for NYC since I have a lot of friends and TPG readers in the Big Apple. I compared my old Time Warner bill for comparison sake.

For TV, phone and internet service in Miami I have Atlantic Broadband's Get It All Premier Triple Package for a total of $206 per month.

In New York I used to have Time Warner as my service provider with the Ultimate Internet Triple Pack that includes high-speed internet, cable and phone. My TV package was basic since I don't have any premium channels, but I did pay a bit more for their fastest internet. All told, my bill came to about $175 monthly.

DirecTV partners with Verizon to provide customers with a bundled service of cable, phone and internet, but the highest internet speed that they offer is 3Mb per second which is not going to cut it for me. I would have to stick with Time Warner and Atlantic Broadband for the internet speed I need and keep my phone bundled with them, so all that I would need to do is unbundle the cable TV service from my current packages.

Running only my internet and phone service in Miami through Atlantic Broadband would bring that monthly bill down to $107. Once you add in the $57 per month for DirecTV for year one and $82 for year two, I'd be saving $708 over my 24 month DirecTV agreement.

Doing the same in New York would bring my TWC bill to $95 a month, then I'd add in the $51 the first year and $76 the second year for DirecTV, bringing my entire cable/phone/internet bill for New York down and saving myself a total of $515 over the course of the two year contract.

However, not every building in New York City will allow you to install a satellite dish, so always check with your building before getting excited about this option.

So which offer should you take? I value 25,000 American miles at about 1.9 cents apiece ($475) and the 30,000 United miles that I value at 2 cents per mile ($600). Though the United bounty is more lucrative, I'd be tempted to sign-up for the American bonus, simply because they aren't a transfer partner of Amex or Chase (United is a Chase 1:1 partner) and I like using my SPG points for hotels.

Is It Worth It For You?
Granted, there was a fair amount of homework for me to do, and the numbers are based on my individual plans, but if you are interested in this offer, it might be worth seeing if DirecTV can beat your current cable/internet/phone supplier, and even if it can't maybe by un-bundling your services like I am considering, you can might still be able to save money thanks to current DirecTV discounts.

Remember- if you have the Ink Bold/ Plus/ Cash/ Classic cards, always pay your internet/cable bill with them for 5 Ultimate Rewards points per dollar spent. I value Chase points at at least 2 cents a piece, so that is an additional 10% value back in points for paying my bill.

I'm still thinking about whether to do this for myself since I do like the convenience factor of having all my communications expenses on a single bill, but it's looking pretty attractive - especially if it makes me 25,000 AA miles or 30,000 United miles richer. I'm also debating the switch based on the quality of DirecTV's service. While they claim to have 99.9% reliability in sound and picture quality regardless of weather, and that I only need to have an exposure to the southern sky for it to work, I have never used a satellite service before and wonder how much weather will interfere with the signal. Growing up we had it for a while and I remember shoddy service during storms- this could be problematic in Miami as we enter hurricane season. I can deal without TV, but if my internet goes down, I am one very, very, very unhappy camper!

I am also unsure about where the dish will actually be installed in each of my places. The representatives I spoke to assured me that professionals would come to my home (free of charge) and determine where the best placement is - whether on the roof, a balcony, window or pole - and that installation is included in my sign-up, so I'm hoping it would be as easy as they make it seem.

Overall I'm leaning towards making the switch as I think it would be a smart move especially since I'll be getting some valuable miles, but I would love to hear your opinions on DirecTV and if they are a reliable company/service as well as satellite TV (and its issues) in general. Please feel free to comment below with your experiences!