Best Uses of Club Carlson Points in the United States

Thus far, my favorite Club Carlson redemption has been in Europe at the beautiful Mayfair Hotel in London.  I also had redeemed points during the 2014 Olympics in Sochi, but that booking got squashed by the IOC, so that one doesn’t count since it never actually happened.  However, since this is “keeping it real” week here at Mommy Points (real redemptions for real families), I’m going to put those type of redemptions on the back burner for now and look at some of my favorite uses of Club Carlson points here within the US.  As you may or may not know, in general Club Carlson has some “fancier” redemptions outside the borders of the good ‘ole US of A, but that doesn’t mean there aren’t some decent uses of points closer to home.

Use in small cities with temporarily expensive rates due to big events (i.e., the Notre Dame effect):

Truthfully this whole post was inspired by my own recent redemption that really got me jazzed.  We are planning on going with my parents to see the Fighting Irish play a football game in South Bend next football season.  We have to start C’s brain-washing immediately  – she already sings “Cheer, Cheer, for Old Notre Dame…”.  We have been to see a game a couple of years ago, so we know first-hand that getting affordable lodging during a home football weekend can be a challenge there.  It is a small town, but the rates can shoot up for special events like football weekends.  Last time we were there we stayed at a Country Inn and Suites in Mishawaka a few miles from the stadium on what was essentially a mistake rate, or more accurately a promo that was probably not intended to be valid during a football weekend.  We booked WAY in advance, and shortly after we booked the rates skyrocketed.  Rates on non-football weekends can be about $70 per night, but on football weekends the rate can jump to $300+ per night as shown below for a 2013 football weekend.  The hotel wasn’t fancy, but it did the trick just fine.

Naturally now that we are planning a return trip in 2014, I immediately thought back to that Country Inn and Suites since I could use points (you can book way in advance with Club Carlson points), and since I have the Club Carlson Visa my second award night is free.  That meant I am getting two nights for 28,000 points total with no taxes and fees on top of that when the room may very well be selling for about $600 for the two nights.  It is a simple redemption, but one of my favorites of the year because it was exactly what we needed to spend a Friday and Saturday night near the stadium in South Bend, Indiana. 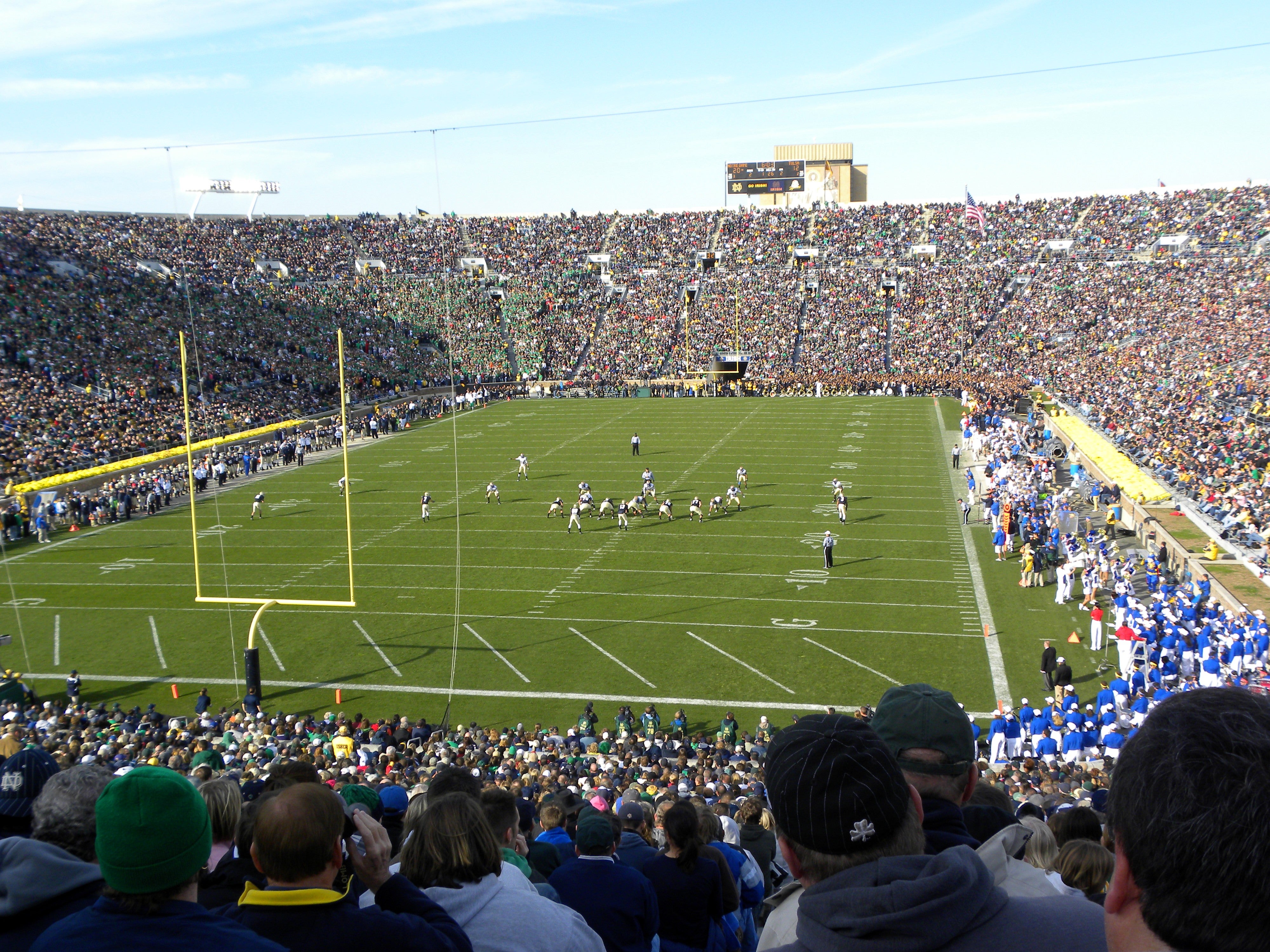 I know not everyone wants to go to a Notre Dame football game, but this same strategy will hold true across the country in small-ish towns that have a Country Inn and Suites, Radisson, etc.  Another example is if you want to attend the Master’s golf tournament in Augusta, Georgia.  There is a Country Inn and Suites in Augusta that seems to already be booked up for the 2014 Master’s dates, however if you want to hedge that you will somehow get tickets for the 2015 Master’s then you can lock points reservations in now at the same 28k per night as in my Notre Dame example (and if you get extra tickets or badges, please feel free to share with me).  Again, you can get the second night free by having the credit card.  Rates may normally be pretty tame in these otherwise fairly sleepy towns, but when a big event hits town the rates can jump exponentially.  Take advantage of being able to book points reservations very far in advance, and certainly utilize the last award night free with the credit card for stays longer than one night.

Use points to stay near Orlando attractions:

While the options aren’t quite as lucrative or numerous as they were a year or so ago, Club Carlson still has many properties in the Orlando area that can be had with points.  A few of the options include: Country Inn & Suites By Carlson, Orlando Universal, Florida (15k per night) and Radisson Hotel Orlando – Lake Buena Vista (38k per night).  Again, if you have the card the second award night is free.  If you and your spouse both have the card it would be pretty simple to get two of your four nights totally free, and the other two nights for a reasonable number of points.

Go to the beach:

If you do tend a bit toward the fancier type of hotels, then one of the Club Carlson crown jewels in the US is the Radisson Blu Aqua Hotel Chicago.  This is a relatively new hotel that goes for 50k points per night, but it looks like a very nice place to spend a few nights in downtown Chicago.

I’ve never been to the Mall of American in Minnesota, but it looks like the perfect way to spend a warm day indoors during the winter months up north, and attached is the brand new Radisson Blu Mall of America that goes for 50k points per night.  In addition to 500+ shops, there are attractions like the seven acres of rides and games at Nickelodeon Universe® or visiting the Sea Life™ Aquarium, both of which are within the Mall of America.

If you want a “big city” experience on points, then the Radisson Hotel Martinique New York-Broadway is absolutely one of the best points deals in New York City.  It is 50k points per night and is located in Midtown on 32nd Street.  This is very close to Macy’s on 34th, the Empire State Building, Times Square, and more.  Rates here are often easily in the $300 – $400 per night range, so using 50k Club Carlson points per night to stay here, or essentially 25k with the card if you stay two nights, is fantastic.  Also remember what I said about booking far in advance…Macy’s Day Parade 2014 anyone?

I’m sure there are other great uses for Club Carlson points in the US, but those are some of the best uses in my book.  Overall I think you can get even more value for these points in Europe, but that is 100% irrelevant if you aren’t heading to Europe anytime in the near future, or if Club Carlson simply isn’t in your travel plans while you are there.  The fact is there are some tremendous uses within the United States.  I’d love to hear some of your favorites!

Disclosure: I do receive a commission if you are approved for a credit card using one of my affiliate links.  As always, your support is appreciated.  Do be aware that US Bank can give you a lesser version of the card if you are not approved for the top tier version.  Thankfully all versions have the last award night free feature!

Summer Hull , aka Mommy Points, ran the Mommy Points site for families who want to travel more for less using miles and points for seven years. She now heads up a variety of special projects at TPG when she isn't exploring the world with her own two girls.
You might like
Go here, not there: overlooked European islands you need to visit
News
6h ago
Relying on ride-hailing services: How to work the system so you aren’t left without a ride
News
7h ago
Alaska Railroad returns to full summer schedule
News
8h ago
Chase Sapphire Preferred® Card