The Grand Hyatt Kauai is an amazing top-notch Hyatt Resort that exceeded my high expectations. My daughter and I stayed there as part of a mom-daughter trip to the Hawaiian Island of Kauai in June 2013. The resort is just too large to fit everything into one post, so this is the second of at least three posts dedicated to that resort. This post will focus on the Grand Club, Camp Hyatt, and the spa. If you want to play catch-up here are other posts in my Hawaiian trip report:

One of the reasons I value my Hyatt Diamond status so highly is that it allows me access to clubs and lounges, when available, at Hyatt hotels and resorts. These clubs offer breakfast, snacks, heavy evening appetizers, water, soda, juices, and desserts all at no additional charge. If you are traveling with a family this can resort in real savings – especially when staying at resorts like the Grand Hyatt Kauai where things can be a little pricey.

If you don’t have Hyatt Diamond status, you can still utilize the Grand Club if you pay an additional nightly fee for a Grand Club reservation (which appears to be kinda pricey at this resort) or use additional points for a Club room (27k points per night as opposed to standard 22k points per night).  Another option is to spend 3,000 points per four nights for an upgrade on a paid reservation to a Grand Club room.  However, since this is a resort property, you must pay a minimum of the Hyatt Daily Rate deluxe room (such as partial ocean view, ocean view, slope view, etc) to qualify for the 3,000 point upgrade to a Grand Club room.

This Grand Club is located on the Poipu side of the resort – which is on the right hand side as you walk in the lobby.  Location is actually really important since the resort is so large.  We were located near the pools on the opposite side of the resort, so it was a very long walk to the Grand Club.  If you have mobility issues or small children it is almost prohibitively far.  We didn’t visit the Club as often as we otherwise would simply due to the distance.

The Club itself is located in three main sections.  When you walk in immediately in front of you are some couches and coffee tables. 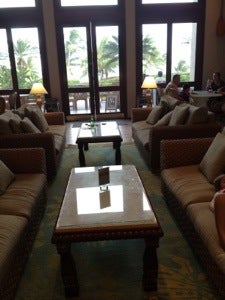 If you go up the stairs to the left you will find the section where the food and drinks are located. 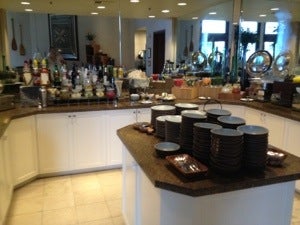 To the right there is another sitting area and eating area (complete with a small kid’s library!). 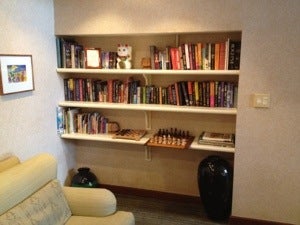 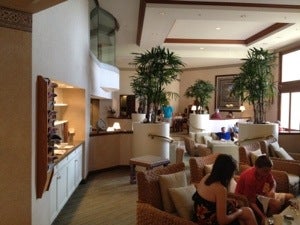 The best views in the house can be found if you head out to the patio directly off from the Club! 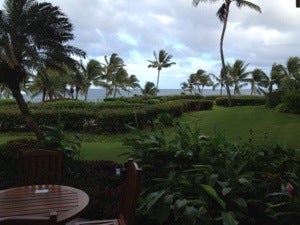 Since I was traveling alone with a three year old, my main goal when selecting a seat and getting food/drinks was somehow to manage to get enough food on our plates while not losing Little C in the process.  Oh well, that and to take blurry, quick, iPhone photos….apologies for the poor quality here.

The first set of photos show some of the evening heavy appetizer options.  You could make this a meal (and we did the first night), but I wouldn’t really want to do that very often on the trip. 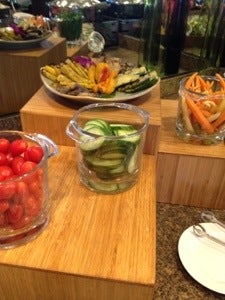 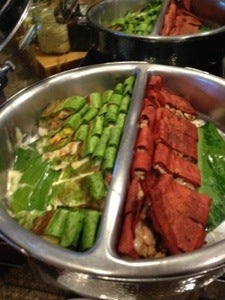 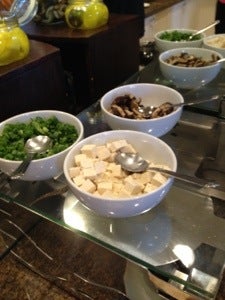 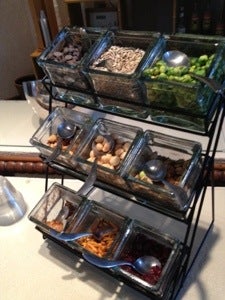 The breakfast offerings consisted mainly of various breads, pastries, fruits, and at least one hot item. 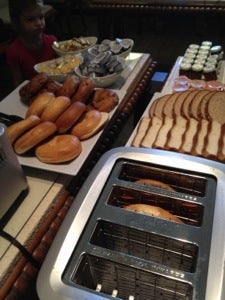 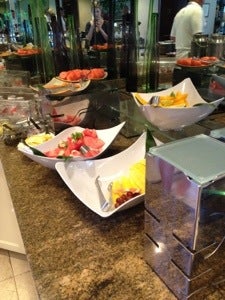 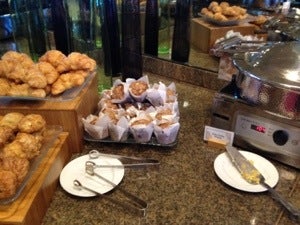 There is alcohol in the club, and it is on an honor system where you make your own and then fill out a card indicating what all you drank so that it can later be charged to your room.  I didn’t have the time or luxury of exploring that option fully on this trip, but it is there. 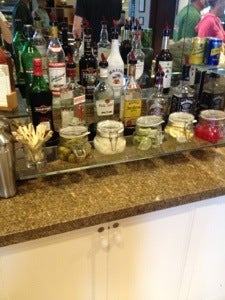 Overall I thought the Grand Club was one of the better ones in the US.  The offerings weren’t “amazing”, but they were above what many clubs offer.  Contrary to what the photos may look like, the club was often pretty full.  Not overly full, but it wasn’t generally as empty as the photos make it appear.  The real drawback for me was just how far from the club our room was situated, but we were right next to the pools, so it was a fair trade.

My daughter is a big fan of Camp Hyatt – and so am I!  We have visited several and she has always had a good time, and has always wanted to return.  This is such a blessing since it allows her to have fun with other kids and it allows me to have a little time to do adult-oriented activities.  At this hotel Camp Hyatt is designed for children ages 3 – 12 (who must be potty trained).  This Camp Hyatt runs from 9:00 am to 4:00 pm and 4:00 pm to 10:00 pm daily with reservations very much encouraged.  A “full day” from 9AM – 4PM is $80 and a half-day is $50 without lunch, or $60 with lunch.  The full evening session is $80 with dinner.  It isn’t cheap, but I think it is totally worth it at least for a day (or half-day)! 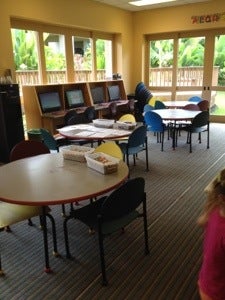 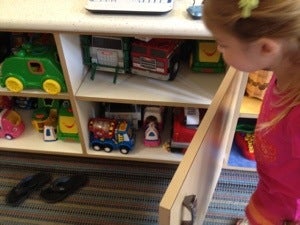 As soon as my daughter established they had toys there, she was set.  Barely even waved bye to me!  Her favorite thing they did that morning was get to interact with some of the parrots they have on the property.  I think her face in this photo says it all!

They don’t just keep the kids safe at Camp Hyatt – they actually keep them entertained and interacting with all the resort has to offer.  I always feel a little guilty leaving her there, but she always is bummed when it is time to leave.  I went to pick her up while they were still eating lunch and she insisted on staying at least until lunch was finished.  I wouldn’t hesitate to recommend this Camp Hyatt! 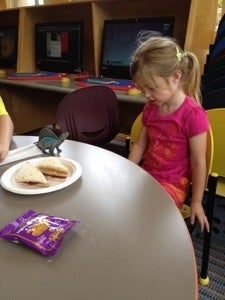 While my little kiddo was at Camp Hyatt, I went next door to the Anara Spa.  My original plan was to go surfing while she was at Camp Hyatt, but the swell that was going on made it look a little dangerous for my tastes and I didn’t like the idea of not being able to be reached if something happened at Camp Hyatt (obviously no cell phones in the ocean).  So, instead I stayed close and just got a massage.

The spa was undergoing renovations while I was there, so there was a discount of $20 for every $100 spent to offset the inconvenience.  The treatment rooms for massages were converted guest rooms overlooking the ocean.  It wasn’t bad, but probably wasn’t the same as the relaxing sanctuary of the spa since you had to trek to and from the rooms in your spa robes before and after the treatments.  The lap pool for the spa was open, but there were folks doing some minor repairs in that area as well. 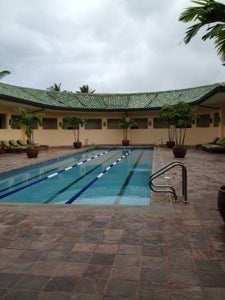 i didn’t take any photos of the treatment rooms – mostly because I didn’t actually go in the real treatment rooms.  The outdoor showers were pretty nice, though.  My massage was good, but I think that the ocean side massage I got at the Hyatt Regency Maui was better. 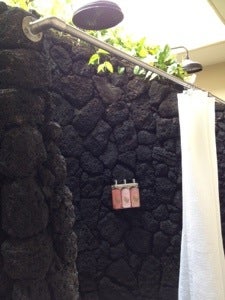 Overall I thought the spa and the Grand Club were very solid offerings at the Grand Hyatt – and I thought Camp Hyatt was outstanding.  However, the real gem of this hotel has to be the pools.  Lots of pictures of the pools and more coming in the next post in this series!

Summer Hull aka Mommy Points, ran the Mommy Points site for families who want to travel more for less using miles and points for seven years and now heads up TPG Family when she isn't exploring the world with her own two girls.
You might like
3 ways Disney is becoming a more magical, inclusive place to visit and work
News
6h ago
Marriott’s planning to open 8 new Edition hotels by the end of 2022
News
8h ago
Lincoln Center Plaza will transform into a green space
News
9h ago
Chase Sapphire Preferred® Card