My Extreme Hassle Getting Double Charged at the Driskill Hotel 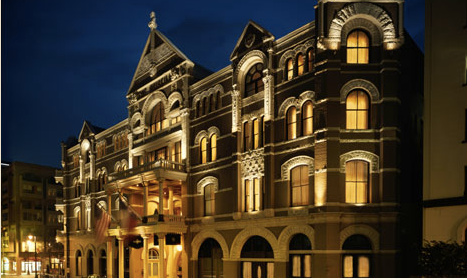 My Extreme Hassle Getting Double Charged at the Driskill Hotel
This post contains references to products from one or more of our advertisers. We may receive compensation when you click on links to those products. Terms apply to the offers listed on this page. For an explanation of our Advertising Policy, visit this page.

Back in mid-April I attended a friend's wedding in Texas and stayed two nights at the Driskill hotel and one night at the Hyatt Place Austin Downtown. While the Driskill is nice in an Old West Victorian kind of way, my less-than-satisfactory experience with their billing department after my stay is what completely ruined my perception of this beloved hotel, which is now part of the Hyatt brand.

In addition to the one room I had already booked, a few days before my trip I called Hyatt Gold Passport to see if I could book another room using 18,000 points for one of the nights. Originally the representative told me the hotel was completely sold out, but I had contacted the hotel directly a few minutes prior and was told there were around 35 rooms still available. The representative placed me on hold quickly while she called the hotel herself to see if that was the case.

Once the rep returned she said there were in fact rooms available and the hotel just had to open up the inventory so that my room could be booked with points. Again I was placed on hold while they took care of this. Several minutes went by before the representative kindly explained that the Driskill is new to Hyatt and using Gold Passport points so they had to assist them with booking the room correctly.

Eventually the process was completed and I received two emails confirming my stay. The first email showed that the room was booked at a paid rate of $289 per night. The second email was a "reservation change," which showed that the room rate was booked correctly under points instead of cash. To my understanding everything had been resolved and successfully booked the way I wanted it.

The morning of check out I was in a rush to get to my friend's wedding so I left in a hurry without reviewing my bill. Had I done that I would have seen that I was being charged the paid rate for the room on top of already having the 18,000 points deducted from my account when I initially made the reservation. As always, I'd double check the folio on hyatt.com to make sure I wasn't charged for anything like WiFi, but never have I been charged a revenue rate when using points.

The Drama Begins
About a week after my stay I noticed that I had a charge on my credit card statement from the hotel for $320.95. I knew that I hadn't incurred those charges since I had used only points so I immediately called Hyatt Gold Passport to try to have it reversed. They informed me that I would have to take the issue up with the hotel's accounting department as they had no control over that charge. Here's where the extremely frustrating three-week runaround began.

After several phone calls and voicemails left for an employee in the Driskill's accounting department I finally heard back and was able to explain the situation to them. She seemed to understand and told me she would look into the reservation. A few days went by and I hadn't heard back, I was persistent and would leave voicemails asking for her to please let me know what was going on. When she finally called back she told me that the reservations manager would be calling me to discuss the issue and get it resolved.

At this point I was annoyed, but hopeful that the manager would be able to quickly fix the issue. Once he called me, I again had to go through the entire situation and he had me forward him the emails that confirmed my reservation and the rate and he assured me that he would get it taken care of after and said he would let me know if he had any questions. This was on May 7th...and I had originally contacted the hotel around April 22nd, so you could imagine my patience was wearing thin.

The following day I followed up with the an email asking if the refund was being processed and to see if he needed any more information. Fast forward to two weeks later when I still had not heard back from him or the employee from the accounting department after having sent multiple emails and left voicemails for both of them.

On May 22nd I decided enough was enough and called the hotel and requested to speak to whatever manager was on duty. For the third time I explained the situation and how frustrating it has been being ignored for weeks. This employee was very apologetic, but once again I was told that they had to look into it because it was accounting that had to process the refund. This time he emailed several employees with my information and reservation details asking someone to please take care of it.

Miraculously that evening the originally employee from the hotel's accounting department called me. She acted like she vaguely remembered what the issue was, which further confirmed that I was not even remotely on their radar, then looked up my transaction and within two minutes said I would be receiving a refund receipt. Seriously? That's it? How come that couldn't be done the first time we spoke over three weeks ago?

I managed to keep my cool and thanked her for finally getting this taken care of, but I asked if it was possible to be awarded some Hyatt points for having to deal with such an aggravating situation. Of course she told me she would need to "look into it," but I haven't heard anything yet and don't expect to after seeing how uncommunicative they were throughout this whole process.

The biggest lesson learned here is you must always check your folio and statements to make sure that nothing pops up that isn't supposed to be there. Had I not gone over my credit card statement I would have never seen the charge so I would have been out $320 and 18,000 Hyatt points.

That brings me to another good point, which is that in cases like this, your credit card is your ally. When I noticed the charges on my statement, I should have called the hotel to see if they could rectify the situation in a timely manner and issue a refund, but when it became clear that they couldn't or wouldn't, my other option was to call my credit card and ask them to dispute the charge. That way they get the headache of dealing with it and I wouldn't have to pay the charge in case my statement closed before the resolution of this.

Unfortunately, I can't get back the hours of hassle, but I do hope Hyatt Gold Passport does me good and gives me at least 10,000 points for the hassle!
[card card-name='Starwood Preferred Guest® Credit Card from American Express' card-id='22034416' type='javascript' bullet-id='1']