This spring my husband, daughter, and I headed to “The Mouse House”, otherwise known as Walt Disney World. I took my daughter to Disneyland in California roughly a year before this trip, and while both trips were very fun, there was a tremendous difference in experiencing Disney with a two year old, as opposed to a three year old. I know many parents have to make the decision about when is the “right time” to take their kids to Disney, and I have to say that sometime between three and four years old there is a big change that makes the parks much more enjoyable for everyone.  If you want to check out other related posts from this trip:

There are many big changes from two years old to closer to three or four years old that make a big difference. In no particular order some of those are stamina, excitement about the parks and characters, less time messing with accidents and/or diapers, having them able to take a more active role in planning the day, but the biggest in terms of the Disney parks is height. Fortunately even infants can go on many of the gentle and slower rides, but unless you are a certain height, certain rides are understandably off-limits. My three year old is tall for her age at 42 inches, but she was able to do all of the rides at Magic Kingdom and Epcot except for Space Mountain and Mission Space.

That meant that in addition to all the nice and gentle “kiddie” rides, she was able to do Big Thunder Mountain Railroad, Test Track, Soarin’, and would have done Splash Mountain if it hadn’t been closed for repairs. There is that very real risk that your kid won’t be mentally or emotionally ready for the big and fast or dark rides, but our kid loved all of it. Being able to experience those sorts of rides with her made the experience so much more fun for all of us. In my view, 40 inches is a very magic number in terms of a greater variety of rides being available to your kiddo. She was measured with a stick once to ensure she was tall enough, so both for safety and practical reasons don’t try and cheat the height requirements. Use this site to check the height restrictions for various rides.

In addition to her being able to partake in a greater number of rides, she was also just able to get into the whole thing so much more. She got excited when the princesses came around during the princess breakfast. She knew their names and was thrilled to take pictures with them. 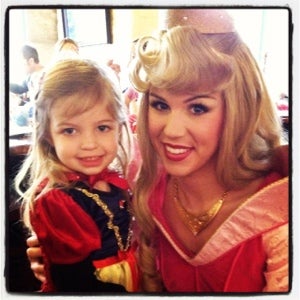 SPOILER: She was able to take a role in the new Storytime with Belle in Disney World’s Fantasyland and was genuinely amazed (as I was) when the mirror transformed at the beginning of the attraction.

She was also able to comprehend waiting in line, and did it several times up to 45 minutes long. Of course we used Fast Pass as much as possible, but some attractions like Storytime with Belle don’t have Fast Pass options, so your only choice is to wait. This is potentially easier with a three or four year old than a two year old as they are a bit more used to “taking turns” and being patient. 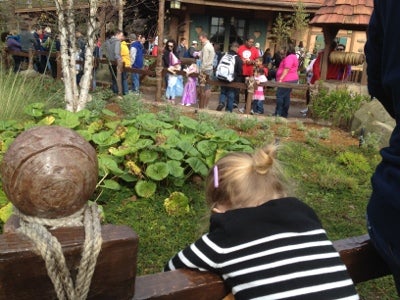 I’ve also been to Disney World with her (then) four and six year old cousins, and those were also great ages. While there is no wrong age to go to Disney World as they truly cater to all ages and abilities, I really think it makes sense to target at least the 40 inch requirement unless you plan to go so frequently that it doesn’t matter if it is the “right” age or not. I can tell you without a doubt that going at three was more fun than going at two, and that is saying a lot because we also had a blast at two.  I do want to point out that at three she had to have a ticket whereas she was still free at two, so having more fun comes at a cost.

What are your thoughts about the ages (or heights) of children and heading to Disney parks?

Summer Hull , aka Mommy Points, ran the Mommy Points site for families who want to travel more for less using miles and points for seven years. She now heads up a variety of special projects at TPG when she isn't exploring the world with her own two girls.
You might like
Why I’m still traveling with COVID-19 tests
News
6h ago
Deutsche Bahn joins Star Alliance to become first non-airline member
News
7h ago
EasyJet’s COO resigns amid flight cancellation chaos
News
8h ago
Delta SkyMiles® Platinum American Express Card