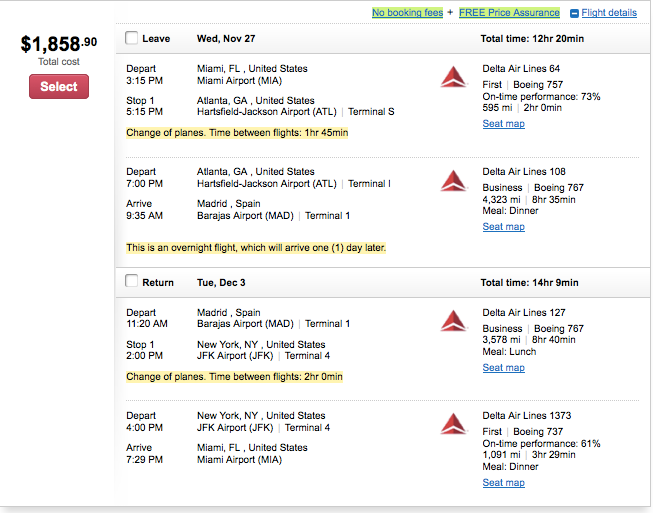 Cheap Thanksgiving Business Class Flights To Europe Are Back! JFK To London $1,613, Total Roundtrip
This post contains references to products from one or more of our advertisers. We may receive compensation when you click on links to those products. Terms apply to the offers listed on this page. For an explanation of our Advertising Policy, visit this page.

Every year many carriers discount premium tickets to Europe by up to 50% or more. Some fares even work for Christmas/New Years travel and recently many of these fares were filed. Many just require a Saturday night stay, but some do require a week. Play around with ITA software so be flexible to find the lowest fares. Remember, you can't book your flight on the ITA Matrix, once you know your dates and flight numbers you can look up the trip by going directly to the airline website or your preferred online travel agency such as Orbitz to book.

The fares I found were generally cheapest from New York City, and a lot were on Delta, though I did find some other decent (not awesome, but good) options from other cities. Here's a quick hit list of the sample fares I found.

Here are the itineraries themselves.

JFK to London on Delta for $1,613.00 (codeshare with Air France), departing on November 26 and returning on December 2. The Delta 767 aircraft are fitted with the BusinessElite seats with 60 inches of legroom and 160-degree recline.

Newark EWR to London Heathrow for $1,613 on United from Tuesday, November 26 - Monday, December 2.

Comparable flights just a week later were going for $3,821 on British Airways, American, United and Virgin Atlantic - pretty much standard from this route, but over twice as much as the low Thanksgiving fares!

It's not just to London, though. You can get from JFK to Madrid on Air France (operated by Delta) and Air Europa through Barcelona for $1,658.

And from JFK to Munich aboard Lufthansa for just $1,689.

Or choose JFK to Rome on Lufthansa through Munich, returning on Brussels Airlines through Brussels for $1,784.

Although things there are unsettled at the moment, the fall is a lovely time to visit Istanbul (I went in December myself) and hopefully things will be calmer then, so if you're interested, you could fly JFK to Istanbul on Lufthansa through Frankfurt for $2,055.

Or if you're a SkyTeam flyer, you can travel JFK to Istanbul on Delta through Amsterdam (the AMS-IST flights are operated by KLM) for $2,051.

While I wouldn't call $2,000 business class airfare an amazing deal, it's still a better figure than what you'll be paying to fly a week later on the same routes, which is more in the range of $3,325 on the non-stop from Turkish Airlines.

Washington Dulles didn't pull up too many interesting options, but you can get to London on United for $2,033.

Venturing on to other cities - I looked in Miami, where I'm based, to see what was available and found a few interesting options including a roundtrip flight from Miami to Madrid on Delta from Wednesday, November 27-December 3 via Atlanta on the outbound and JFK on the return for $1,859.

Whereas British Airways, American and Iberia will all charge you close to $5,000 for those same dates.

There were also a few deals to be found farther west, including this itinerary from Chicago to London on United for $2,033.

As well as flying Chicago to Paris on United returning through Brussels for $2,186.

One of the better options was taking Delta from Chicago to Madrid via Atlanta on the outbound and returning through JFK with both the domestic flights in first class for $2,069.

Chicago to Rome on United through Dulles also clocked in at $2,181.

Unfortunately, fares from the West Coast aren't quite as attractive, but they're still at a significant discount from how high fares normally run.

You can get from San Francisco to London over the holiday for about $2,391 flying Delta via JFK on the outbound and Minneapolis on the return.

While not inexpensive, that's a full $1,000 less than flights are going for just a few days later and throughout December, when you'd have to fly Frontier to Denver then Icelandair via Reykjavik or pay around $5,600 for the same routing on Delta.

Less impressive is the lowest fare I could find from Los Angeles to London, which came in at $2,453 on Air New Zealand.

Still, it's a far cry from nonstops from Los Angeles to London on British Airways November 11-18, which would cost $5,1o6.10 - over twice the price of the Thanksgiving weekend Air New Zealand flight.

Finally, just for some variety, I searched for some Denver fares and found this one to London through New York and returning through Minneapolis/Saint Paul on Delta for $2,391.

As well as this itinerary from Houston to Paris on Air Canada via Toronto (IAH-YZZ flights are operated by Air Canada Express Jazz) for $2,174.

Caveat Emptor
There are a couple of things to keep in mind before you go crazy booking business class fares.

First, these fares are still expensive and not for everyone - especially those hitting over $2,000. But even the expensive ones can be discounts of up to 50% on certain routes, and I figured they were worth reporting on - especially if you can take advantage of them for upcoming travel.

Right now, if you're a Oneworld flyer, you probably won't have much luck finding discounted flights - American, Iberia and British Airways weren't giving me any love, though they did participate last year so I expect them to load discounted fares sooner or later (I did see some NYC to Paris for $2,300, but I bet it will go lower).

I only searched about a dozen different routes and fares to get a feeling for what was on sale, but if you score an amazing deal or find out new information on any of these or other destinations you can get at huge savings, please share it with the rest of us in the comments below.

As always, check out this post for maximizing airfare purchases so you get as many points as possible for the actual purchase- especially important when buying premium fares!
[card card-name='The Platinum Card® from American Express' card-id='22504813' type='javascript' bullet-id='1']