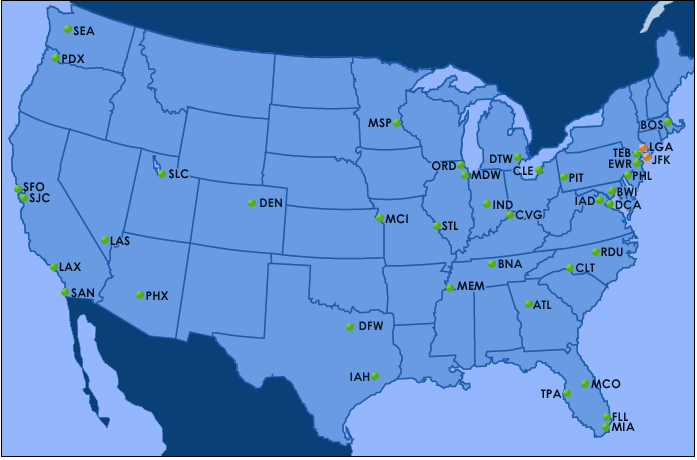 Sequestration Air Traffic Control Cuts Go Into Effect - Tips On Avoiding Huge Air Travel Delays
This post contains references to products from one or more of our advertisers. We may receive compensation when you click on links to those products. Terms apply to the offers listed on this page. For an explanation of our Advertising Policy, visit this page.

Well, today's the day that Congress's sequestration cuts finally go into effect for the FAA and air traffic controllers have to start taking one furlough day per 10 work days.

The FAA and major news outlets are all predicting huge delays - up to 6,700 flights per day - but is all this going to effect the summer travel season or is it just fear mongering?

A quick look at the Flight Delay Information page on the FAA's website shows that just two major airports are reporting delays - LaGuardia and JFK, and neither is related to the cuts (at LaGuardia it's because of wind and rain), although last night there were apparently delays of up to 3 hours at LAX due to staffing issues, the FAA claimed, though they seem to have been resolved at this point.

According to this New York Times article from last week, officials are predicting regular delays of just under an hour at O'Hare, while Newark, JFK and LAX are all expected to average under 20 minutes, and most airports are expected to experience much shorter delays directly due to staffing issues.

Although there doesn't seem to be a widespread impact just yet, chances are we'll start seeing some traffic snarls in the coming days and weeks, but there are things that you can do to be prepared and cope so you're not stuck sitting in airports for hours on end.

1. Use an App: First, if you are traveling, be sure to check your airline's flight status page. The FAA has a handy web page that links to the major domestic airlines' homepages, but also download airline apps and ones like TripIt to your PDA so you can get up-to-the-minute flight status updates and airport information on the go.

2. Check Flight Status: One way to find out the delays for your airport is by checking FlightStats, which has a map with updates. Right now there is good weather across most of US and few flight delays, but that could change as the situation develops.

3. Use ExpertFlyer: You can also use Expertflyer.com to search for flight availability on alternate routes if your flight is delayed, especially if you have a connection you may miss, including routing through alternative airports. If there are massive delays, airline should let you change your flights the same day if you ask, so be proactive and stay on top of the situation.

At this point, no one really knows how this will impact air travel long-term. There is a certain level of fear-mongering going on in the media and political circles to put public pressure on Congress to resolve the sequestration cuts and increase FAA staffing back to normal levels.

In general, our air traffic control system is outdated and requires a lot of manual input, so while whether or not these furloughs become a huge issue remains to be seen, but it is a definite possibility.

The other major concern is safety, especially since controllers manually manage all incoming and outgoing flights. I hope this doesn't lead to any incidents or "near misses" when airplanes need to go around again, which happens frequently in already-crowded airspace such as that around New York City. With fewer eyes watching the skies, there's more of a chance for something like this to occur.

I don't want to be an alarmist and only time will tell whether these cuts will truly create a systemwide crisis, but if you are planning to travel in the coming days, pay attention to the situation, check your flights and airlines, and be proactive about changing your itinerary if you need to so you don't lose hours of your time waiting for your flights.
[card card-name='Chase Sapphire Preferred® Card' card-id='22125056' type='javascript' bullet-id='1']

Related stories
Round-trip flights to London from US as low as $346
What are points and miles worth? TPG’s October 2022 monthly valuations
Alaska Mileage Plan top-tier members get intriguing choice of perks for 2023
The newest airline collectible is out: KLM’s 103rd Delftware miniature house
Featured image by There aren't any air traffic control-related delays at the moment.