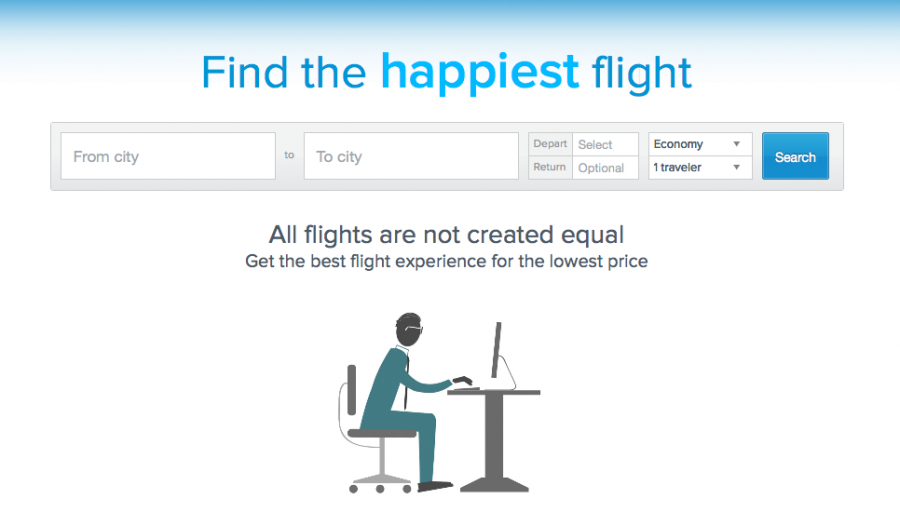 Routehappy Adds Ticket Prices to Flight Search
This post contains references to products from one or more of our advertisers. We may receive compensation when you click on links to those products. Terms apply to the offers listed on this page. For an explanation of our Advertising Policy, visit this page.

As I’ve written about before, Routehappy is a cool new site for travelers that rates airlines and specific flights based on user-generated reviews of everything from the type of seats to the WiFi availability to entertainment options.

This morning, Routehappy launched a new generation website with Meta search that matches its “Happiness Score” to a low-fare search engine with pricing and availability from Amadeus, a fare search engine so that users can price out specific flights. Both airline ratings and fares will now show up side by side, giving users another factor to determine which itineraries to book, though they will have to purchase directly with the airline or a travel booking engine.

As of now, Routehappy users can search American, Delta, United and Priceline and the site will add Air France, KLM and Alitalia in May, with the plan to continue adding booking partners to the website.

What sets Routehappy apart from most online booking engines is that it can tell you the precise type of aircraft on your route and has up-to-date information on what exactly is on board. While not 100% perfect (especially since many airlines swap equipment at the last minute), it is a good indicator of what to expect- especially for the average consumer that may not be so well versed about the details of airline and aircraft amenities.

Among the factors Routehappy takes into consideration are:

-Aircraft version: This lets you know whether you’re flying the newest plane loaded with the latest technology
-Seat: There are over 25 different types of seat that the site compiles data on including legroom, width and style
-Seat layout: Want to know if you’ll be sitting next to one person or three? This analytic will show you which of the over 55 variations you’ll be flying
-Entertainment: Everything from monitor size to movie library
-In-seat Power: An essential for road warriers and iPad addictees
-WiFi: Another great way to determine which flight to book if you need to stay connected
-Duration: Is it worth taking that long non-stop or breaking up your trip
-Flyer reviews: Real life reactions and ratings from other travelers

Routehappy takes all this data as well as information from airline websites, airline staff, industry analysts, blogs, forums and news stories, compiles it with a proprietary database called “Flightpad” and then matches this information to dynamic flight availability so that travelers can get the metrics on their specific itinerary.

But Routehappy’s real unique factor is its “Happiness Score,” which is an aggregate of all these metrics. While today, flyers make travel decisions based on price, schedule, Routehappy integrates the overall experience into the purchase decision. With the site’s new pricing capability, flyers can now find all three decision factors in the same place. After all, how many times have you found two flights that are the same price and fly roughly the same schedule but don’t know which to choose? The Happiness Score and the factors it includes are the missing factor in making your decision and will be based on the things that will help you decide anyway such as the newness of the aircraft, the availability of entertainment and WiFi and more.

When you search for a particular route, you can sort the results by overall Happiness Score as well as price, departure time, travel time, airline or alliance, and specific airport.

I was curious about the site’s new look, so I took it for a test flight earlier this week on a couple routes.

The first is a sample JFK-LAX roundtrip since it’s a high-competition route with some of the US airline’s most updated products.

Virgin and JetBlue earned all the top spots in terms of Happiness Score – which isn't too surprising because both airlines cater towards the economy class crowd, offering lots of amenities (like Dunkin Donuts coffee and free snacks on JetBlue). While those two came in at the top of happiness, several other airlines including United and American came in at lower fares.

This put the new metrics of the sight in sharp relief since it will be these two numbers – score versus price – that I suspect most flyers will be weighing against one another. While the concept of a happiness score makes sense, I wonder how many consumers will pay a premium to have a "happier" flight. Time will tell. but my gut says that most economy class passengers will go with the cheapest flight or the carrier where they're seeking elite status or miles.

The other thing I noticed was that US Airways ranked above both Delta and American though that was only because the US Airways flights noted were United codeshares, so they were essentially duplicate results, and the fact that entertainment on these flights is on the overhead whereas with Delta and certain American flights at least it is on-demand. So I wouldn’t go by Happiness Score alone, but would use the filter functions to search not only non-stop flights but also the other amenities available.

The other route I chose was a high-traffic international itinerary from Los Angeles to Tokyo in business class since a lot of airlines fly it and business class can vary a lot.

Not surprisingly, Singapore Airlines came out on top with a high score of 9.2 on the Happiness scale and “Elation” though traveler reviews were just average.

Delta came in second at 9.0 with “decent” flyer ratings, though the only difference I could see was that WiFi might be available on Singapore and the in-seat plugs have international adapters which Delta’s might not.

What was more interesting (at least to me) was that if I narrowed down the results just to ANA flights the scores varied widely because of the type of aircraft.

This pinpoints a function of Routehappy I think is really useful, which is highlighting the latest premium products on airlines that are in the process of converting their business or first class so you know that you’re getting the best available classes of service on the routes you’re flying and don’t have to exhaustively research the conversion rates of various aircraft.

However, that metric does have some shortcomings. For example, only some of Delta’s 767-300’s are converted to its BusinessElite fully lie-flat seats, but when I searched for a flight from Atlanta to Paris in business class on Delta, the best Routehappy was able to tell me was that my seat might be the old-style cradle seat or a fully lie-flat seat, so I’d still have to go check the aircraft configuration on Delta.com.

All in all, though, Routehappy does a very good job at compiling lots and lots of data and putting it all together for you in one place, and adding in the pricing is another fantastic step that will make choosing flights that much better (and provide hours and hours more of engrossing research for aviation geeks like me!).
[card card-name='Premier Rewards Gold Card from American Express' card-id='22035076' type='javascript' bullet-id='1']