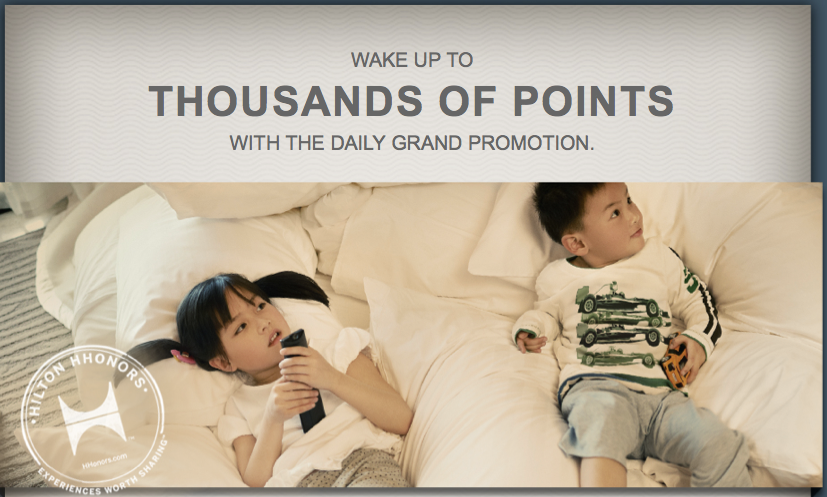 Saturday Recap: My Latest Round of Applications, Enter to Win 100,000 SPG Points, Hilton Daily Grand Promo, British Airways and American Airlines Premium Fare Promotion, Alaska Airlines Now Offers One-Way Partner Awards
This post contains references to products from one or more of our advertisers. We may receive compensation when you click on links to those products. Terms apply to the offers listed on this page. For an explanation of our Advertising Policy, visit this page.

My Latest Round of Credit Card Applications: This week I wrote a series about my most recent round of credit card applications. The first post covered the basics of credit and how to perform a personal check to make sure everything is healthy before a round of applications. Post 2 talked about evaluating your current credit cards and deciding which to close. Post 3 evaluated the top current card offers and which offers to go after and which to hold off on and my own application process. Post 4 explained how to conduct a personal credit card inventory and decide which cards to keep and those to cancels. As you follow the series, you can see how and why I applied for 5 new cards which were the: Mercedes-Benz Platinum , United Explorer, Virgin Atlantic American Express, CitiBusiness AAdvantage Platinum Select World Mastercard and the Club Carlson Visa. Through these sign-ups, I will earn 315,000 miles/points just from bonuses alone.

Enter to win 100,000 Starpoints: Starwood Preferred Guest launched a fun Facebook promotion where you can win 100,000 SPG points by taking pictures of your spring travels. Here's how it works: First, snap a picture of your favorite spring travel moment. Then, submit via Instagram or Twitter and include #SPGspringWIN in the caption. You must follow @SPG on Instagram or Twitter to enter and win. The contest goes now through April 5, 2013. The Grand Prize winner will be determined by based on the following criteria: Artistic appeal of the composition and subject matter (40%); Topical relevance (travel, luxury, mention of SPG) (40%); and overall quality of the image (20%). Here's the rest of the Terms and Conditions. Good luck and let's hope a TPG reader can win these points!

Alaska Airlines Now Offers One-Way Partner Awards: Alaska Airlines has recently begun offering one-way awards on their partner airlines, as well as the option to combine different partner awards into a round-trip award. Alaska Airlines has over 15 airline partners including American Airlines, British Airways, Cathay Pacific, Delta, Emirates, Air France, KLM and LAN to name a few, so if you have a bunch of Alaska Airlines miles saved up, you will now have a lot more redemption options open to you. Hat Tip: View from the Wing

Hilton Daily Grand Promo – 1,000 Weeknight and 2,000 Weekend Bonus: As a recap from earlier this week, Hilton announced a new promo where you get 1,000 bonus points every weeknight you stay at one of their hotels and 2,000 bonus points for every weekend night between April 1 – June 30, 2013. You must register here before your stays to earn the bonuses. Only paid stays (not award nights or cash & points stays) qualify. There is no limit to the total amount of bonus points earned during the promotion period. Per the T&C: For the purpose of this offer, “weekend night” is defined as Friday, Saturday, or Sunday for all regions except for hotels within the Middle East and Africa where “weekend night” is defined as Thursday, Friday, or Saturday.

Earn Bonus SkyMiles When Flying Delta: Delta has launched a new promotion for those who are lucky enough to be targeted. SkyMiles members will receive 1,500 bonus miles for flying nonstop flights between Los Angeles International Airport (LAX) and New York's John F. Kennedy International Airport (JFK) or 1,000 bonus miles for all other Delta, Delta Connection or Alaska Airlines flights. There's no limit to the number of miles you can earn. Just book by May 21, 2013, and travel by June 21, 2013. You must register first by May 21 to be eligible. Allow 6-8 weeks after the promotion has ended for the bonus miles to post. *This is a targeted promotion.

Enter to win 240,000 Hawaiian Miles: Hawaiian Airlines is celebrating the launch of their new route to Auckland, New Zealand, and is offering customers the chance to win 240,000 Hawaiian miles. That's enough miles for two economy tickets from the U.S to Auckland. Now through March 31, 2013, customers can visit Hawaiian's Facebook page and take a quick quiz about Auckland, and then will be entered into the drawing. The contest is open to legal residents of the U.S. and you must be 18 or older to enter. Hat Tip: Frugal Travel Guy