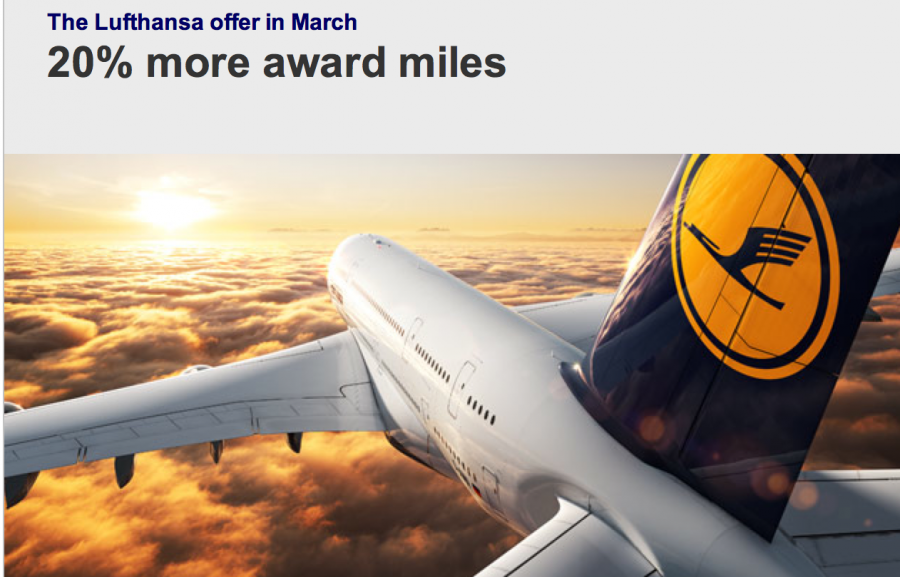 Saturday Recap: 20% Mileage Bonus for Miles & More members, Delta Increasing Service at Los Angeles
This post contains references to products from one or more of our advertisers. We may receive compensation when you click on links to those products. Terms apply to the offers listed on this page. For an explanation of our Advertising Policy, visit this page.

20% Mileage Bonus for Miles & More members: Now through March 31, 2013, Lufthansa is offering a 20% mileage bonus on award miles for their Miles & More members. They are offering this promotion as a way to celebrate the 20th anniversary of the Miles & More program. To be eligible, you must be one of the first 20,000 people to register for this offer and fly Lufthansa operated flights in any class of service. The offer only applies to award miles - HON Circle miles as well as status miles are excluded. There is no limit to the amount of bonus miles you can earn through this promotion.

Delta Increasing Service From Los Angeles: Delta announced that it will be adding new flights on various routes to and from Los Angeles including to Nashville, San Jose, California, and Spokane, Washington, this summer. It will also be offering service to San Jose, Costa Rica and increasing other route frequencies to markets including Puerto Vallarta and New Orleans. In addition, the airline will be offering full flat-bed BusinessElite seating on four of its seven daily transcontinental flights from New York JFK. Delta recently renovated their SkyClub at LAX, and is really trying to focus on the Los Angeles market. By this summer, Delta will have 118 daily departures to 40 nonstop destinations out of LA.

Finnair To Join American, British Airways and Iberia Partnership: Finnair, the national airline of Finland, announced earlier this week that it plans to join fellow Oneworld members American, British Airways and Iberia in a partnership to enhance their combined transatlantic offerings. In joining the partnership, Finnair will add codeshares to 90 select AA, BA and Iberia flights between the United States, Canada, Mexico and Europe at some point later this year. This will add approximately 20 new North American destinations for Finnair passengers, and open the airline's extensive Northern Europe and Baltic Rim network to its trio of partners.

Save Up To 50% On Accor Hotels Throughout Asia Pacific: Travelers planning a trip to Asia between March 27 - June 30, 2013 may want to take a look at a great new offer from Accor of 40% off stays at its 340 hotels and resorts across the Asia Pacific region. Accor Advantage Plus member can save an additional 10%, effectively cutting their hotel budget in half. Trips must be booked by March 12, 2013, so start making your plans now!

Earn 3,000 AAdvantage Miles and a 30% Budget Car Rental Discount: Travelers looking to rent a car between now and April 30, 2013 can earn up to 3,000 bonus miles on American and up to 30% off their car rental. Those renting a car for 2 days will receive 750 bonus miles, while those renting 3-4 days earn 1,500 and 5 days or more will net you 3,000 additional miles. AAdvantage members should use coupon number MUAZ062 when making their reservation, and U072422 is the Budget Worldwide Discount number to receive 30% off the auto rental.
[card card-name='Chase Sapphire Preferred® Card' card-id='22125056' type='javascript' bullet-id='1']

Featured image by Lufthansa is offering a 20% mileage bonus for Miles & More members.