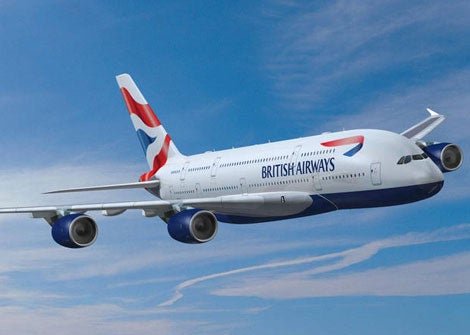 British Airways A380 Will Fly LAX-LHR Starting in October With Special Discount Fares
This post contains references to products from one or more of our advertisers. We may receive compensation when you click on links to those products. Terms apply to the offers listed on this page. For an explanation of our Advertising Policy, visit this page.

British Airways announced that the first route to be serviced by its new A380 aircraft will be Los Angeles (LAX) - London Heathrow (LHR) beginning October 15, 2013. The second destination, Hong Kong, will be added on November 15, 2013. British Airways will be the first UK-based airline (not there are that many) to fly the A380.

$830 still isn't that cheap, but as you can see, the fare itself is only about $150 and it's the taxes and fees that add up to $630! Still, compared to what fares are like this spring, it's something of a bargain since it's $175 cheaper than the lowest fares I could find in April:

Back in September, I mentioned that BA's order of 12 A380s had been pushed back to late 2013, but that I was hoarding Avios points in anticipation and was excited to see what the airline would have to offer. At the time, I expected that New York would likely be the first U.S. destination, so Los Angeles comes as a bit of a surprise but no less of an exciting one. British Airways sent us this video to give folks a feel for what passengers could expect from the double-decker superjumbo - check it out:

"This will be a very special premiere," said Keith Williams, British Airways’ chief executive. "The A380 is a great aircraft that has been developed with huge amounts of British engineering ingenuity. London and Los Angeles are two world-leading cities, and we are proud to be the first airline to connect them with the A380."

A couple of additional things to note:

Just out of curiosity, I looked on AA.com to see if you could book award tickets on the new aircraft already and found tons of availability in economy, business and first class on various dates in November including this itinerary for the outbound on Monday, November 4 and returning on Wednesday, November 13 in business class aboard the A380 for 100,000 miles and $1,226 in taxes and fees (sheesh!):

The award ticket includes British Airways' typically hefty taxes and fuel surcharges for flying in and out of London, but it's still about $2,500 cheaper than buying it outright via AA.com:

If you're interested in booking an award ticket on the new route for yourself, you have several options. Though the 100,000-Avios bonus on the British Airways Visa is gone for now, the card still currently comes with a sign-up bonus of 50,000 Avios when you spend $1,000 in the first three months - enough for a one-way business class award.

If you got in on either the current limited-time 75,000-point offer on the Amex Business Gold Rewards card or the 50,000-point sign-up bonus on the Amex Premier Rewards cards, you could consider waiting until there's a British Airways transfer bonus on Membership Rewards points so that you can get to London using even fewer Avios than usual (you would need 50,000 for economy and 100,000 for business class). Fingers crossed there's another 50% transfer bonus in the near future, which would mean you would only need 67,000 Amex points to fly business class to London!

Another option, if you're thinking of applying for a round of credit cards at the moment, would be to get both the Ink Bold and Ink Plus from Chase since both accrue Ultimate Rewards points, which are a transfer partner of British Airways as well. Each comes with a 50,000-point sign-up bonus when you spend $5,000 within 3 months, so with those two cards alone you'd have enough points for a roundtrip business class award ticket.

I'm going to wait a while before booking my flight on the new aircraft, but do any of you have plans to fly it soon after it starts service? If so, be sure to share your experiences once you do!
[card card-name='Ink Plus® Business Credit Card' card-id='22129636' type='javascript' bullet-id='1']

Featured image by I would be flying BA's A380 - the only question was, would it be in business or first class?