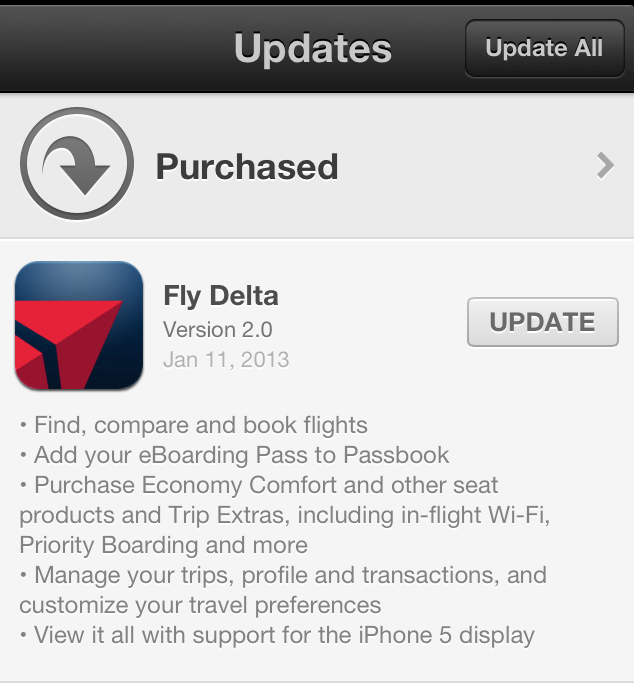 New Functionality Added to Delta App
This post contains references to products from one or more of our advertisers. We may receive compensation when you click on links to those products. Terms apply to the offers listed on this page. For an explanation of our Advertising Policy, visit this page.
Sign up for our daily newsletter

I'll be honest- when I heard that Delta was launching a new App today, I cringed because I still have not adjusted to their new and "improved" website. However, so far it seems like the app enhancements are actually net positives, though I haven't had enough time to test it out to make final judgement. I personally hate booking airfare on delta.com, because I think the new site is clunky and I often get errors, so maybe booking through the app will be a more seamless experience.

It incorporates several of the better functions of the new website such as "My Profile" and "My Wallet" so you can update your SkyMiles information and stored credit cards. This new version also uses Passbook where you can store your boarding passes all in one place, and it is compatible with the iPhone 5 display to utilize the full screen. Other new features in the app include the ability to purchase Economy Comfort and trip extras such as Gogo WiFi and priority boarding right within the app.

When Apple released iOS 6, they added Passbook, which is a place where you can store all your boarding passes, movie tickets, retail coupons and loyalty cards in one place. While I am an early adopter of some software, I haven't gotten too involved with Passbook, but the convenience is that your boarding passes appear on your lock screen at the appropriate time and place — like when you reach the airport and if your gate changes after you’ve checked in for your flight, Passbook will even alert you to make sure you’re not relaxing in the wrong terminal. However the previous version of Fly Delta did not support this feature, so it's nice to see Delta add that feature in now.

In addition to these new features, the app still does everything it did before so passengers can continue to check-in, get eBoarding passes, pay for bags and view or change seats as well as viewing their status on the Upgrade and Standby lists, which can be great for those airports without the GIDS (upgrade/standby list) screens. They can also receive push notifications of gate changes or flight updates. Passengers can track their checked bags by scanning the bag tag with an iPhone camera – so no more lost bags. Those whose travel plans change can also rebook cancelled or missed connecting flights on the fly while in-flight since it’s free to use this app onboard a GoGo-equipped plane. The app also comes loaded with airport information and Delta Sky Club locations.

What are your thoughts on the new app? Was I being too hard on the new Delta.com?