Most everyone reading this site likes to either save money while traveling or travel for “free”. However, any time I post about Spirit Airlines, seemingly one of the least expensive airlines out there, most of the comments range from “oh heck no” to “I’d freeze in Antarctica before I would ever consider getting on a Spirit flight”. In fairness, Spirit Airlines does come with some potentially high fees for various things, so if you aren’t careful it isn’t actually an inexpensive airline to fly, but their base fares often can’t be beat. Recently, I posted about a deal where you could fly from Houston to Vegas for around $70 roundtrip. This was a brand new market for Spirit, and they were selling very inexpensive tickets to celebrate. My parents love to travel, and they really love a good travel deal, so they bought tickets and we all hoped for the best.

Their trip is now complete, so I interviewed them about how it was flying on Spirit Airlines. I wanted to share their story not only with you all, but I have some Spirit miles I got for free by going to a Spirit event Houston, so it is likely I will be flying them myself in the coming months. Here’s what they had to say…

You have miles and points in many different programs that you could have used to go to Vegas. What made you decide to be brave enough to fly on the airline everyone seems to love to hate?

A couple months ago we got an email notifying us that some unbelievable fares were being offered in celebration of the new routes opening from Houston. One such round trip opportunity was Houston to Las Vegas. The quoted lowest possible fare was about $72.00 ROUND TRIP!We had no intention of booking a trip anywhere as we had had a marvelous twelve day trip this summer to California, and there is an upcoming trip to New York City to experience the Christmas/holiday season in the Big Apple. But come on, a $72.00 ROUNDTRIP to anywhere is worth investigating, much less to one of our favorite destinations, Las Vegas, Nevada.

How hard was it to book the “unbelievable” low price that was advertized? Was there availability?

The first dates we tried to book were no longer available, so we opted for our second choice. Knowing that time is critical on most online offerings that are too good to be true, my experienced and efficient two finger keyboard technique was put to a true test. The initial response for option two was that the sought after fares were no longer available for the selected dates. Our hopes were now dimming, but we read on… “BUT WE HAVE FOUND AN EVEN LOWER FARE FOR YOU.” What? Lower than $72.00 roundtrip? Yes, we now had in our grasp two $68.18 roundtrip flights Houston to Las Vegas. I must admit our pulse rates were elevated significantly as we fast and furiously filled in all the info required and quickly hit the BOOK THIS FLIGHT button. Button pushed, flight confirmed, laughter ensued.

Did you know that Spirit Airlines had a bad reputation when you booked, or did you learn that afterward?

We personally knew little to nothing about Spirit Airlines before booking our flights. After we booked we learned from their website that Spirit is a low fare, no frills airline, and that if you wanted anything past a ticket, it would cost you.

Since the point of the trip was to go to Vegas at a very minimal price, what did you do to not get hit over the head with a bunch of fees from Spirit?

Our normal carry on bags would cost 25.00 to $40.00 extra to bring on board.Now up to $100 if you don’t pay for your carry-on in advance! To maximize our savings, we decided we could get our travel necessities in small backpacks that easily fit under the seats since those bags are free. Our trip was for only seventy-two hours so we found the backpacks allowed plenty of room for our limited clothing choices. We saved extra on fees by printing our boarding passes at home, by not selecting the larger front seats, and by not pre–selecting our seat locations. We decided to go bare bones, cheap as possible and to let the chips fall where they may. 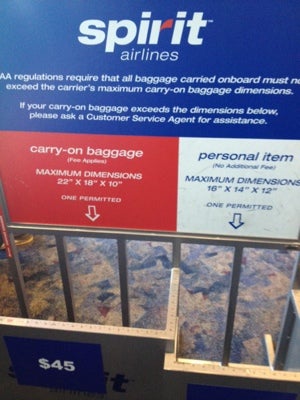 So did you successfully avoid all extra fees?

Yup.  It cost us a couple dollars to print our boarding passes for the return flight at the hotel, but it was much cheaper paying $5 each if we did it through Spirit at the airport.  You can see all of their “optional fees” here. 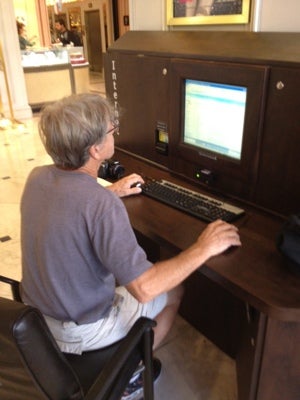 I have heard the seats are super tiny and uncomfortable, what was your experience?

On the outbound flight we ended up being assigned seats together in the back 1/4th of the plane with an aisle and a middle seat together. On our return flight we were assigned adjacent seats in the middle of the plane with a window and a middle seat. The rows of chairs in the aircraft seem to be slightly closer to each other than on other airlines, but we are not big people, so this presented no problem. 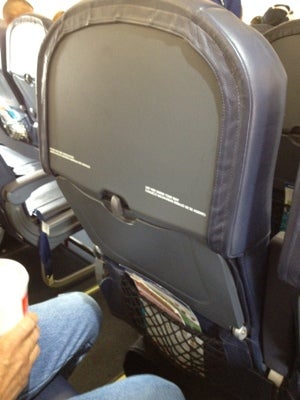 However, if you are taller, are traveling with a lap child, etc. I could see where it would be very tight (as shown in the photo of the man sitting across from us). 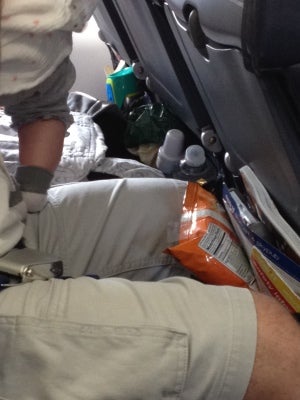 If you want to spend more money for a bigger seat, the “Big Front Seat” in the front actually looked very spacious.  Of course, then you are getting further away from the low price of the ticket itself, but it certainly does provide more legroom and a roomier seat.  The Spirit website says those seats range from an extra $12 – $199 dollars. 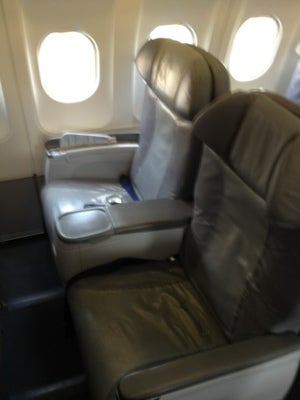 Spirit does not serve any complimentary food or drinks, but items can be purchased with a credit or debit card. No cash was accepted. Most passengers seemed to be prepared and brought meals, drinks and snacks on board. 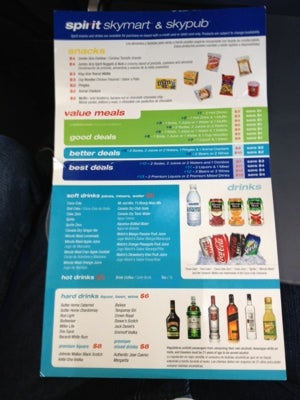 The aircraft was quite utilitarian. The seats were adequate but not plush. The ambiance and feel of the seating experience and flight was reminiscent of a two to three hour bus trip. Boarding and unloading was very efficient as very few bags were placed in the overhead bins. The planes pushed away from the gates a little early and landed early. Spirit is promoting itself hard right now, and you can expect a credit card solicitation during the flight itself.Once Spirit gets your e-mail address, you will get notified frequently of special deals and offerings. However, this can be a good thing as our flight would prove.

Did you do the rest of your Vegas trip on the cheap, or did you use your savings on the flight to splurge on other things?

In keeping with the budget first concept of this trip we were able to get a car rental from Advantage at a base rate of $13.31 a day for a Hyundai Santa Fe. We found a room at The Flamingo for about $45.00 a night. As the trip approached, both initial bookings for car rental and the room were booked and cancelled and re-booked as lower rates appeared.

Overall, our cheap little trip worked out great. The weather in Vegas in October is quite exceptional, the crowds were manageable and the rates affordable. We got a cheap shrimp cocktails at Golden Gate (used to be .99 cents, now $2.99), ate In-and-Out Burgers, hiked in Red Rock Canyon, and visited the Hoover Dam.  It was a great and inexpensive trip that wouldn’t have happened if we hadn’t been able to fly there and back for $72 each.  We would do it all over again without hesitation. 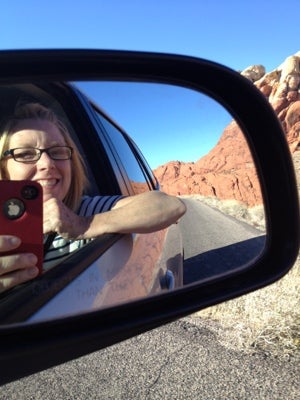 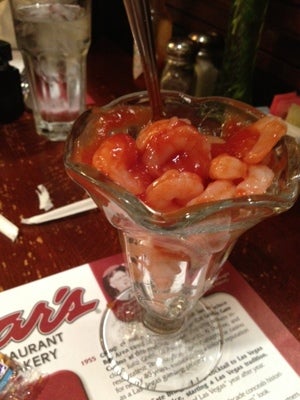 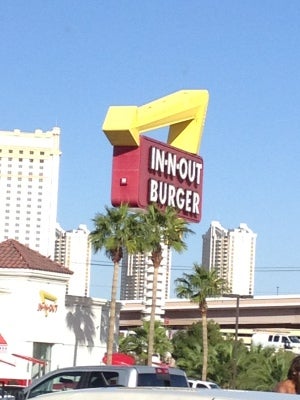 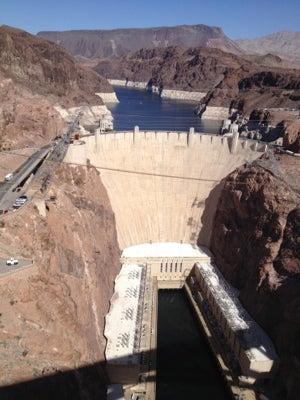 Our impression of flying Spirit for the first time is good. It was what we expected and a little more. We flew cheaply and efficiently, and we will undoubtedly use Spirit again.

Thanks to my parents for sharing their experiences!  I think comparing it to a bus trip makes a bunch of sense.  It will get you from Point A to Point B (baring any weather or other cancellations), but don’t expect much else.  I will add that even the notoriously stingy Spirit Airlines does allow a complimentary diaper bag for lap children (in addition to your normal carry-ons) as well as allowing you to check stroller and car seat without any additional fees.  My parents were literally surrounded by babies on their outbound flight, but they did not notice any children on their return flight.

Have you flown Spirit Airlines?  Was your trip a nightmare, or just fine like my parents’?

Summer Hull , aka Mommy Points, ran the Mommy Points site for families who want to travel more for less using miles and points for seven years. She now heads up a variety of special projects at TPG when she isn't exploring the world with her own two girls.
You might like
Elle Magazine to open hotels in Paris and Mexico
News
9h ago
Ooh la la: Air France shares details of its upcoming La Premiere first-class revamp
News
10h ago
California plans to add new state park in park desert area near Modesto
News
10h ago
Chase Sapphire Preferred® Card