Sunday Reader Question: Is It Worth It to Redeem for First Class Over Business Class On An Award to Paris? 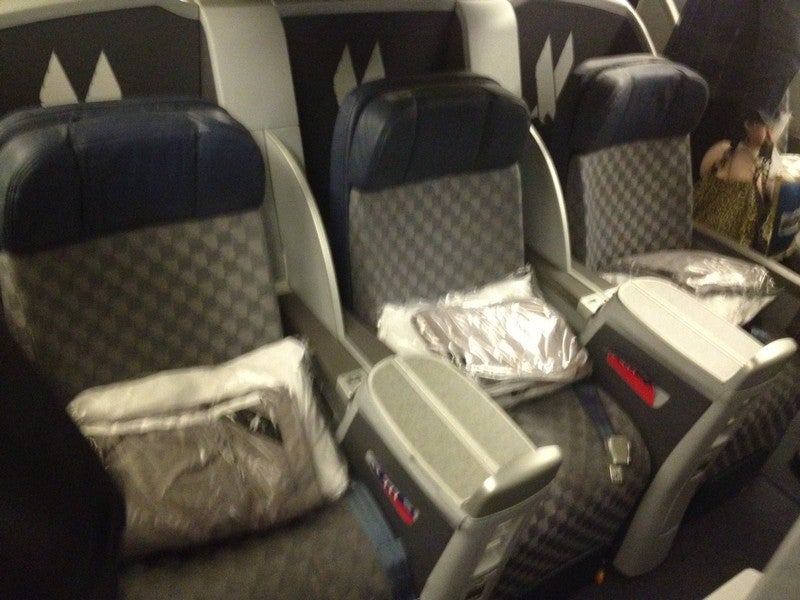 Sunday Reader Question: Is It Worth It to Redeem for First Class Over Business Class On An Award to Paris?
This post contains references to products from one or more of our advertisers. We may receive compensation when you click on links to those products. Terms apply to the offers listed on this page. For an explanation of our Advertising Policy, visit this page.

TPG reader Jacob is in a great situation - he's raked in a ton of American Airlines miles and wants to redeem them for a premium-class ticket to Europe. His question has to do with how to get the best value out of his hard-earned miles (and which airline to redeem them on) now that he's ready to use them:

"Over the last few months, I have accrued around 400,000 American Airlines miles through credit cards (personal, business), Fidelity promo, Netflix, etc. I am getting ready to book some flights for my wife and me to Europe for next year. My question is pretty basic: Would you actually redeem for first class seats on American to Europe? (We'd be flying Chicago O'Hare ORD to Paris Charles de Gaulle CGD.) When I look at first class rankings, it always seems like AA is at the bottom, or not even on the list. So just trying to decide if redeeming for business class for 50,000 miles is a 'better deal' than first class for 62,500 each way? I am new to the game (never flown anything but coach), so just want to make sure I am getting the most bang for my buck (points)."

First off, congrats on racking up valuable AA miles in such a short time! While accruing can be stressful, it's all worth it when you can redeem for flights - especially in business and first class when it's your first time in those cabins (note: you will get addicted to flying premium!).

When it comes to assessing which carrier to fly, for me, the luxury of flying non-stop generally outweighs connecting, even if I'm missing out on a "better" product. You could fly nicer business/first products on other Oneworld carriers like British Airways or Finnair, but it would require connecting within Europe and intra-European travel is not fun, even in "business" class (which is basically the same thing as coach on most carriers).

If you want to fly non-stop you don't have much of a choice here since the Chicago to Paris flight is operated by a 767 that is only equipped with coach and business, so you don't have the option of redeeming for first. American is upgrading their fleet to a better business class product, but that won't happen until 2014, so your seat will be their angled-lie flat, which I flew this year from Chicago to Beijing. In my experience, AA is very stingy with releasing saver business class inventory in advance on their Chicago to Europe routes (especially Paris), so if you want to go this route you should plan in advance and set ExpertFlyer award alerts so the second that AA releases inventory you can get an email alert.

As a 6'7" traveler, I personally find the AA business class seats uncomfortable because I feel like I'm sliding down and they aren't long enough for me to stretch out. Some people find them decent, but they are definitely outdated at this point. Service is generally perfunctory and the food and wine mediocre at best. All in all, it's just a so-so experience, but can be a great value for Executive Platinum members who can book the cheapest coach fares and used EVIP's to upgrade to business class (which is what I did when I went to Beijing). If this is your first time flying business class, it's not a bad product to start with, since most others you redeem down the line will be better. That being said, if you want this trip to be amazing, I'd evaluate three other options.

AA First Class
American primarily only offers first class service on flights to London and depending on when you go, usually only 2 of their 4 daily flights from Chicago to London are on 777s. You could then connect to Paris on British Airways in business class and it would only cost 62,500 miles and $86 one-way.

The service and food are similar to business class, but the seat is much longer and fully-lie flat. You also get pajamas and access to first class/ Flagship lounges, so I'd absolutely spend 12,500 more miles to book first instead of business class, but I wouldn't connect through London for the better experience.

British Airways Business
I personally love British Airways. This year I've flown their first class four times (3 times in new first and once in "old") and Club World once Miami to London. In my experience, the British Airways experience is better than American in every way that matters to me: lounges, cabin crew, food, seats, and amenity kits. Their Club World (business class) product is fully lie-flat, though they do cram 8 across on the 747 so it can seem cramped (definitely try to get the Upper Deck if you fly a 747- seat 62A is amazing - it faces backwards, but has endless legroom due to the exit).

British Airways First
I love British Airways' new first class. It's not as fancy as Cathay or Singapore, but the award availability is pretty amazing and the whole experience is nice. The seats are fully lie-flat beds and are well appointed, with large swivel TVs, small coat lockers and electric mood-lit window shades. The fuel surcharges/taxes are the same as business class, so whenever I redeem miles on British Airways, I almost always go with first, since the experience is much nicer. First class passengers also get access to the Concorde Room lounges, which is at Heathrow's T5 and is pretty swanky, with cabanas and an Elemis Spa.

Before you over-analyze your options, I'd recommend checking availability, because you may find that business class award space is much more scarce than first. And if you do end up redeeming for First and can swing the extra cash to fly British Airways, try it at least one-way, I doubt you'll be disappointed!
[card card-name='The Business Platinum Card® from American Express OPEN' card-id='22034405' type='javascript' bullet-id='1']