From Montreal to Upstate New York!

After a few days in Montreal (Post 1 and Post 2), we headed by car to a big house that my husband’s family had rented on the western shore of Lake Champlain right outside of Plattsburgh, NY. What was fantastic was getting several days together with family. What was terrifying was getting several days together with family. We weren’t quite sure how several days of non-stop extended family excitement would go, but we did know that the house we were heading toward was absolutely beautiful.

This was not a trip that was focused on earning points in a hotel chain. We wanted Little C to play with her (only) two cousins from morning until night, and a big house that we found on Vacation Rental By Owner was the best way to do that. My husband’s family graciously picked up the tab to the house this time, so the “kids” were just responsible for buying and cooking food, as well as paying for the boat rental. It was insanely generous of them to do that – we’ll have to be sure to keep flying them down to visit us on miles from now until eternity! I really think that being in a nice roomy spot (especially when kids are involved and you are in the house a bunch) helps with the overall mood and feel of the trip. That may or may not be a bit “snobby”, but I have found it to be true for my travels.

The house is dubbed “Lost Lodge” and it is fantastic. The backdoor is just 300 feet from Lake Champlain, and it has a nice backyard for the kids to play in. It is also located off of a dead-end street, so there isn’t a bunch of traffic driving by the front of the house. The house has two levels, two living rooms, two kitchens, four bedroom/bathroom suites, and is just beautiful. It kinda made me want my own airplane hanging in the living room! 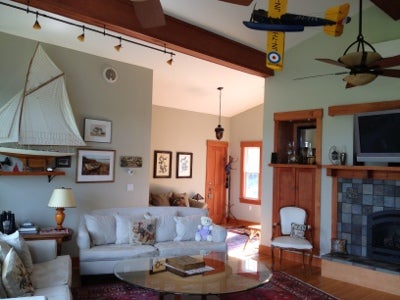 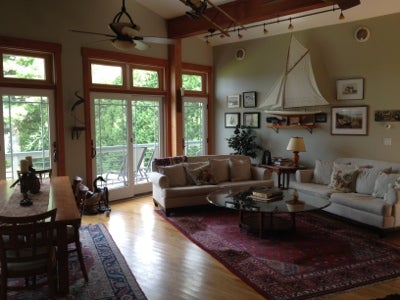 We didn’t really use the downstairs kitchen other than to store drinks in the fridge, but we took turns cooking most of the main meals in the upstairs kitchen. There was plenty of room to prepare and serve meals for a very large crew of people. In addition to the 7 adults and 3 kids who stayed at the house, we had guests at some other meals as well. Just a tip if you are traveling with a large group like this – if you don’t help with the meal preparation, be ready to help with the clean-up! Also, use paper plates when possible to cut down on some of the (never ending) clean-up.  Names on cups is also a good idea s they get confused easily. 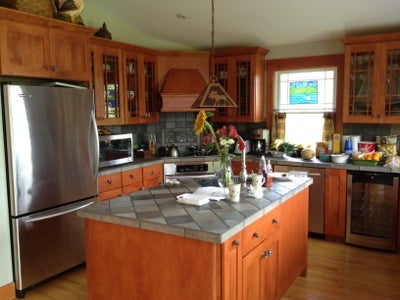 I loved that each bedroom had its own attached bathroom – that really helps with giving everyone their own space for sleeping and “downtime”. There were two bedrooms downstairs and two upstairs. In case you every stay here (or somewhere similar), be aware that listening to bunches of people walking around and playing upstairs can be quite loud when you are trying to put a little one down for a nap downstairs. The bedrooms were all queen beds other than one bedroom that had two twins. The one with twins was also the only one with a bathtub.  What was amazing about this house was how much it immediately felt like home.  I think that is in large part to the way it is designed and decorated. 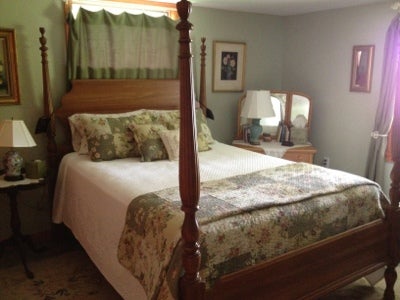 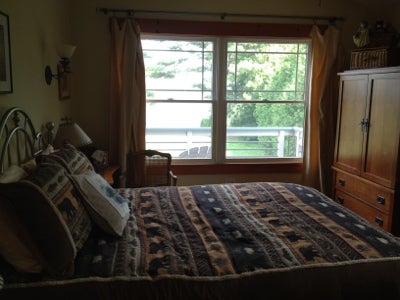 When not resting or playing in the house, there was an amazing outdoors to enjoy. The weather was absolutely perfect in the 70’s and maybe low 80’s. A far cry from the 100+ temperatures that were in Texas that week! It was so great watching kids just be kids. No one had a Nintendo DS, iPad, etc. I think only two cartoons were even watched the whole time we were there. Instead, the kids read books, colored, played hide and go seek, played chase, swam, made s’mores, and did whatever else you do when you are 2, 6, or 8 years old. 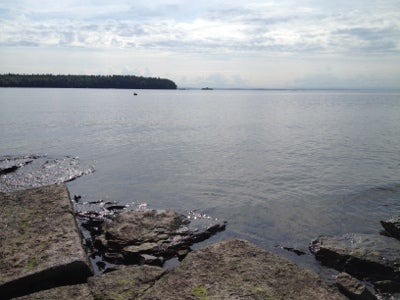 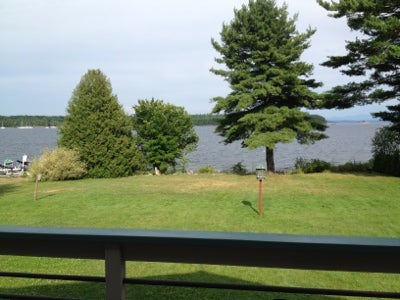 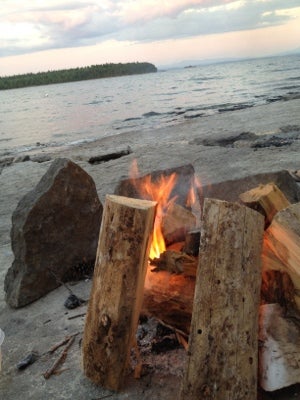 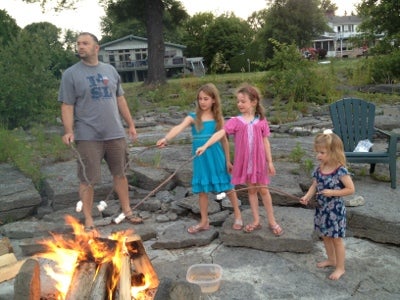 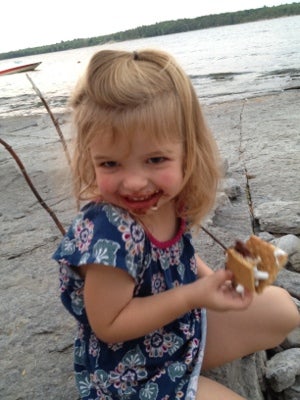 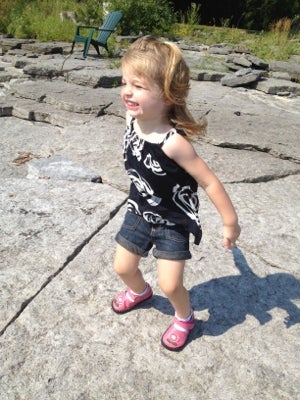 There are tons of family friendly activities in this part of the country. In the summer the weather just begs for families to get outside and be active, and that is exactly what we did. One day many of us went to Ausable Chasm for hiking, sight seeing, and floating. Little C stayed home, but the 6 and 8 year old had no problem keeping up. I would think that kids close to age 4 and up would have no problem with the hike that we did. There was about an hour of walking/climbing followed by about a 30 minute float down the river (you can do it in a tube or a raft). The Ausable Chasm has tons of other activities as well such as: mountain biking, disc golf, mining, repelling, and more. As our daughter gets bigger, I can certainly see us returning to Ausable Chasm for all sorts of outdoor activities. 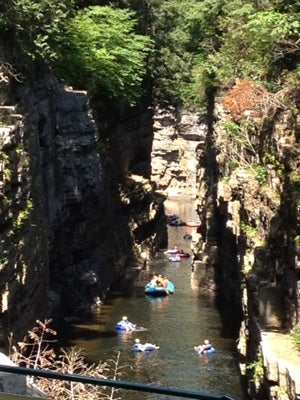 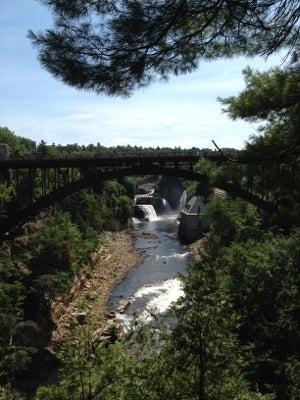 We also rented a pontoon boat for the day so that the whole family could have fun out on Lake Champlain.  Our reservation was made more than six months out for a bowrider, but the location that rented to us was unable to fulfill the reservation.  We settled on the pontoon as a last resort.  That was an idea that was good in theory, and was good in the end, but was horrific getting started.  As you may or may not know, Lake Champlain can get quite rough, and the day that we got the boat was no exception (see the video below just to give you an idea).

We had the great idea of driving the boat to the water outside the house to pick everyone up.  However, there was no way to get the kids and gear through the choppy water to the boat.  So, instead we asked to use a neighbor’s dock a couple houses down.  However, the water there was even rougher, and it took five adults in the water to save the boat from crashing into the shore due to the very rough waters.  It was sort of horrible.  However, we did succeed in saving the boat (thanks in large part to an 81-year-old native of the area who saw the mis-adventure unfolding), and once we went to a much calmer public dock, everyone was able to board safely. For the record, my husband has been an avid boater for decades, and had reservations about the dock based on the wind direction and lack of a leeward berth, but he went with the flow, so to speak.  Oh Captain, my Captain.

The whole family had a blast tubing and riding on the boat.  It was some money very well spent for the half-day rental.  A few of us could have been spared from mild heart attacks if we had just gone to the calm public dock from the beginning.  Sorry there are no photos from that day – my nerves were way too shot to remember to take pictures.

I’m not going to paint an overly “Leave it to Beaver” picture of traveling with extended family.  It has its pros and cons to be sure.  Regardless of how nice everyone is, putting a large number of different personalities in one space for many days can be a challenge.  However, it can also be absolutely worth it.  It was priceless seeing my daughter bond with her cousins who live thousands of miles away.  That is what family travel is all about. 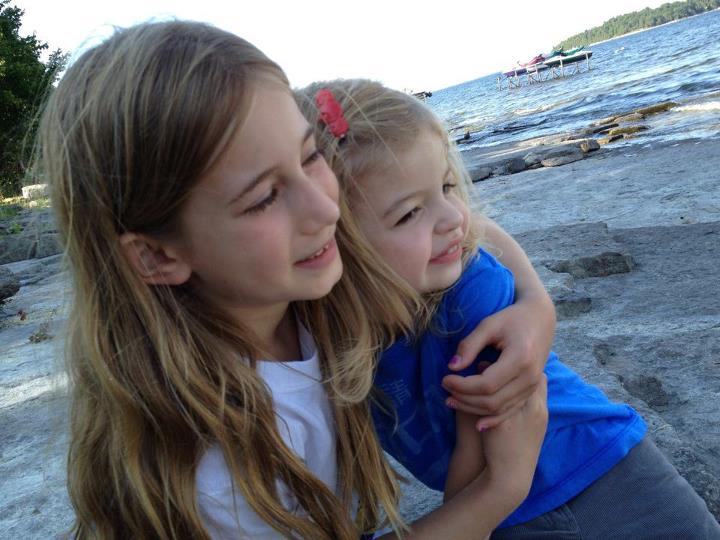 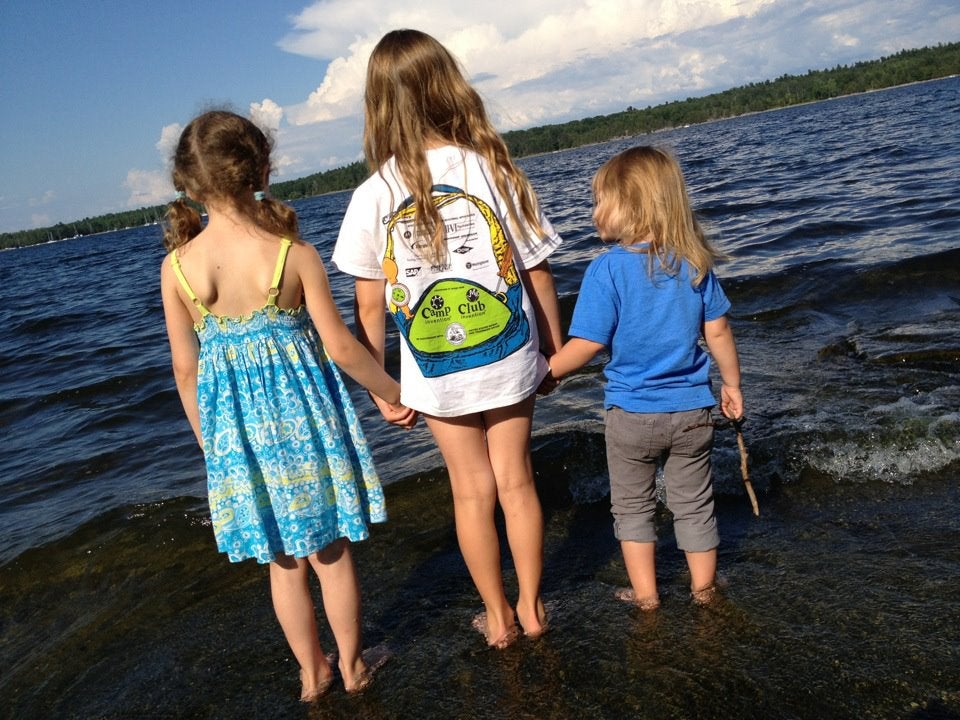 Summer Hull aka Mommy Points, ran the Mommy Points site for families who want to travel more for less using miles and points for seven years and now heads up TPG Family when she isn't exploring the world with her own two girls.
You might like
The US reopens to international travelers on November 8 — what you need to know
News
Yesterday
I just got a tattoo on a cruise ship — here’s why you should, too
News
Yesterday
How this perk works: The Chase Sapphire Preferred 10% anniversary points bonus
News
Yesterday
Delta SkyMiles® Platinum American Express Card