Yes, Boarding Early Matters (to me) & How to Get It

For the last few weeks I have been paying close attention to my United flights since they have officially stopped allowing families with young children to board early. I posted about this development here, and not surprisingly there are those on both sides of the aisle regarding this debate.  In particular, my friend, Seth (Wandering Aramean), and I have gone back and forth a bit on Twitter, Milepoint, etc. about this issue.

He asserted that no longer allowing families with young children to board early wasn’t a big deal since it was already supposed to come after elites had boarded the plane anyway, so it wasn’t really helpful to begin with.  My opinion is that boarding after a few elites who are mostly situated in first class or the front of economy is much better than boarding with your young kid and their gear along with a herd of other people who are sitting at the back of the plane.  While my instinct was that boarding right after elites was still pretty helpful for families with young children, I decided to pay very close attention on my multiple United flights over the past few weeks.

I don’t currently have status with United, so I board with Group 4 after the elites and first class because I have the MileagePlus Explorer card.  Having the United MileagePlus Explorer card allows you to board with Group 4. I fly into and out of Houston Intercontinental Airport on almost all of my flights, and IAH is a good sized United hub.  This makes it fairly likely that there will be decent numbers of elites, and people with the co-branded credit card.  My flights in the last couple weeks were to and from Reagan National Airport and LaGuardia, and most were either completely full or mostly full flights.  Of course, this is not a scientific study (though that would be super cool), but I did my best to document my experiences of boarding with Group 4 – which is roughly when United would have boarded families with small children.

What I found was that boarding at this point in the boarding process makes a huge difference.  Here are a few shots of these flights and what the boarding process looked like when boarding with Group 4.  Just a few minutes later, the aisle would be clogged, and people would be seated in their seats – thus meaning you might have to climb over them with your kiddo and their gear.  In my opinion, if you are trying get on with young kids and a car seat this can be a real issue. 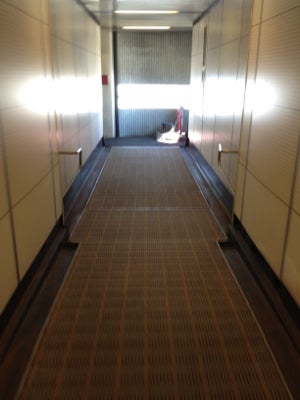 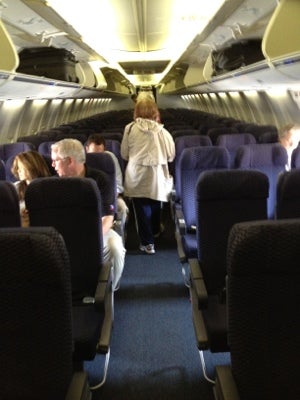 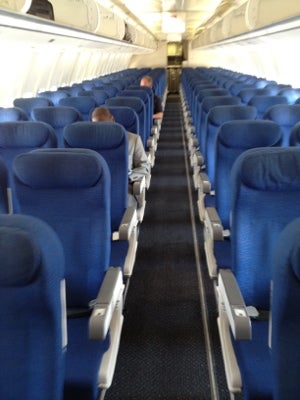 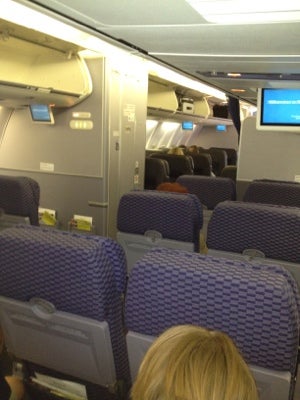 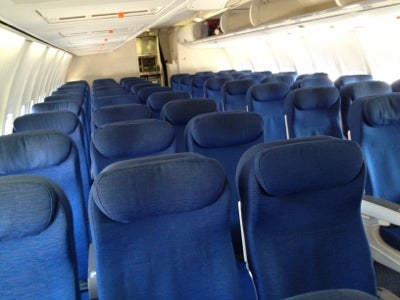 As you can see, there are some people already on the flights, but the planes are still mostly empty – especially toward the back of the plane.  The aisle is also not yet clogged at this point in the boarding process, or at least it wasn’t on all of my recent flights.  However, just a couple minutes after Group 4 boarding, the aisle does completely clog with the subsequent boarding groups.  In my opinion, boarding with a young child when the plane looks like the above photos is much easier than when the line is clogged and many of the seats are full as is demonstrated in the photo below. 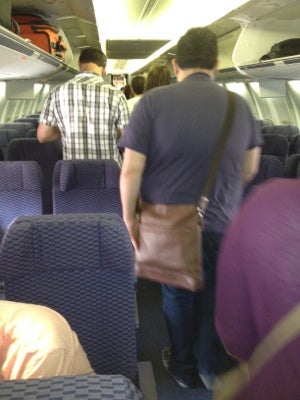 In fairness, on several of these flights I saw the gate agent go over to families and see if they wanted to board early.  Of course, this will vary from gate agent to gate agent and is certainly not a guaranteed occurrence.  Many young families would accept the early boarding offer, but I did see one family turn down the opportunity, and I think they are actually onto the best strategy.  What that family did was have the elite dad board early with the car seat and bags, and the mom and toddler boarded toward the end of the boarding process to limit the time the toddler had on board.  The dad was able to get on early and get everything set-up, and once the mom and toddler came on boarding, everything was already ready to go.  Clearly this only works if you are traveling with a partner, but it is a great strategy if aren’t traveling alone with your kiddo.

So what can you do if you aren’t an elite?  How can you board early without relying on the kindness of the gate agent to “bend the rules”?  Of course, you don’t have to have a young kid to want to board early and secure a spot for your carry-on luggage, so let’s look at a few different airlines and see what it takes to board early without having status, or booking a first class ticket.

The United MileagePlus Explorer card will get you into boarding group 4 (of 7) and the United Club Card will get you into boarding group 3 (or so I’m told – I don’t yet have that card).  The United MileagePlus Explorer card is fee-free the first year and then is $95 per year.  The Club card is $395 per year with a $95 statement credit the first year.  Clearly you would only select the Club card over the Explorer card if you want United Club access, but you should also be aware that only the more expensive card comes with priority security screening.  Which is something I really wished I had the other day when I encountered this massive security line at IAH.  You can’t totally tell from the photo, but the roped waiting line for security ended right where that man on the left was standing, and then the line continued to go all the way down the hall and eventually around the corner.  It took quite a long time to get through the line.

If you are interested in the Explorer card, you can read this thread to make sure you are getting the best sign-up offer. 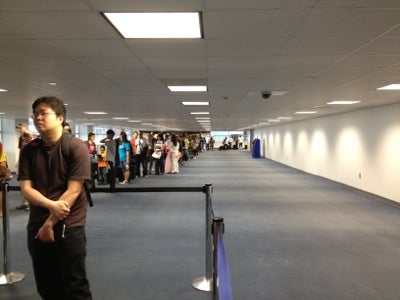 As of a couple months ago, the American Airlines Citi AAdvantage credit card now comes with priority boarding.  This is only valid for tickets booked after April 2, 2012, and is valid for up to four people on the reservation.  You can also purchase “Your Choice” priority boarding at airport check-in kiosks that will allow you to access Zone 1 boarding for that particular flight. Go here for info on the best un-official Citi AAdvantage card offer.

The Barclays US Airways MasterCard comes with Zone 2 boarding.  You can also pay per person for PreferredAccess during the check-in process starting at $10 per person, and this will secure you priority check-in, priority screening, priority boarding.

Southwest does allow for families to board after the A group (the first 60 boarding positions), but you can also purchase Early Bird Check-in that will have a boarding pass reserved for you 36 hours before check-in.  That will ensure that you are one of the first on the plane.  They charge $10 per one-way ticket for this service. Southwest is unique since you don’t have assigned seats ahead of time, so when you get on the plane determines which seats you can choose from.

The Delta Gold, Platinum, and Reserve credit cards all provide early boarding for up to eight people on the reservation.  There seem to be several different Delta credit card offers available, so I recommend comparing offers here, here, and here to see what works best for you.  Delta also offers “Trip Extras” and one extra you can purchase is early boarding.  However, this option is only available at a specific number of airports.

This is not an exhaustive list, but it does give some examples of how you can access early boarding without having elite status or relying on the airline to allow you to board early with your child out of the goodness of their hearts.  Do you have other tips or ways to board early? Does boarding early make a difference to your young family, or does it work just as well for you to boarding in the middle or at the end of the boarding process?  I think this is one topic where my fellow BoardingArea blogger and I will have to agree to disagree. ;)

Disclaimer: I do receive commission if you are approved using one of my links.  As always, your support is greatly appreciated.

Summer Hull aka Mommy Points, ran the Mommy Points site for families who want to travel more for less using miles and points for seven years and now heads up TPG Family when she isn't exploring the world with her own two girls.
You might like
Fabulous property but dated rooms; The Kauai Marriott that will soon be a Sonesta
Reviews
8h ago
Prepare for take-off: Mapping out a rewards card plan for families in 2021
News
8h ago
With cruising to Alaska in flux, Holland America and Princess turn to selling land tours
News
10h ago

Top offers from our partners
How we chose
✕
How we chose these cards
Our points-obsessed staff uses a plethora of credit cards on a daily basis. If anyone on our team wouldn't recommend an offer to a friend or family member, we wouldn't recommend it on The Points Guy either. Our opinions are our own, and have not been reviewed, approved, or endorsed by our advertising partners.
New Welcome Offer
Learn More Terms Apply
New Welcome Offer
The Platinum Card® from American Express
Earn 75,000 points
60,000 Points