Destinations of the Week: The Best Cities for July 4th Fireworks 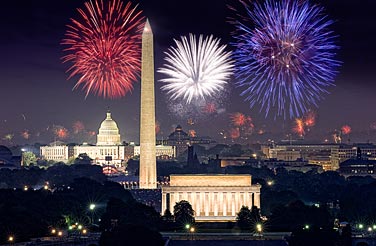 Destinations of the Week: The Best Cities for July 4th Fireworks
This post contains references to products from one or more of our advertisers. We may receive compensation when you click on links to those products. Terms apply to the offers listed on this page. For an explanation of our Advertising Policy, visit this page.

We’re going to switch things up a bit with today’s Destination of the Week, and instead of giving you a rundown of a single destination for mileage runs and points-specific hotels, we’re setting our sights on that most American of holidays, July 4, to fill you in on where some of the best fireworks shows in the country will take place to commemorate the 236th anniversary of America’s founding.

Boston
With a nickname like “The Cradle of Liberty,” you know Boston hosts one of the nation’s best fireworks displays on the 4th of July—with around half a million spectators annually—as it’s been doing for nearly 40 years now. The pyrotechnics are launched from huge barges in the Charles River, and the display lasts a good 20 minutes, so prepare to ooh and aah for quite a while.

Making the show even better is the Boston Pops, which plays a rousing program every year at the Hatch Shell along the Charles River Esplanade. Concertgoers must be inside the Oval audience area no later than 6:00pm, though the concert begins with the national anthem and a flyover at 8:20pm. The showstopper is the playing of the “1812 Overture” at 9:30pm, complete with howitzers and cannon. The fireworks display launches at 10:35pm this year and lasts until 11:00pm.

Though the concert is the highlight, many audience members actually have obstructed views of the fireworks themselves, so if the lights display is important to you, consider just taking a picnic blanket and some provisions to the banks of the river, or finding a new friend with a boat who’s going out on the water and watching them from there. Especially because you’ll still hear the entire musical score from huge loudspeakers set up around the area.

Nashville
The Music City’s 4th of July show is called “Let Freedom Sing,” and singing there will be from the likes of The Mavericks, Craig Morgan, Sarah Darling and other artists, with the culmination being a 30-minute concert by the Nashville Symphony accompanying a fireworks show above the Lawn at Riverfront Park.

Folks come early to stake out prime spots, so the celebration begins at noon with live music, while the official concert kicks off at 6:45pm, and the fireworks and Symphony concert will begin at 9:30pm. The event is expected to draw over 100,000 visitors.

Rooms on high floors of the Renaissance Nashville should have river views framing the fireworks. Rates start at $209 a night or 30,000 Marriott Rewards points. The Hermitage Hotel is the city's grande dame luxury property and is within walking distance of the festivities. It's also a member of Amex's Fine Hotels & Resorts, so American Express Platinum Card members are eligible for a room upgrade, early noon check-in, inclusive continental breakfast, 4pm late check out and a $100 food and beverage credit per stay.

New York City
You might associate Macy’s with Thanksgiving, but the department store also puts on one of the country’s most impressive fireworks displays in New York City on Independence Day. It started back in 1976 for the Bicentennial and has been growing every year since. Supposedly it incorporates as many as three times more fireworks (40,000 in total this year) as any other display in the country – why you always gotta one-up everyone NYC?

Though in the past the fireworks usually exploded over the East River, this year the show remains over the Hudson between 18th and 48th streets. This year’s show is entitled “Ignite the Night,” and will be 25 minutes long, featuring celebrity performances by Katy Perry and Kenny Chesney.

Most folks go to the Westside Highway to view the show, and there will be access points at various intervals along it from 24th street to 57th street. The broadcast on NBC will start live at 9pm EDT, so the fireworks show itself should start within about a half-hour of that, though the Macy’s site doesn’t specify an exact start time for the fireworks.

For the best views, you could actually consider going to New Jersey, though, since you’ll have the skyline of Manhattan in the background. Waterfront Park in Weehawken, Maxwell Park in Hoboken and Exchange Place in Jersey City are probably your best bets.

The Hyatt Regency Jersey City has fantastic river views and should be a great spot to watch the show. Rates there are $284 a night in July, or 15,000 Gold Passport points. You could also use one of your two free nights as a new Hyatt Visa cardholder, or if you've already had it a year, this hotel would be eligible for your free night since it's a Category 4 property. In Weehawken, your best bet is the Sheraton right on the water, where rooms $199 a night or 12,000 Starpoints.

If you're looking for a hotel with great views in the city, your best bets are the Mandarin Oriental or the Trump Soho, both of which are part of Amex's Fine Hotels & Resorts. American Express Platinum Card members are eligible for a room upgrade, early noon check-in, inclusive continental breakfast, 4pm late check out and a $100 food and beverage credit per stay.

Philadelphia
Why not celebrate July 4th at the site of the original Independence Day 236 years ago? Though you can honor the nation’s founding on the steps of Independence Hall from 10:00 – 11:00am with the “Celebration of Freedom” program of music, speeches and readings of excerpts from the Declaration of Independence, the real fun begins over on the Benjamin Franklin Parkway at 7:00pm for the start of the Concerts & Fireworks show. This year, The Roots will be playing alongside other special guests including Queen Latifah, Daryl Hall and Joe Jonas for all you teenyboppers.

The fireworks will be set off over the Philadelphia Museum of Art, so if you do go to the festivities, make sure you’re positioned with a good view of the building to catch the best of the show. Prime viewing will be on the parkway between 20th street and Eakins Oval. More information on the host of “Welcome America” events from June 25-July 4 can be found here.

The Four Seasons near Logan Square is supposed to have fabulous fireworks views up and down the Parkway and is a member of Amex's Fine Hotels & Resorts where American Express Platinum Card cardholders are eligible for a room upgrade, early noon check-in, inclusive continental breakfast, 4pm late check out and a $100 food and beverage credit per stay. The Hyatt Regency Penn's Landing is supposed to be a good, more affordable choice where rooms are starting at $159 a night or 12,000 points.

San Francisco
The West Coast doesn’t have too many over-the-top fireworks displays (blame it on urban sprawl), but San Fran outdoes itself every year with a huge show over the Bay starting at 9:30pm that attracts over half a million viewers each year. The show usually lasts a good 20 minutes and is launched off the Municipal Pier and barges near Pier 39.

The festivities begin with the Air Force Band playing at 2:00pm. There’s dancing at 6:00pm and then at 9:30, the fireworks begin followed by a huge party with DJ Scotty Fox at Pier 39. Other great spots for viewing the show are Fisherman’s Wharf and Aquatic Park at Jefferson and Hyde Streets.

If you've just gotten the new Fairmont Visa, you can spend one of your free nights watching the fireworks from the Fairmont Heritage Place Ghirardelli Square. The iconic Top of the Mark bar at the Intercontinental Mark Hopkins at the top of Nob Hill is another spot with unparalleled views where a room will run you $243 a night or 40,000 Priority Club points. The Marriott Fisherman's Wharf has rooms for $219 a night or 35,000 points and is right in the heart of the action, as is the Sheraton Fisherman's Wharf, with rooms for $169 a night or 12,000 Starpoints.

Washington, D.C.
There’s something truly special about spending the 4th of July in the nation’s capital. Washington, D.C., was designed to impress both citizens and foreigners alike, and the Independence Day fireworks display and concert here shows the city off to spectacular effect as fireworks light up the sky above the National Mall and its monuments. It draws one of the country’s biggest audiences every year—so plan to get there early and find a prime spot in the middle of the Mall. Gates open at 3:00pm. The fireworks are launched so that they explode above (well, they look like they’re above, but really they’re over the river behind) the Lincoln Memorial, so be sure you have a view of that monument.

The soundtrack, called “A Capitol Fourth,” is a 90-minute concert starting at 8:00pm and provided by the National Symphony Orchestra live from the West Lawn of the Capitol and capped off with the “1812 Overture” with live cannon fire provided by the US Army Presidential Salute Battery.

This year’s concert will be hosted by Tom Bergeron and also feature appearances by Matthew Broderick, Kelli O’Hara, Kook & the Gang, and Apolo Anton Ohno, along with John Williams conducting his “Olympic Fanfare.”

If the crowds are too much for you, consider watching the display from the Potomac River aboard a tourism or dinner cruise. Another spot recommended by the Washington tourism office is the POV Lounge at the W Hotel, which has a picture-perfect view of the National Mall and the White House, and will be hosting a “Boom with a View” party that night. If you want to stay overnight, rooms will be running $289 on July 4, or 12,000 Starpoints.

If you’re up for a full day of events, you can also catch the National Independence Day Parade starting at 11:45am at Constitution Avenue and 7th Street NW.

Related stories
20 must-have cruise items — including a roll of duct tape
Chase Sapphire Preferred vs. Chase Sapphire Reserve insurance benefits – Which is better?
The complete guide to the Expedia Rewards loyalty program
Not as simple as it seems: How to use JetBlue Travel Bank
Featured image by The fireworks above the nation's capital show its monuments off spectacularly. Photo courtesy of A Capitol Fourth.