…..and what a 48 hours it was!  My mom and I just landed from a very eventful two days in Washington DC.  The primary purpose of the trip was business as I was lucky enough to be going to do some online video segments for the Travel Channel (more on that in a minute), but there was no way we weren’t going to work in some sightseeing as well.  Up until about a week ago I was going solo on the trip, but came to realize that I could actually use a little bit of help, and it would be really fun to have my mom as a companion.  Of course by that point tickets were selling for over $1000 dollars – also known as, “not gonna happen”.  However, there were award seats available at the 25,000 mile saver level with United.  I may or may not have enlisted the help of a 1K friend (top tier elite status) with United to avoid the last minute booking fee. (Thank you!)

Even if I had not been able to avoid the $75 last minute booking fee, being able to use 25,000 miles at the last minute for a ticket that otherwise would have been way too expensive to afford was fantastic.  My mom and I flew in to Reagan National airport and used Groundlink to get a car service out to Chevy Chase, Maryland.  It was awesome being able to stay above ground and see some of the sights as we headed through town.  I love using subway/metro type systems since it is often a very efficient and inexpensive way to travel, but there is something to be said about seeing a little bit of the city above the ground.  We went straight to the Travel Channel offices and got to ride in an elevator covered with a photo of Anthony Bourdain! 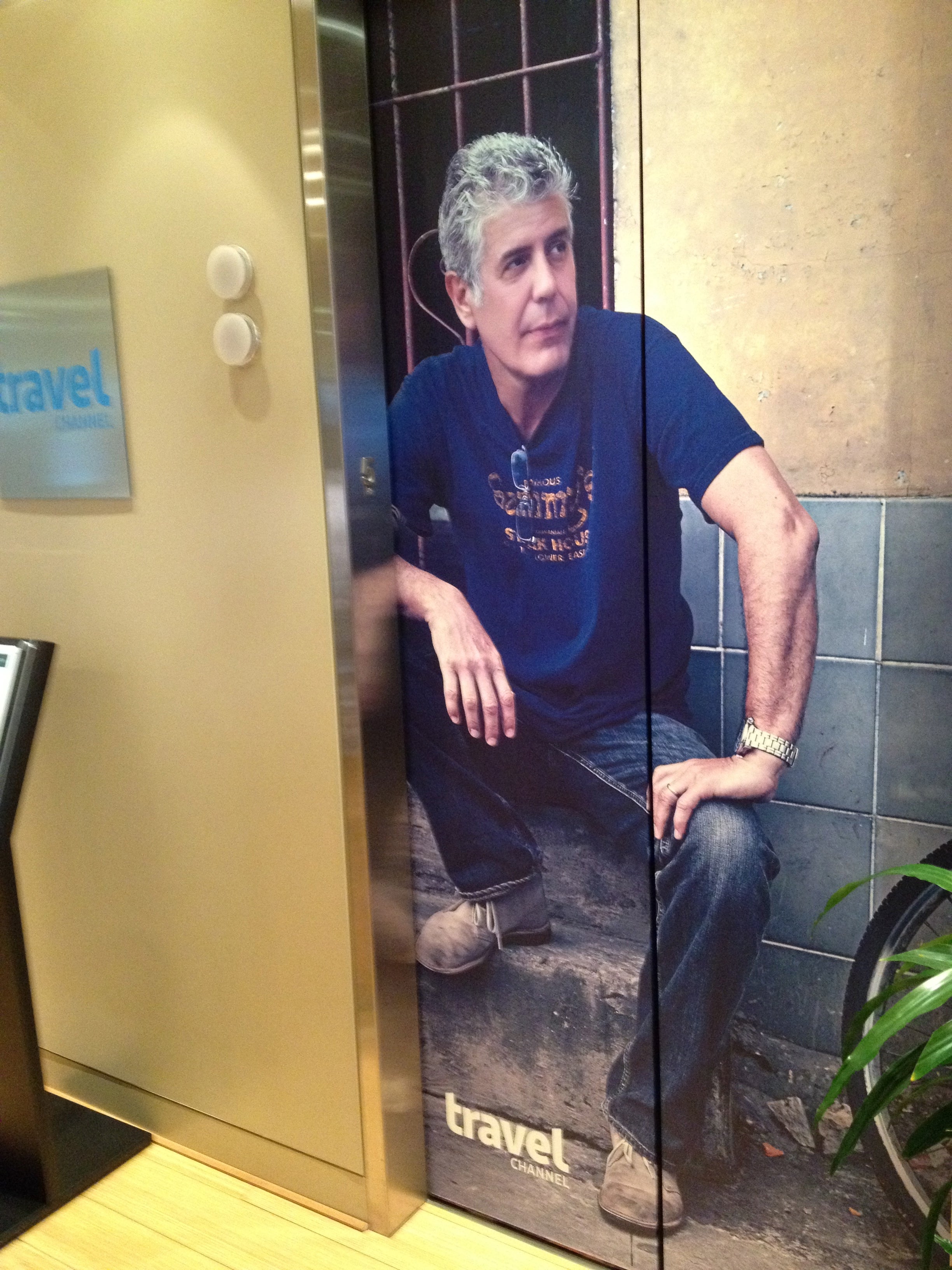 It was honestly a bit hard not laughing some while we waited in the waiting room as this is so not my life.  I mean, technically it is, but it really isn’t – my life is one comprised primarily of Cheerios, Dora the Explorer, and pony tails with yoga pants.  Hopefully that makes some sense to someone other than just me! ;) 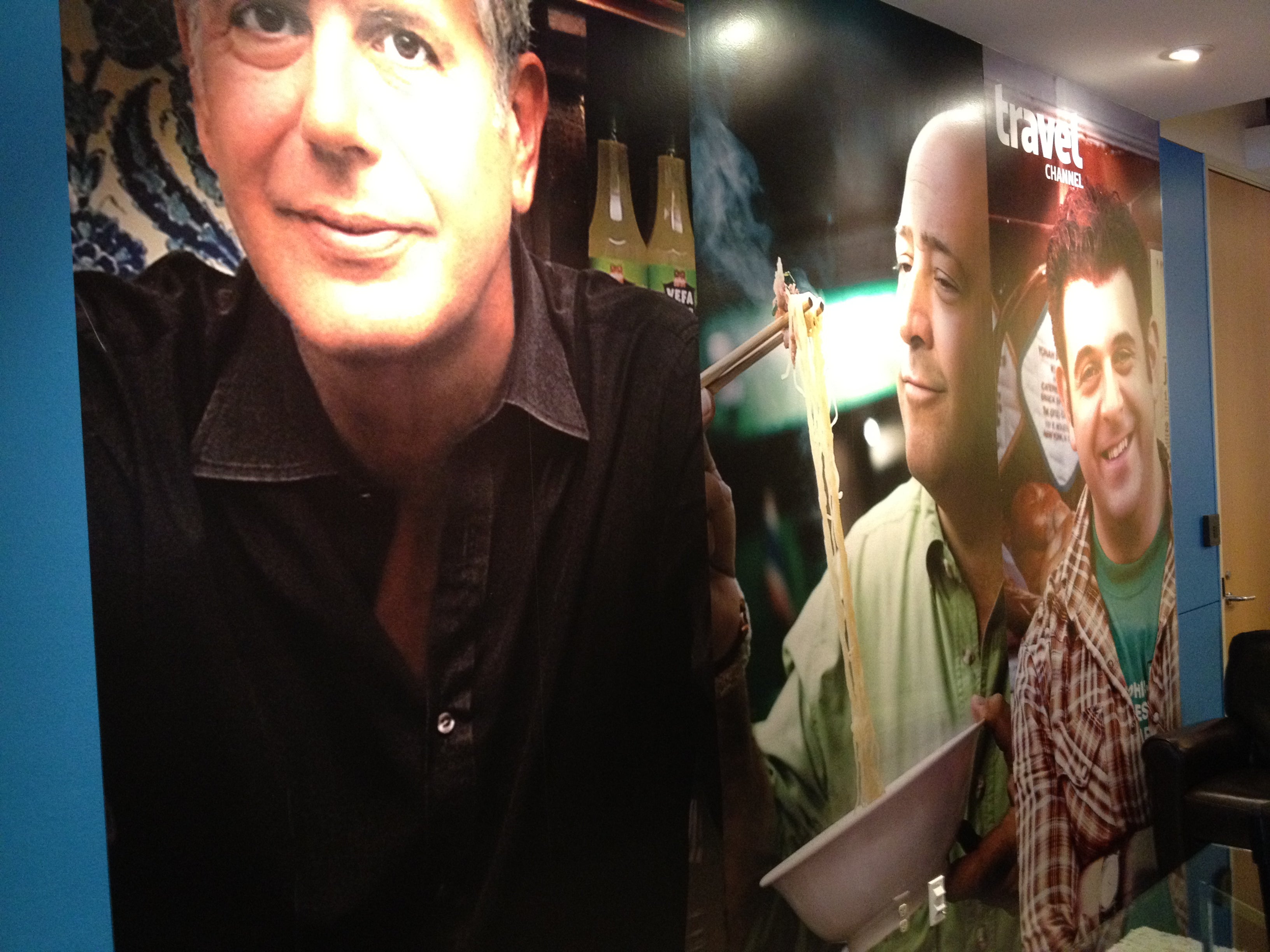 After our really fun meeting (basically we chatted about miles and points for 75% of the meeting – my kind of business meeting!), we headed to dinner with the Travel Channel folks I would be working with the next day (presumably so I would be at least slightly less freaked out), and then to our hotel in Washington DC.  This time we took the Metro and got out at Dupont Circle. 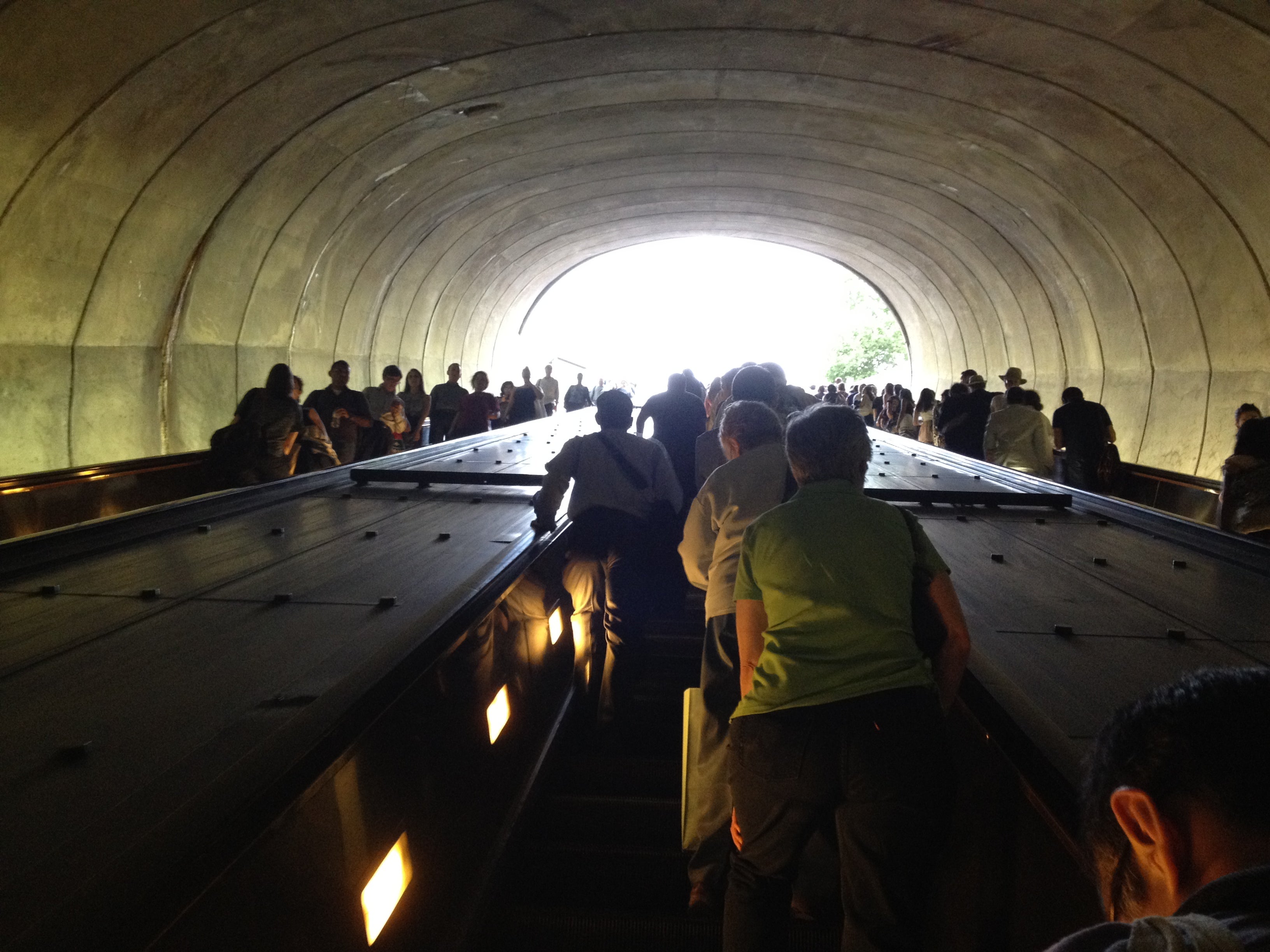 Turns out this wasn’t exactly the closest station to our hotel, but the eight blocks or so we walked gave us some good perspective about where we were in the city.  Though doing it with luggage and in light rain may or may not have been the best plan of all time.  The Travel Channel folks selected the Donovan Hotel for us to stay at as that is where we were filming the video blogs, but interestingly enough it is the same hotel that I stayed at on a family trip to DC over a decade earlier.  (As a side note, Travel Channel did pay for this stay.  That certainly did not influence my review of this Kimpton hotel, but wanted to put it out there just in case.) 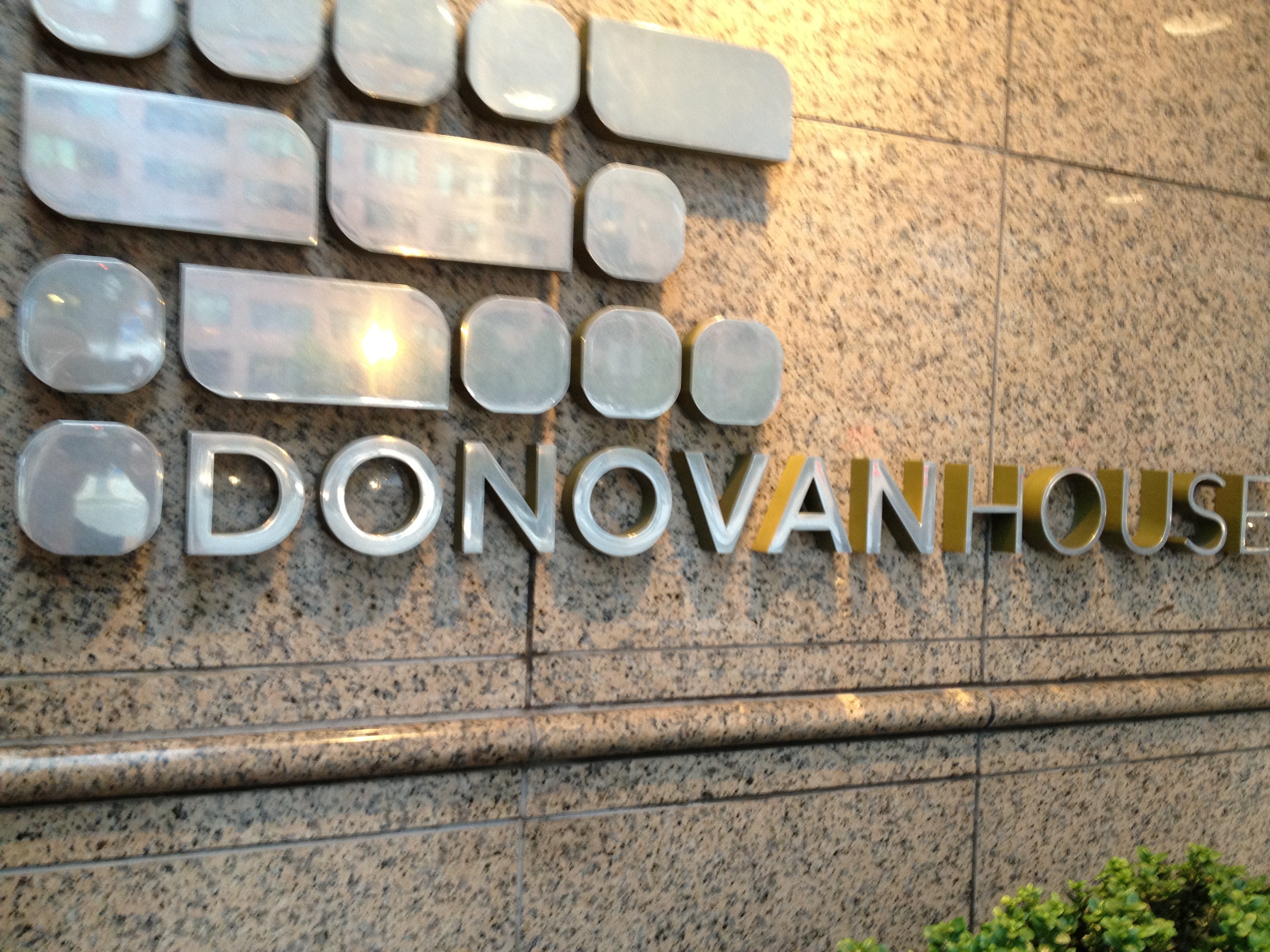 It had changed ownership and been renovated since then, but it was the exact same place.  What are the odds?  If my mom hadn’t been with me, there is no way I would have remembered that detail!  The hotel is located in Thomas Circle and just recently joined the Kimpton family of hotels.  I have always loved Kimpton Hotels as they are just fun and funky – however, I haven’t stayed at one of their hotels since I began traveling with a toddler. 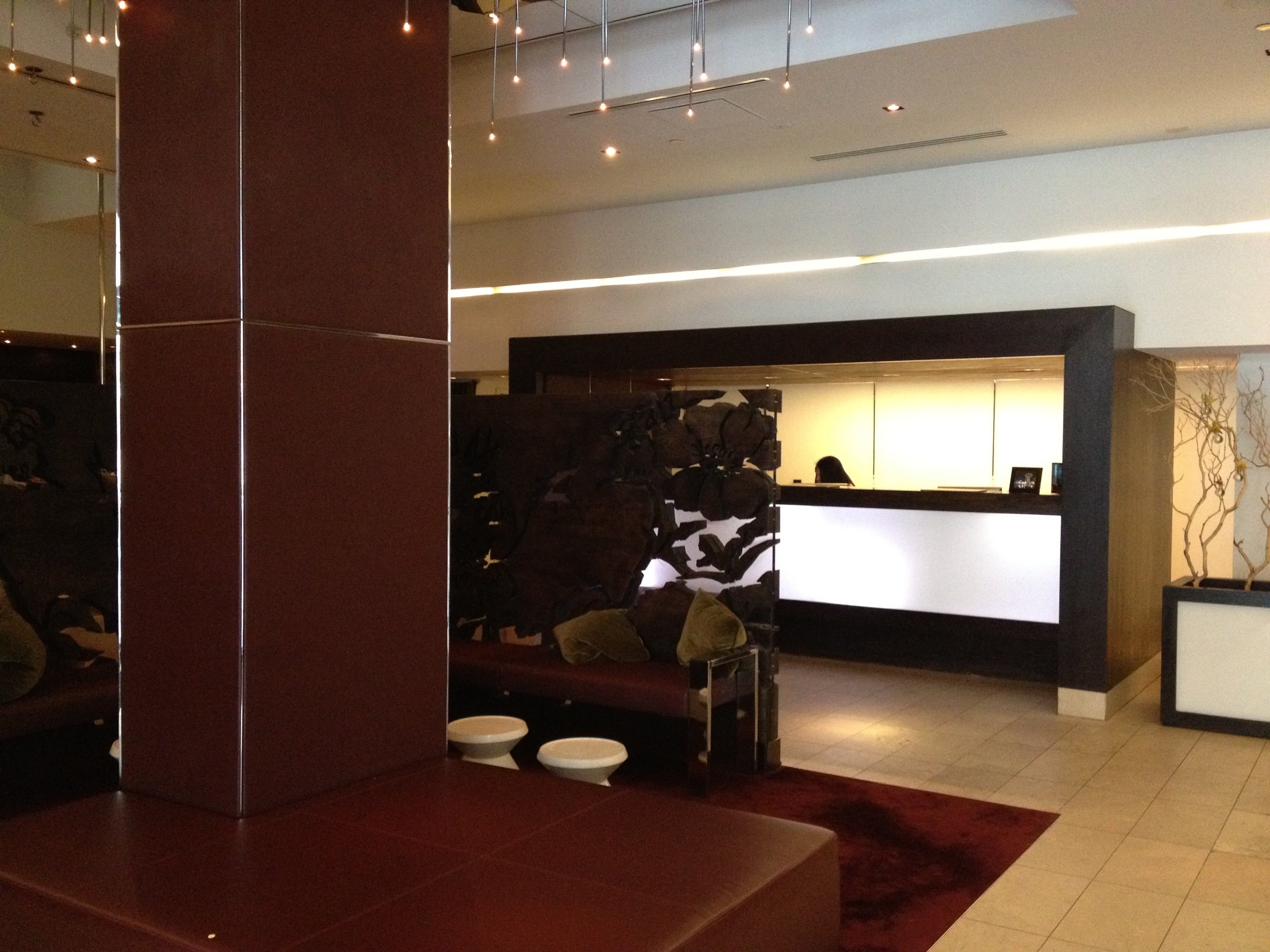 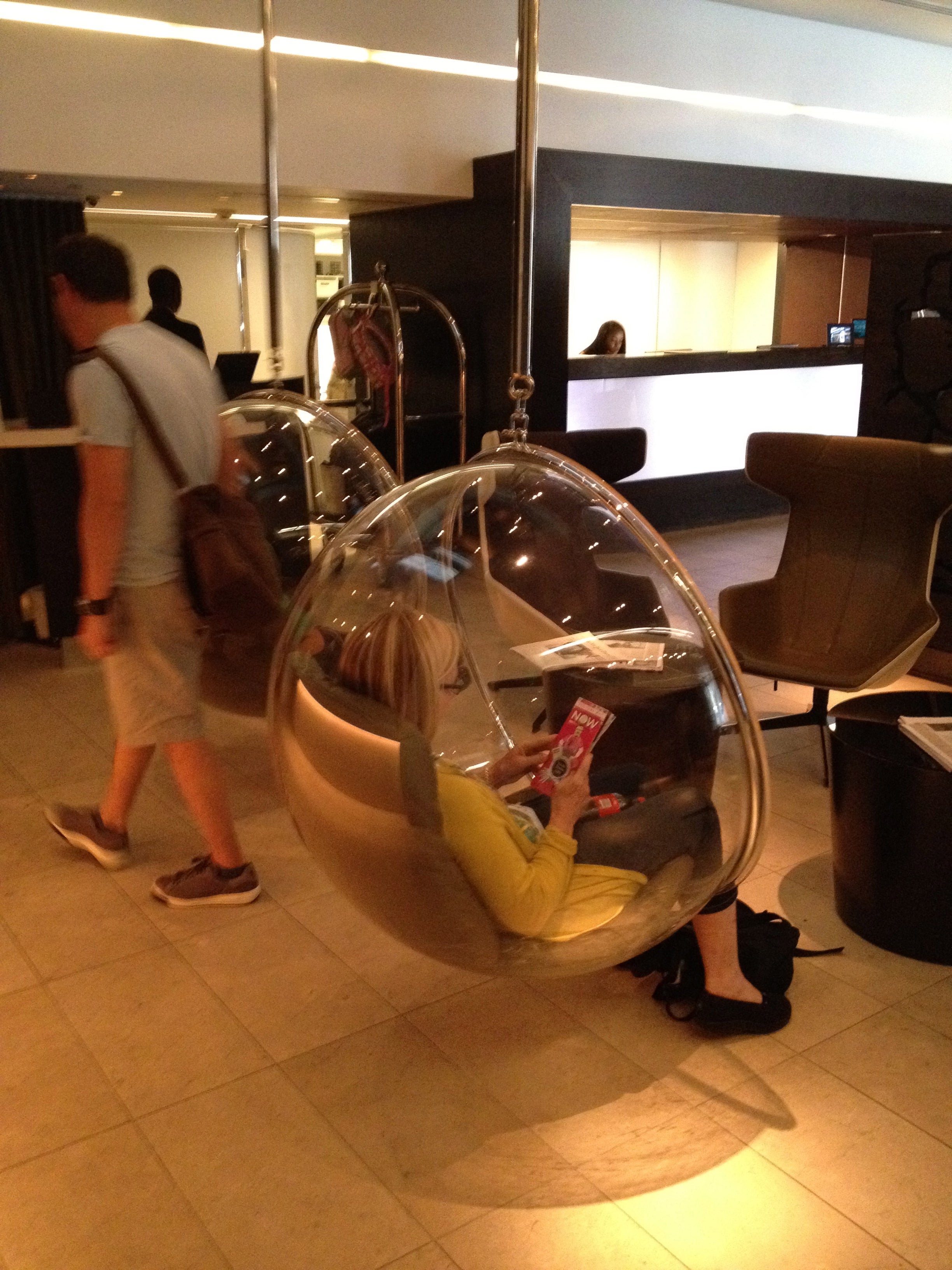 This hotel continues in the tradition of being fun and funky.  From the lobby with the swinging chairs, to the zebra and leopard robes in the room, to the rooftop pool that seems to be quite “the scene”, this hotel is a fun spot.  In fact, I really did not feel cool enough to even sit in the chair in the room.  However, given the view that could be seen out the window, I gave the chair a shot anyway.  It was actually a pretty comfortable chair to sit in and work on the computer, which reminds me of something pretty cool about the Kimpton InTouch loyalty program.  If you belong to their rewards program then you get free internet at their hotels.  When you log on the internet, it even prompts you to join now if you want to get the internet for free.  Not a bad way to save $10 a day.  I saw on their website you also get a free $10 minibar credit with each stay – too bad I didn’t read that while I was still at the hotel! 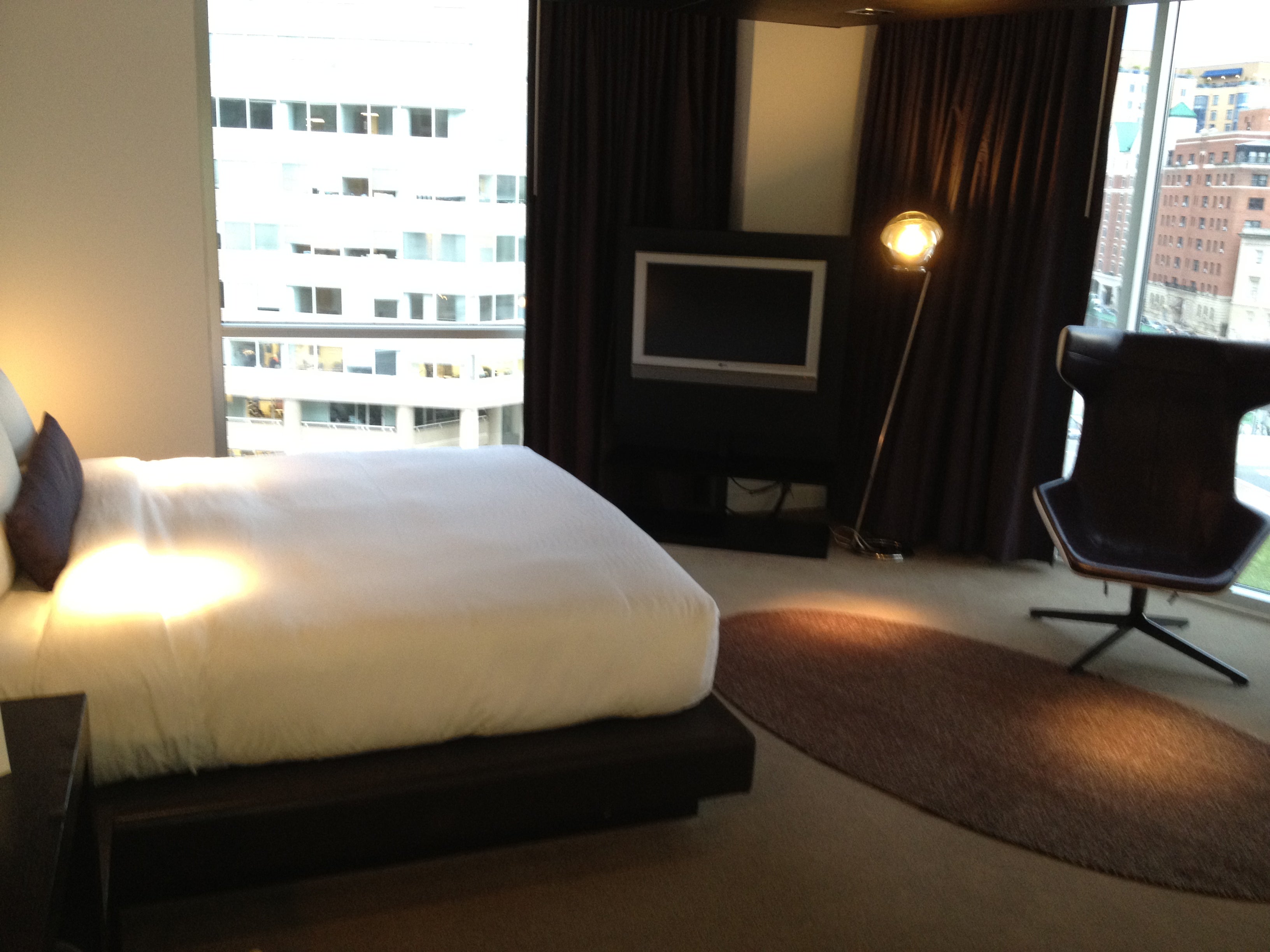 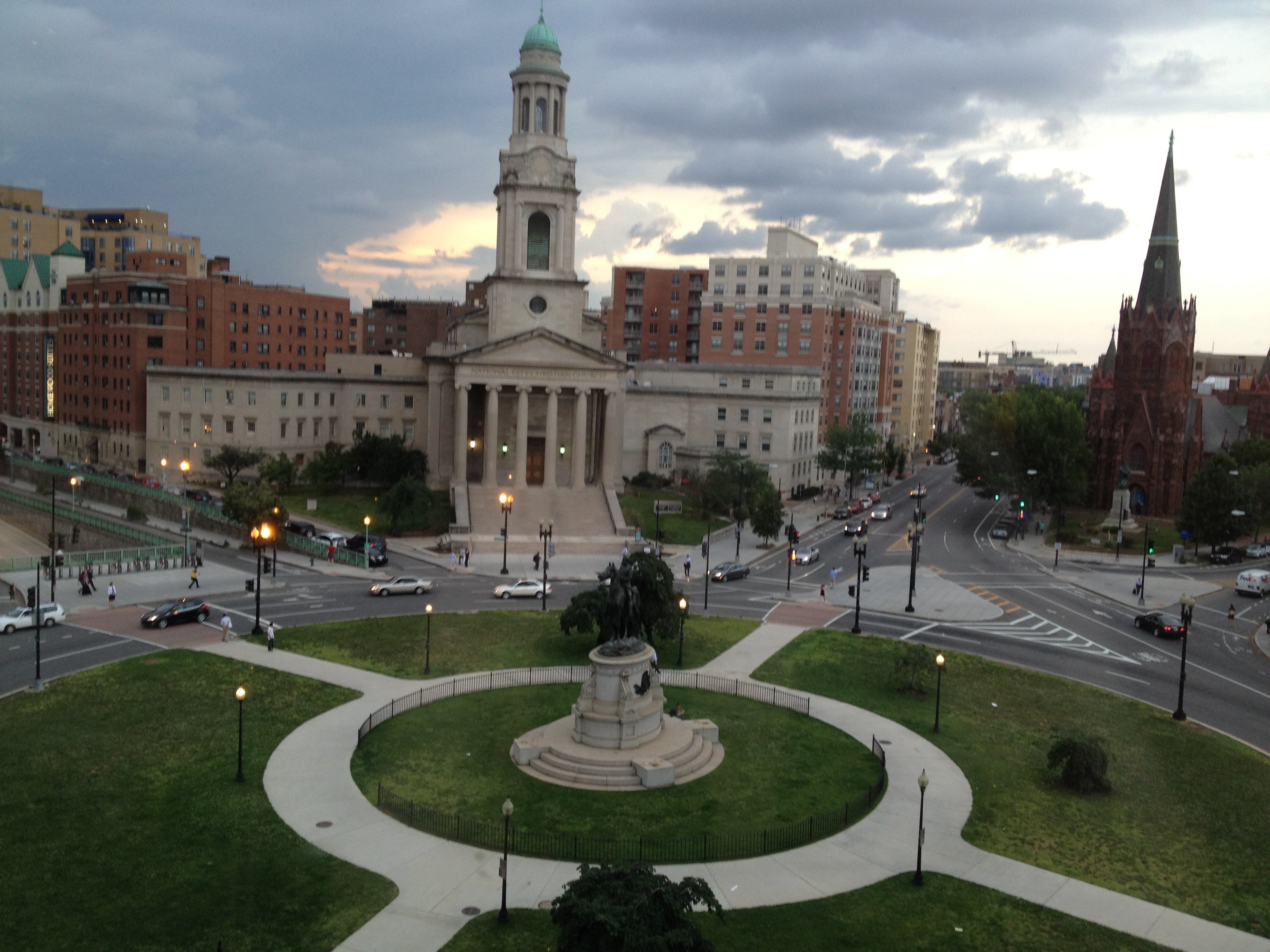 The hotel had left a big bowl of fruit for us in the room as well as a personalized note welcoming us to the hotel.  I have no idea if that was something the Travel Channel helped set-up, or if the hotel did it on their own, but it was nice to have a healthy snack waiting for us.  It reminded me of the Diamond amenities that Hyatt offers.  What would not have been nice would be if I had been traveling with my toddler and she had seen the mini-bar snacks sitting out on the counter in the room.  If she would have seen the bags of M&Ms and other candies it would have been WWIII trying to explain that they weren’t really ours to eat.  Sorry C, those M&Ms in our room aren’t ours, but might I interest you in a delicious banana that is also sitting in our room that is ours?  She likes bananas, but that would have been a hard sell. 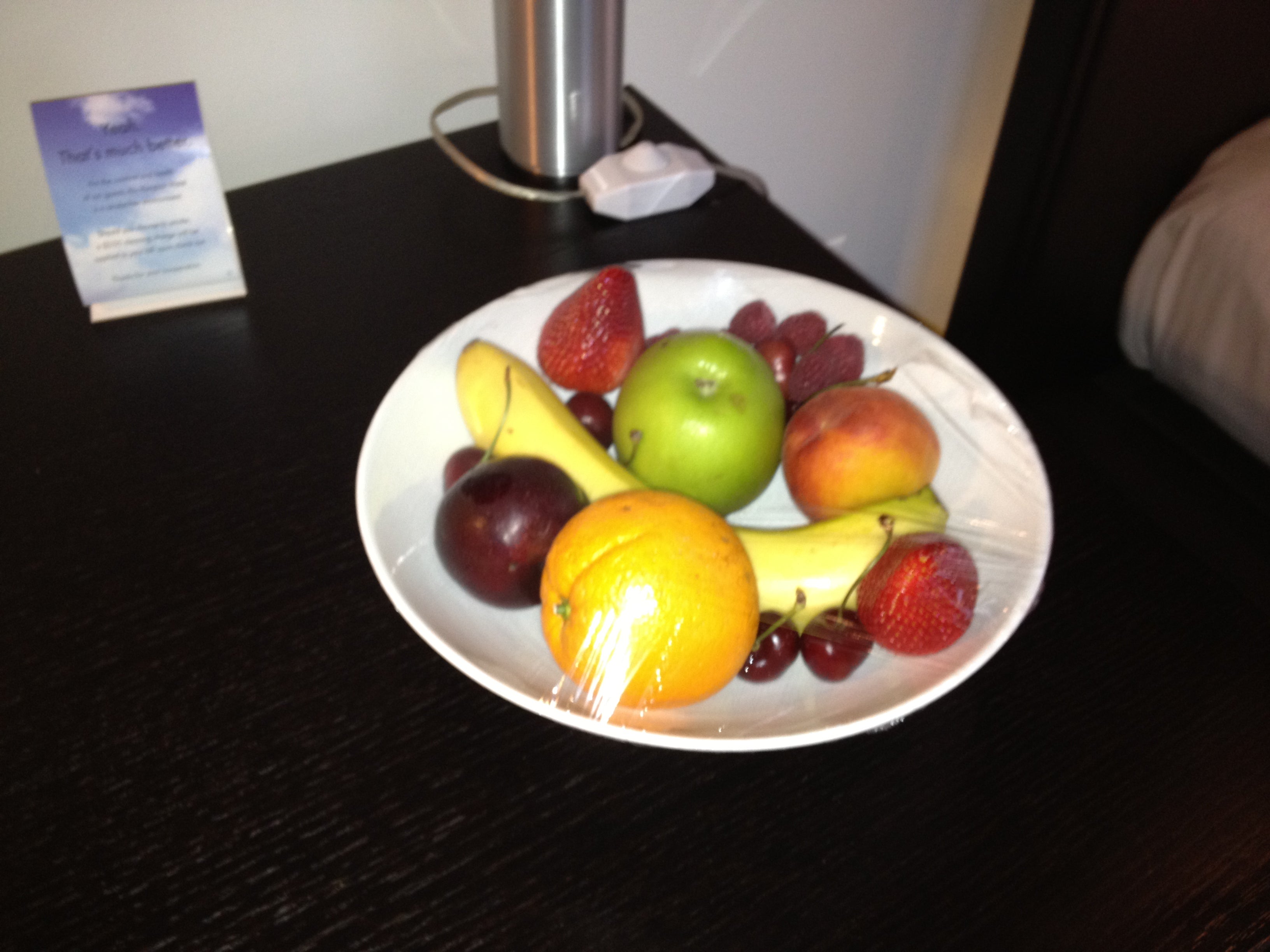 One strange thing about this room was the bathroom.  The shower had no actual door, and for lack of a better word, it was just kind of a different scene than I am used to.  The water pressure was not spectacular, but otherwise the strangely designed shower worked out just fine.  There was also a deep (but narrow) bathtub in the bathroom that my mom seemed to enjoy. 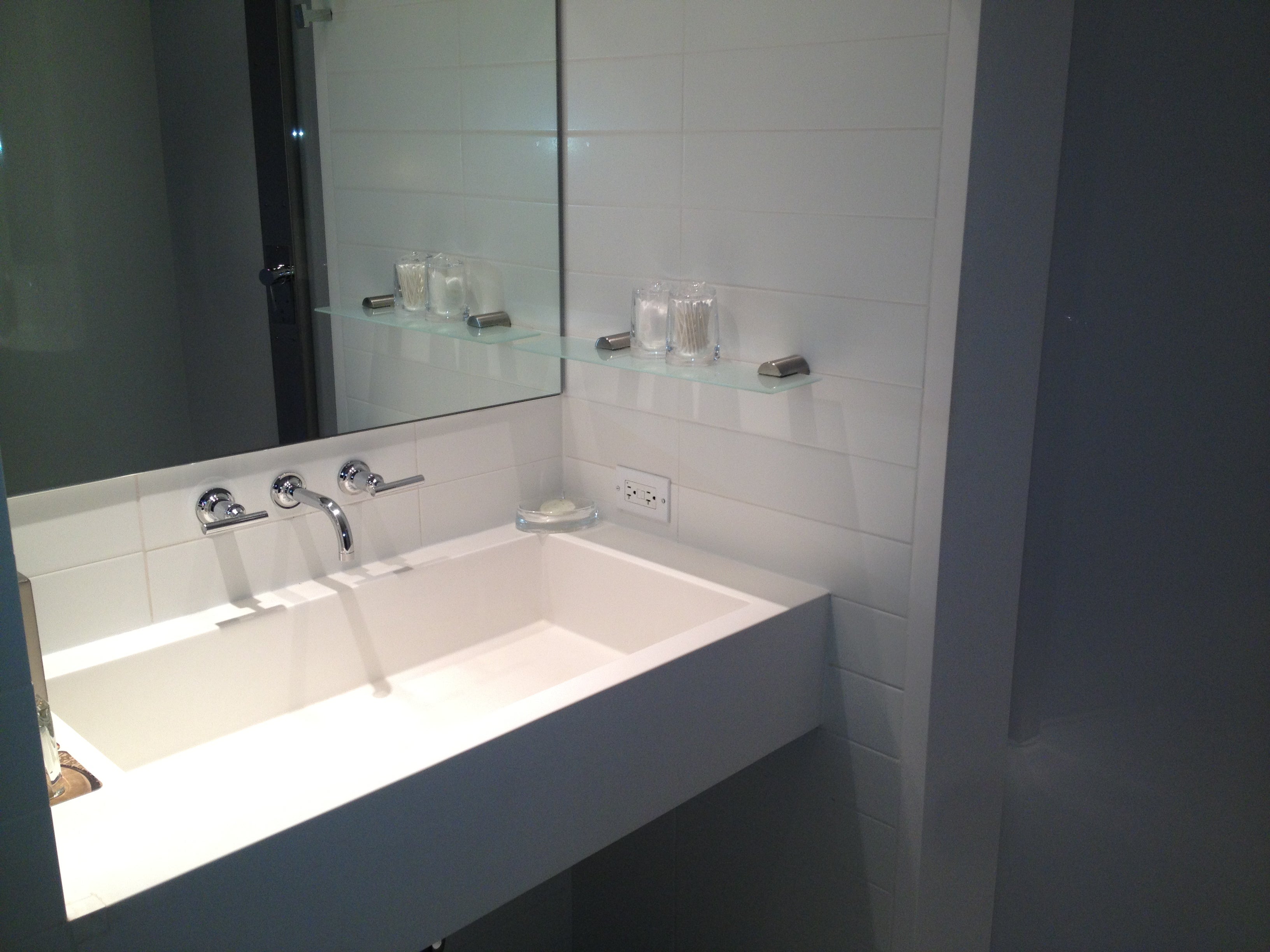 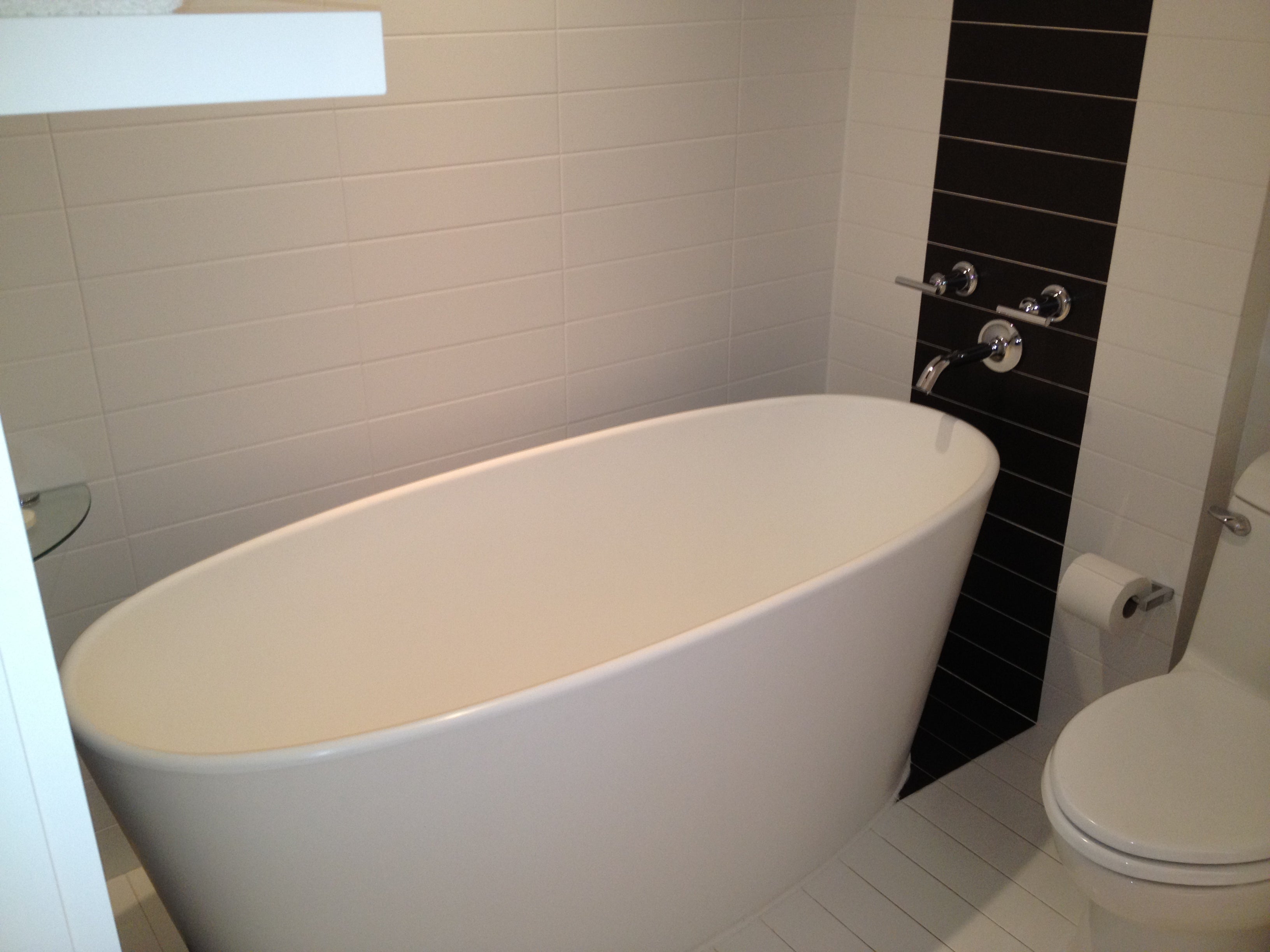 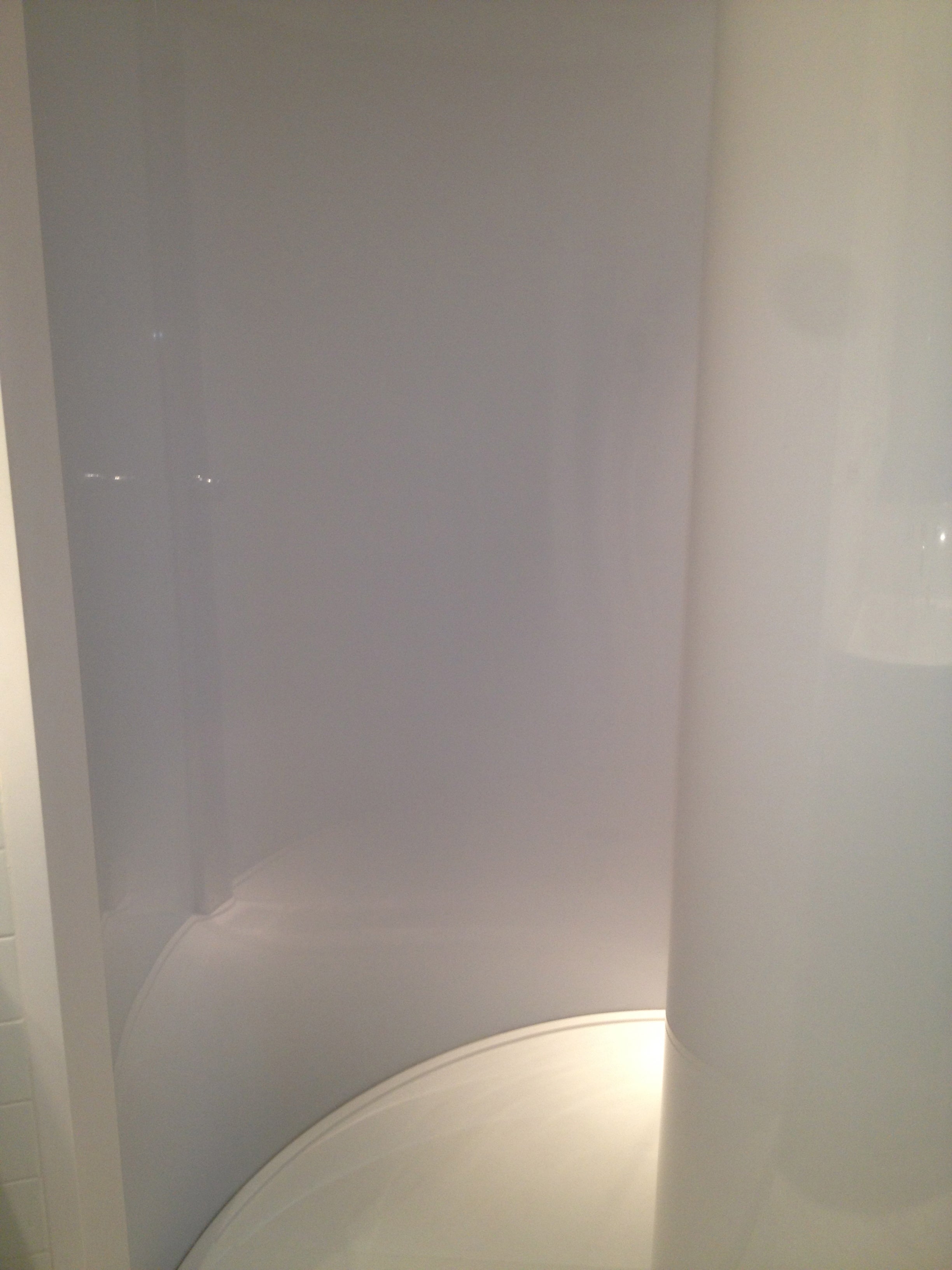 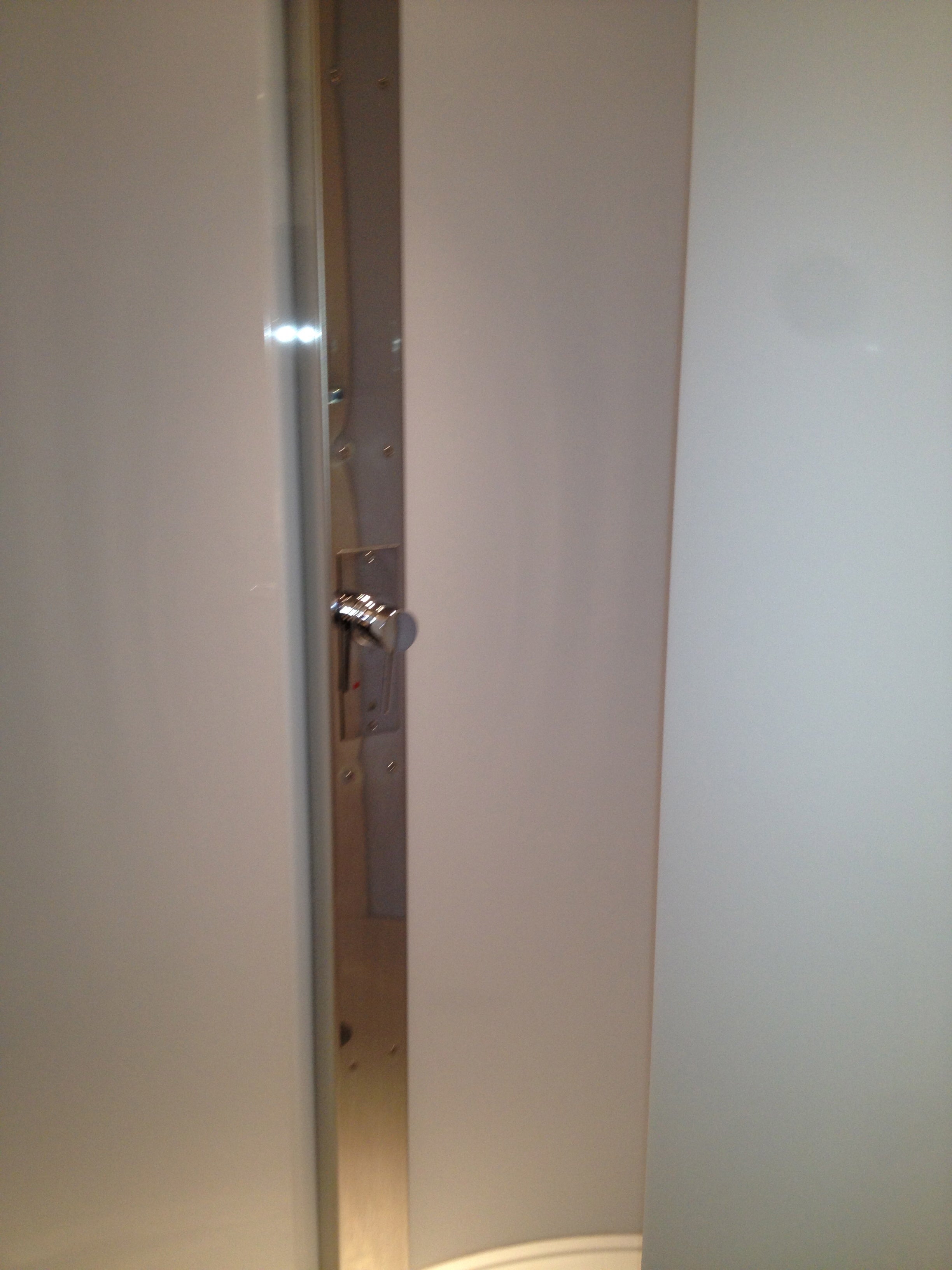 The pocket door to the bathroom was incredibly difficult to close, in fact it was almost comical watching us try to open and shut the door.  I think it was mostly due to the very small handle you have to pull with.  If you were traveling by yourself that wouldn’t really be a big deal, but it was a bit annoying to have an upper body work-out every time you want to go to the restroom in the middle of the night. 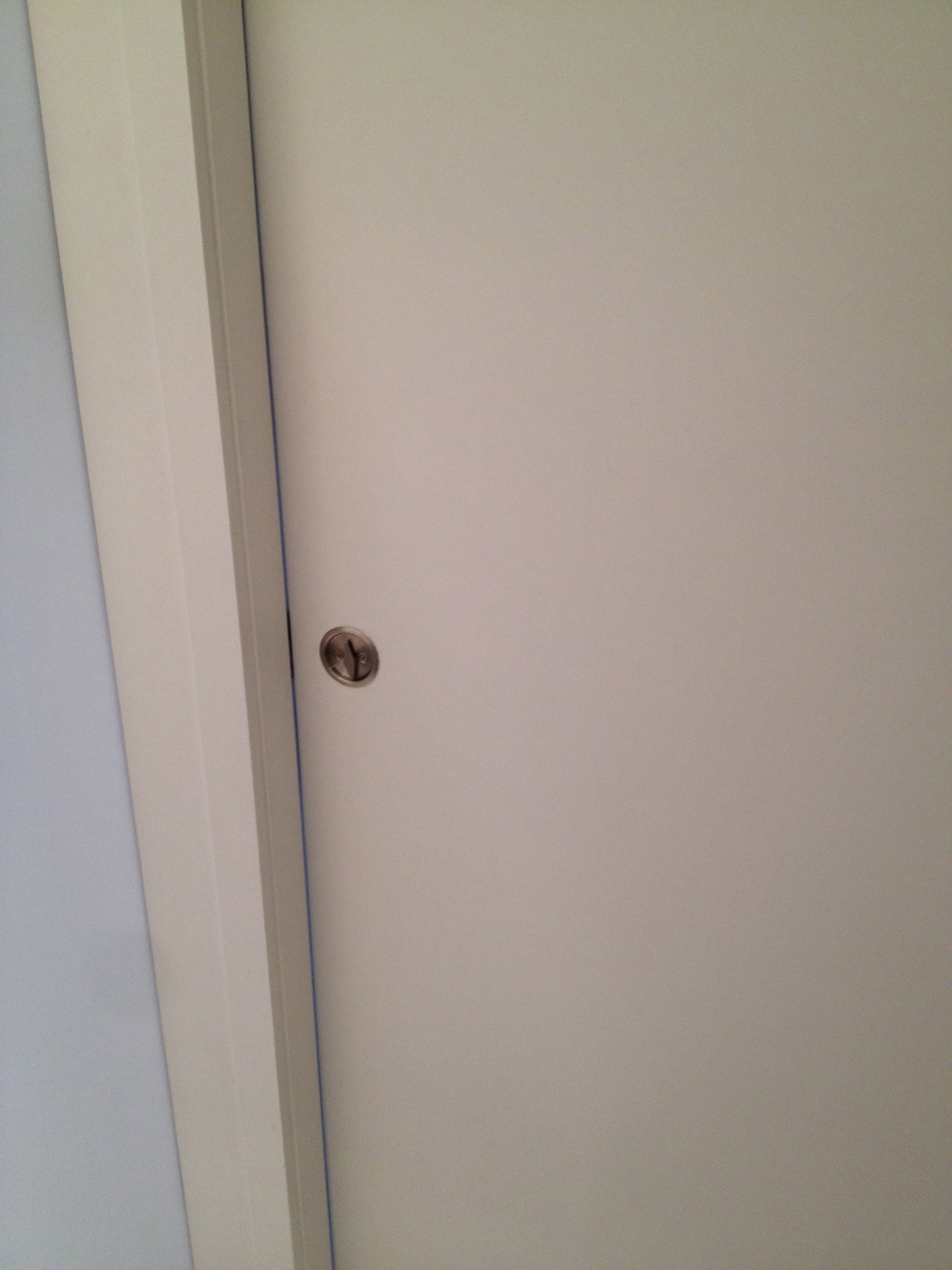 The bed was low, but pretty comfortable.  We were up disgustingly early both days, so this wasn’t an issue for us specifically, but due to the very large windows in the room, there is no way to prevent light from coming in as soon as the sun comes up in the morning.  Again, not a problem on this trip, but if I had been in the position to sleep in late, it might have been an issue.  Did you know that the sun is up in DC at 5:45AM?!  I thought when our wake-up call came it would still be dark outside, but the sun was there to greet us.  I had been up late studying for the ten video blogs and making some cheat sheets to remind me of what to talk about (which totally made me feel like I was in high school again), so 5:45AM felt even more painful than it otherwise would have.

Aside from making some training videos at my previous job, the world of video production is one totally foreign to me.  It was quite the interesting experience trying to get good takes in between helicopters flying overhead, the sun going in and out of clouds, emergency vehicle sirens going by, and the men on the next building over drilling on concrete and doing other loud construction-related tasks.  So, there was a little bit of pressure to get things right on our takes as our window of time was a bit short.   If I had been an outsider watching the process, it would have actually been really funny!  This “job” wasn’t near as hard as the one that the men working construction on the building next door had, but it did have it’s own unique challenges that were brand new to me. 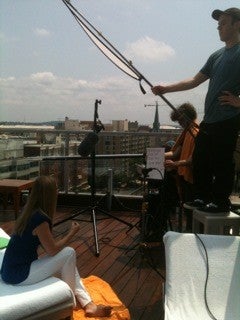 In Part 2 of this post, I’ll tell you more about some of the video clips we worked on, as well as about some of the attractions my mom and I got to visit during our extremely short, but fun, visit to DC.  Just so you don’t worry unnecessarily, the video blogs don’t expose any deep dark secrets or specialized “tricks” related to miles and points – they contain some entry-level info related to miles, points, and inexpensive travel.

Overall I very much enjoyed our stay at the Donovan Hotel.  The staff was nothing but courteous and helpful at every interaction.  While I would certainly consider staying at the hotel with my little one if the price was right, I don’t think this type of hotel is one that is overtly geared toward families.  However, on their website they do have a section called KimptonKids that does highlight some kid-friendly offerings they have – the kid sized robes sound cute!  While they do have some special amenities for kids, they have a perhaps even larger section of the website devoted to pets, including a “Director of Pet Relations” and special “Pet Packages”.  So if your child happens to have four legs instead of two, this may be the perfect hotel for you!  I hope to try out another Kimpton Hotel in the near future, perhaps even with my kiddo next time.

Summer Hull aka Mommy Points, ran the Mommy Points site for families who want to travel more for less using miles and points for seven years and now heads up TPG Family when she isn't exploring the world with her own two girls.
You might like
More shows returning for summer: 8 things to know about Las Vegas during the pandemic
News
25m ago
Eithad plans to retire Boeing 777 fleet in major wide-body shift
News
56m ago
Limited time: Earn up to 100,000 points on this Marriott Bonvoy card
News
1h ago
Chase Sapphire Preferred® Card