Take a Toddler Out to a Ballgame

Alternatively, this could have been titled “One, Two, Three Strikes You’re Out at the Old Ballgame”!  Needless to say, taking our toddler out to a Major League Baseball game was not one of our more successful family adventures, but with the World Series closing in I though I would share our experience in case traveling to a ballgame with a toddler is in your future.  Notice the pouty-face before we even got into the stadium! 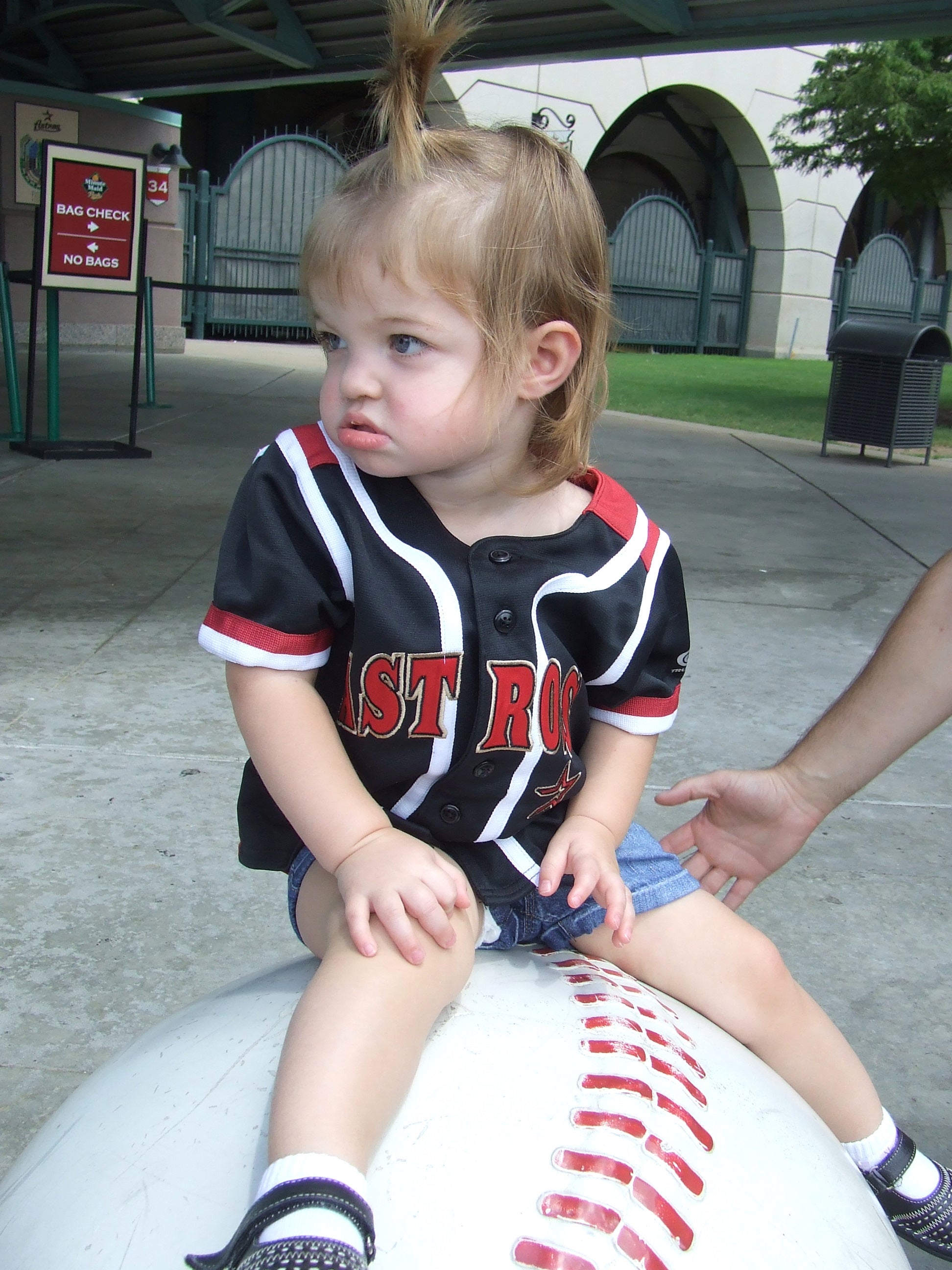 In case you are new to Mommy Points, or otherwise are unfamiliar with some of Little C’s personality traits, she is not a passive individual.  She is not a baby (er, almost two year old!) who will just sit back and take it all in.  She is a go-go-go getter and has been since she was born.  Literally.  This is one of the reasons we have to be extremely prepared with activities when we fly – her personality requires it.  Other babies are a bit more “chill” and are easier both to fly with and attend events like baseball games.  If you have one of those easier babies, then most of what I say in this post will not apply to you.  Lucky you!  :)

Anyway, we knew she would not just sit in her seat for three or four hours and watch America’s Favorite Past-time.  That was okay though, we had a plan, and we were determined to give it a shot.  Our plan consisted of a six-adults-to-one-toddler ratio, lunch during the game, play time at the on-site playground, time to explore the stadium, and when all else failed – cartoons on the iPhone.  I thought with that rock-solid plan, we would at least make it into the sixth inning.  The crux of our plan really was the fact that there were six of us going to help take turns with Little C while the other five enjoyed some of the game.  That plan got shot to pooey when one of our family members got very ill on the drive to the ball park.  By the time the car carrying four of the adult attendees arrived, one of them got so ill in the parking lot that they had to all turn around and drive home without ever getting into the stadium.

Since The Man, Little C, and I had arrived ahead of them, we had no idea this happened until after they were already half-way home. With their departure, our brilliant plan to see an Astros game had left as well.  Our two-to-one ratio with Little C and a ballgame never stood a chance.  Knowing our little one, we would never have tried to go to a game with just the three of us intentionally.  But, since we were already there, we did our best.  Here is how it went……..

There was a few good parts to the outing, so we will start with those. 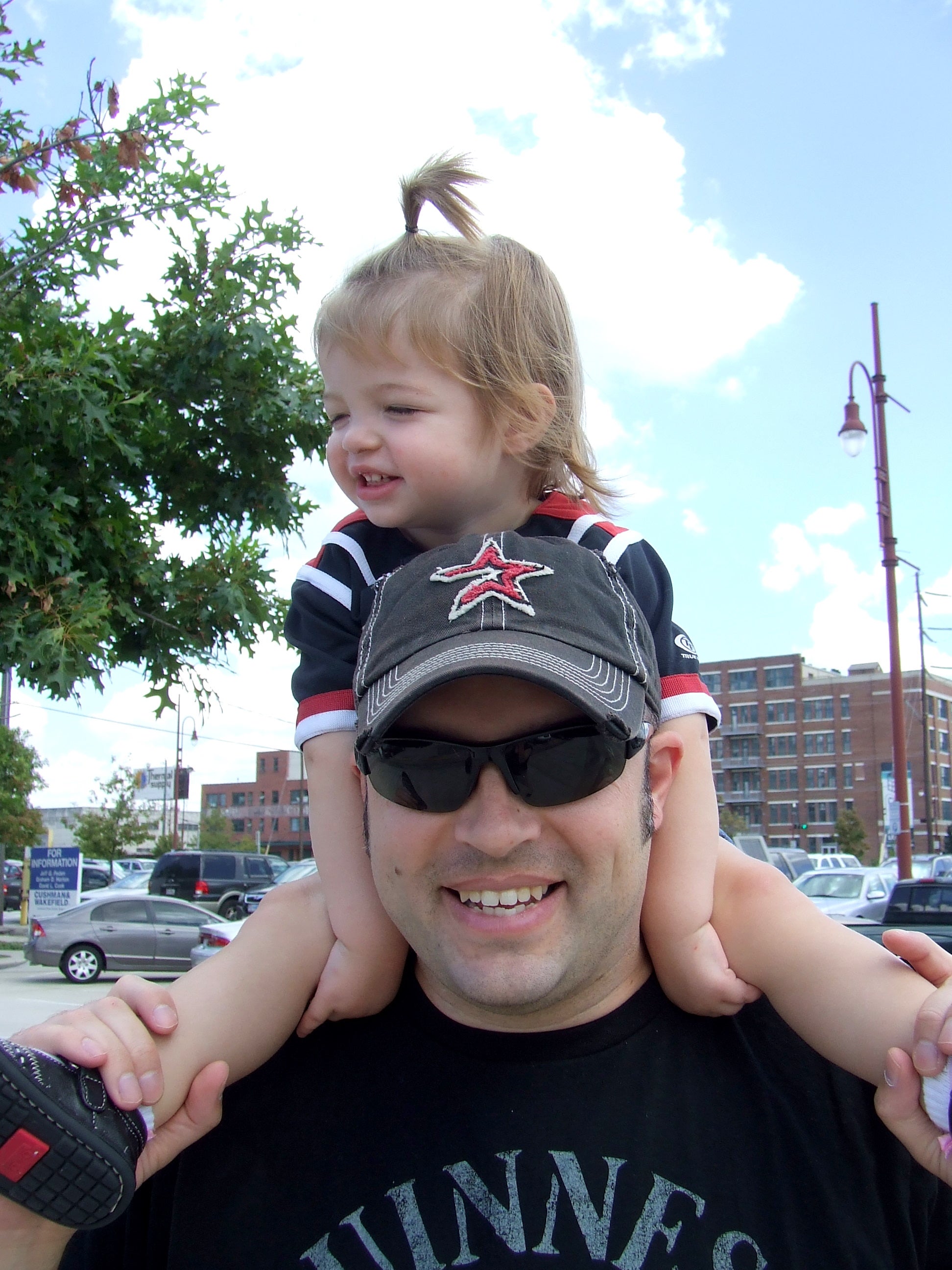 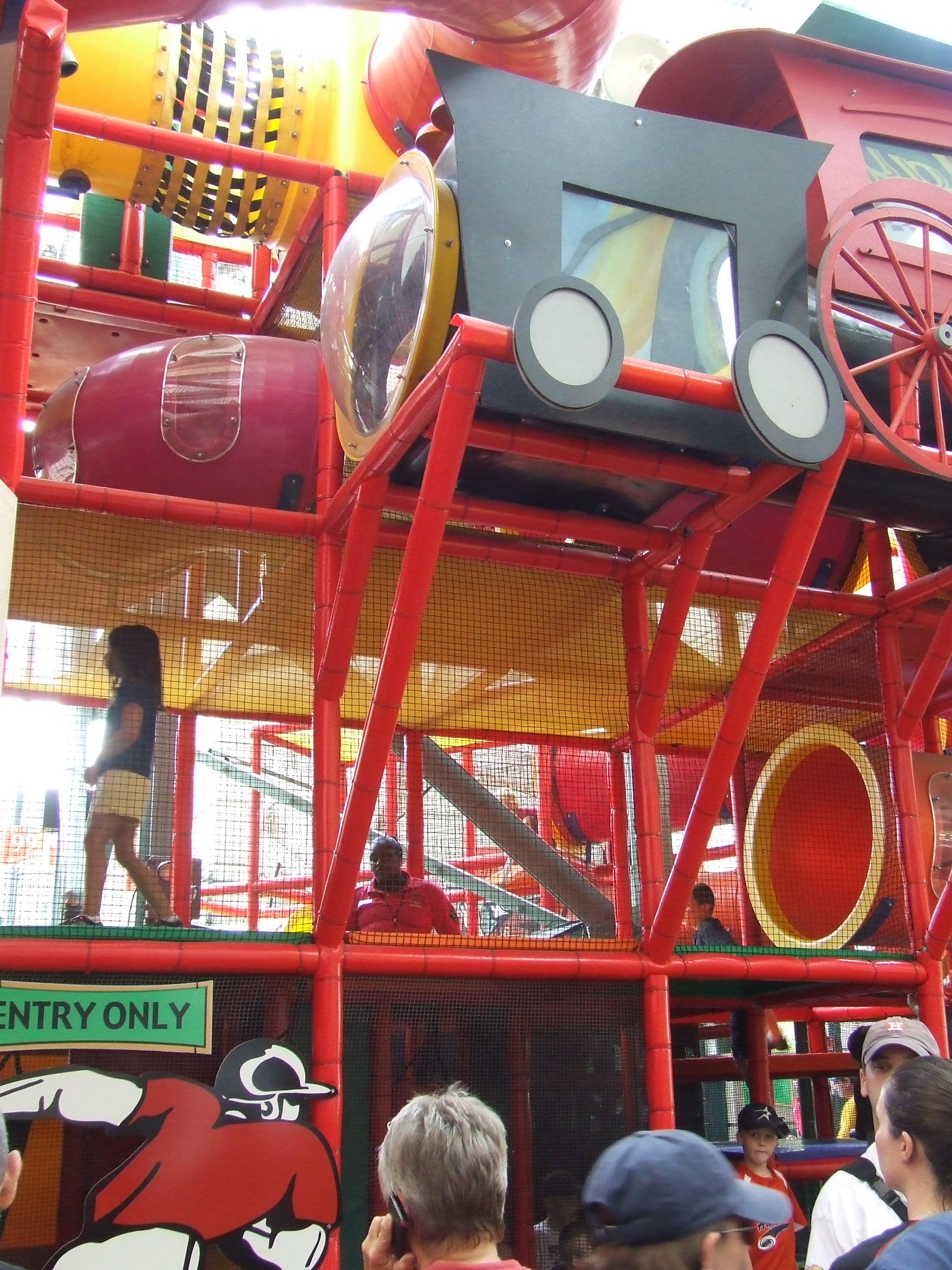 They had a fantastic play area for kiddos.  Most of it was geared for kids a little bit older than C, but she had some fun there, too. 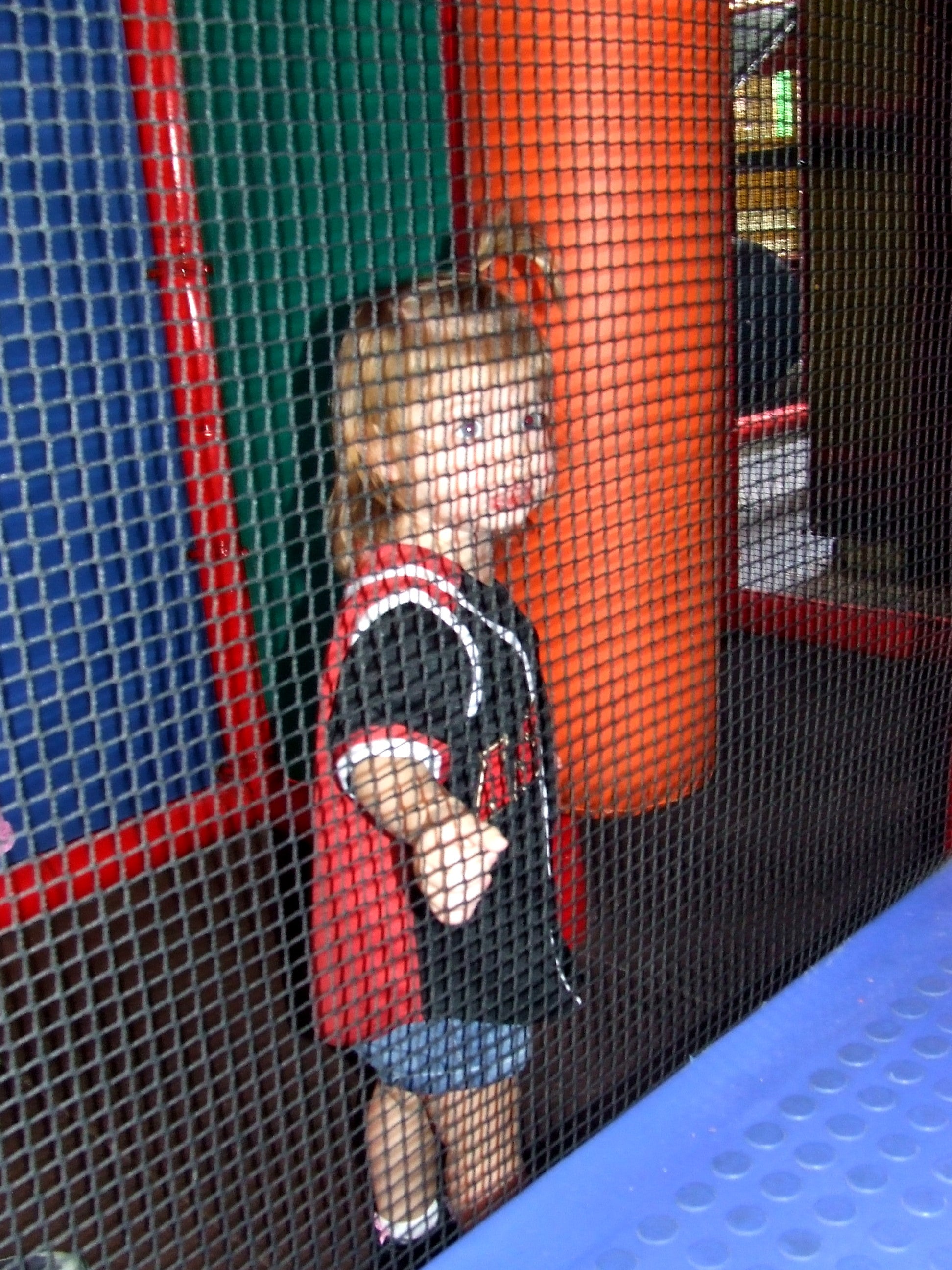 When we first got tour seats, she was excited to take it all in.  That lasted for about .642 nano-seconds, but it was good while it lasted.  We didn’t actually buy her a seat since kids under two got in free, but since there were plenty of empty seats, we were able to spread out some.  That was also a big plus. 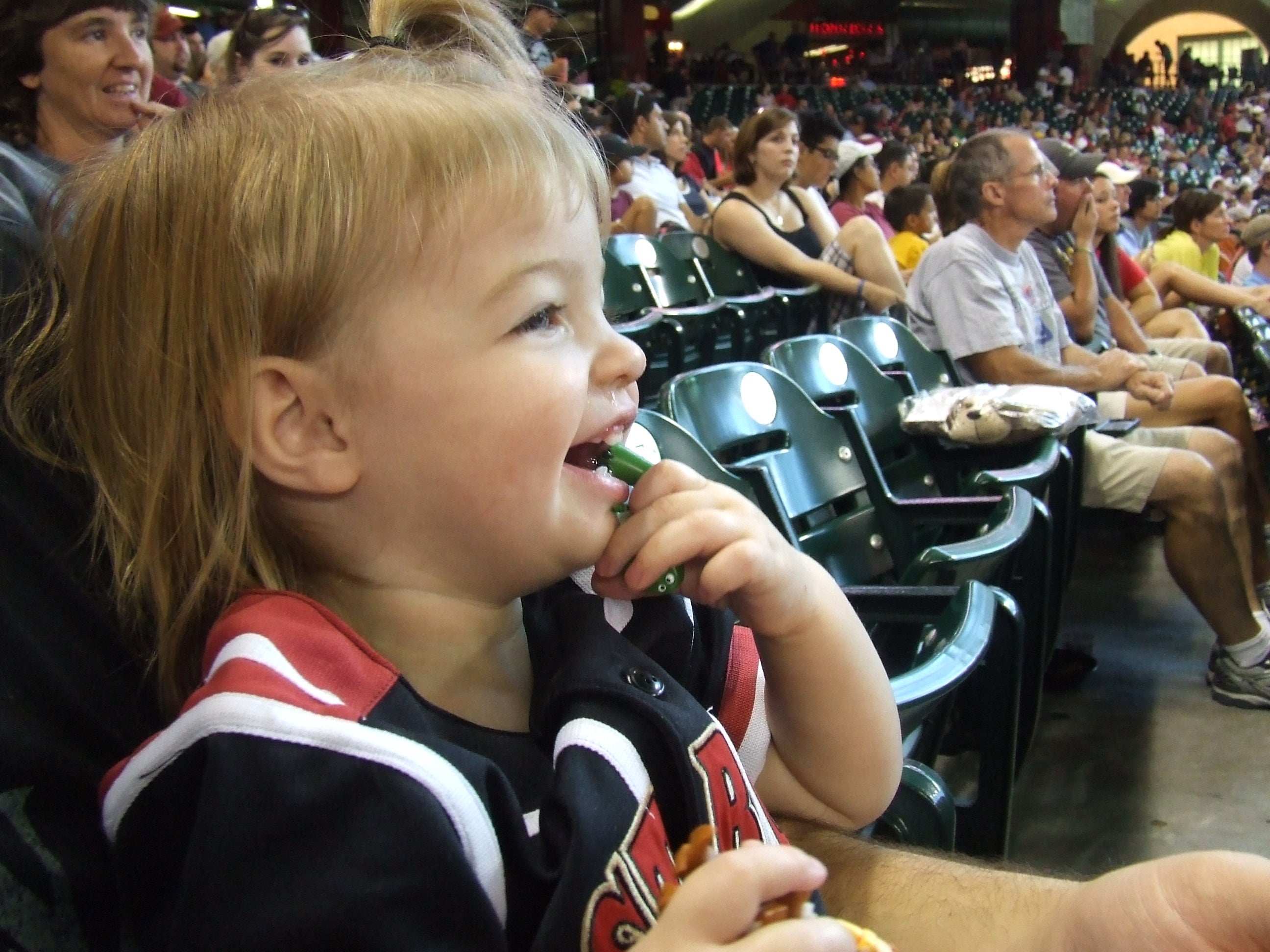 Another successful part of the day was sitting in our seats and snacking on ballpark food.  When we first got in our seats, we still didn’t know that the rest of our crew wasn’t joining us.  If we had known that, we would have waited a while before pulling out the “snack card”.  Snacking/eating will always buy us some time with C.  Unfortunately, she was pretty much done eating before the first pitch was thrown.  We would have stretched out the snacking portion of the day much longer if we would have know it was just the two of us and her.  Oh well, we got to hear the National Anthem while C sat happily in our laps munching away on some fried, cheesy concoction. 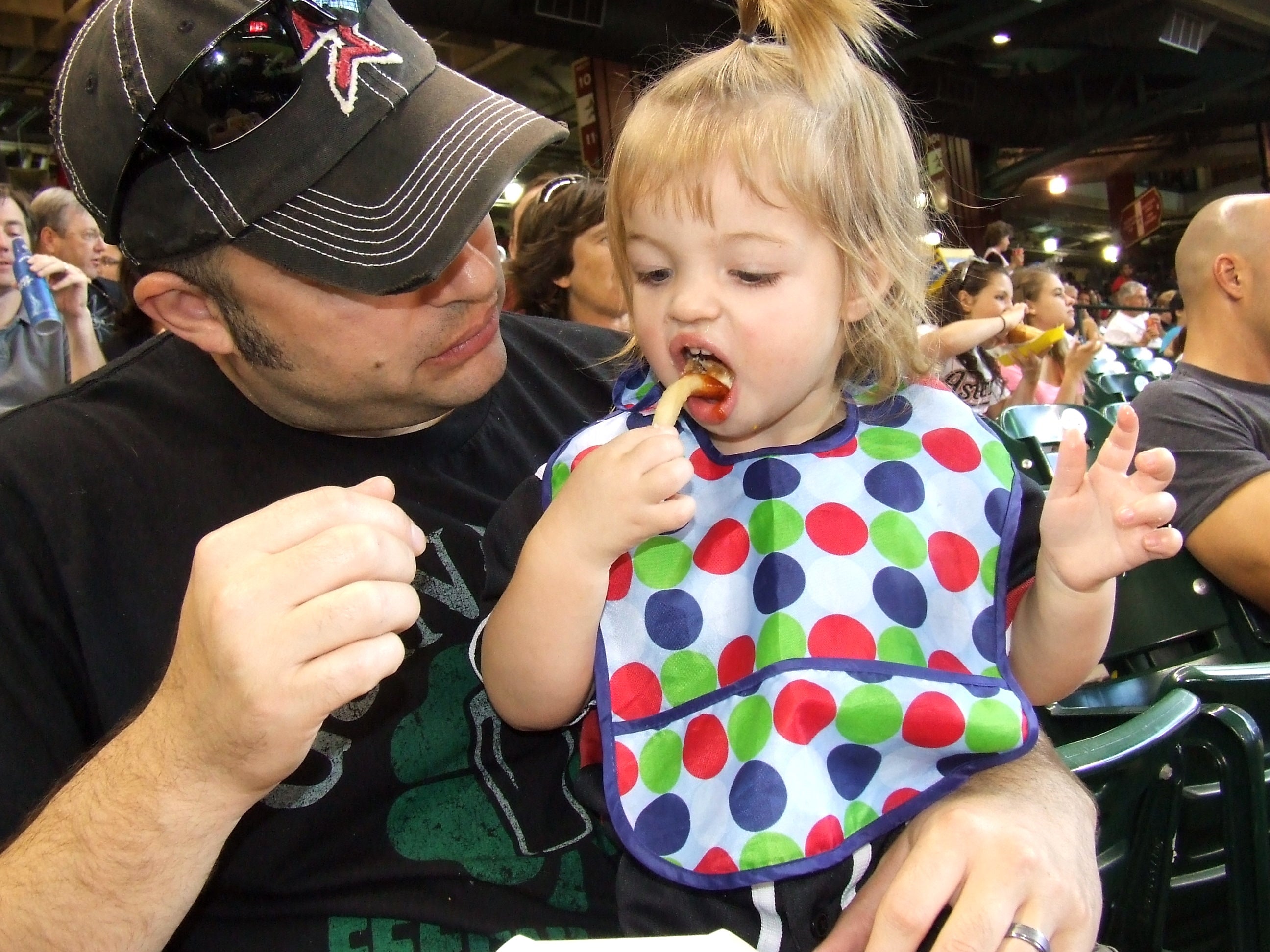 Once lunch time ended, she was really not happy to just sit still in the chairs.  I tried to get her excited about the game and talking about what was happening, but that went over like a ton of bricks.  Five minutes of interest was about the maximum we were able to get out of Little C.  She also didn’t like trying to watch cartoons on the iPhone, because it was just too loud in the stadium for her to be able to hear the cartoons.  The visual alone was not enough to hold her interest. 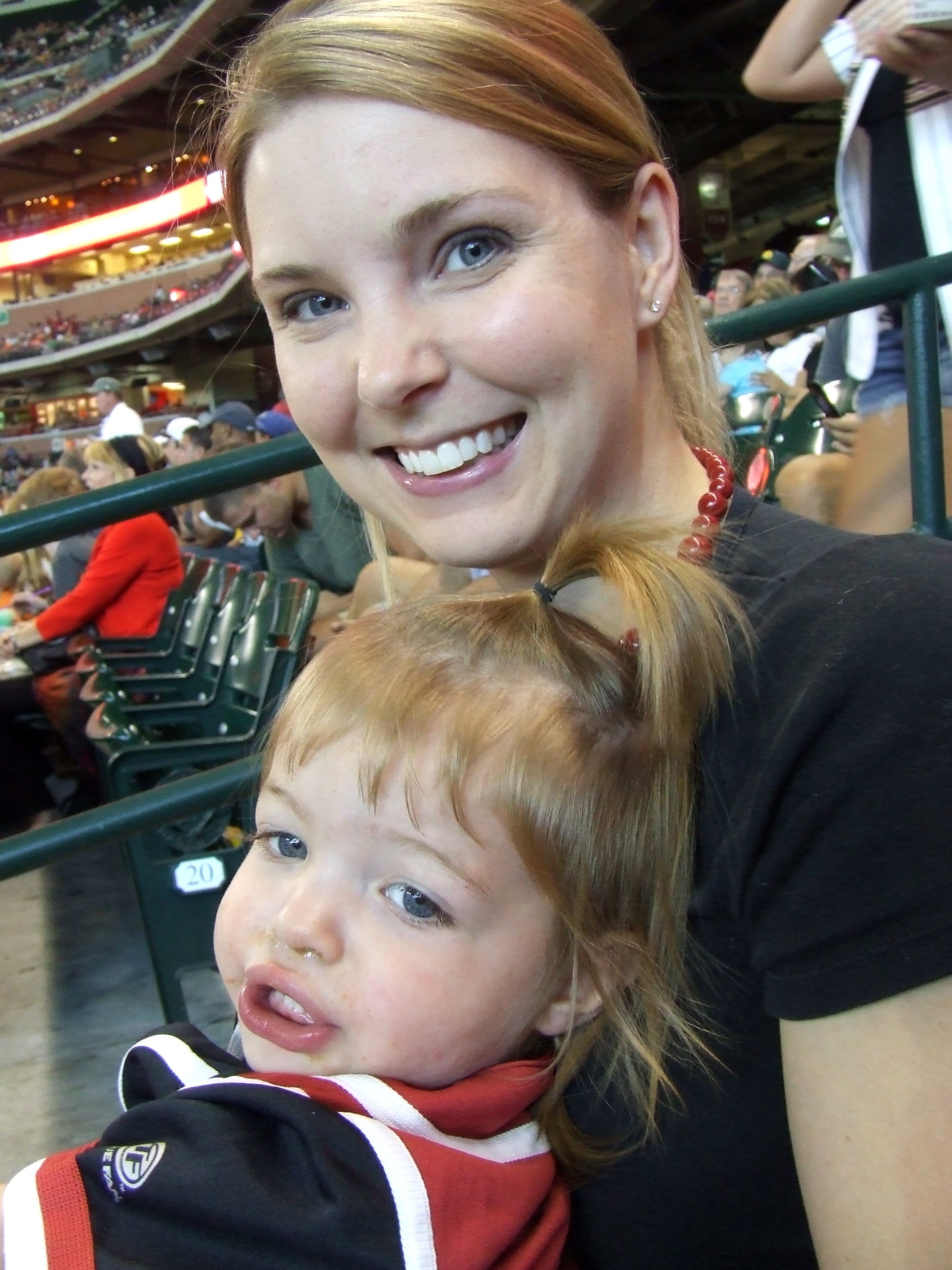 Note Mommy smiling and Little C having none of it.  We tried taking turns exploring the stadium and the gift shop with her while the other one watched the game, but it just wasn’t very fun watching the game by yourself.  Since we thought there would be a 6:1 adult to toddler ratio, we also felt massively unprepared when we found out no one else was joining us.  If we had known that from the start, we could have packed many more things for her to do (just like we do when traveling).  I think we were also just a bit bummed about how the day turned out (and worried about our ill family member), so our moods probably didn’t help the situation.  The lesson there is – always be ready to do it yourself!  You just never know. 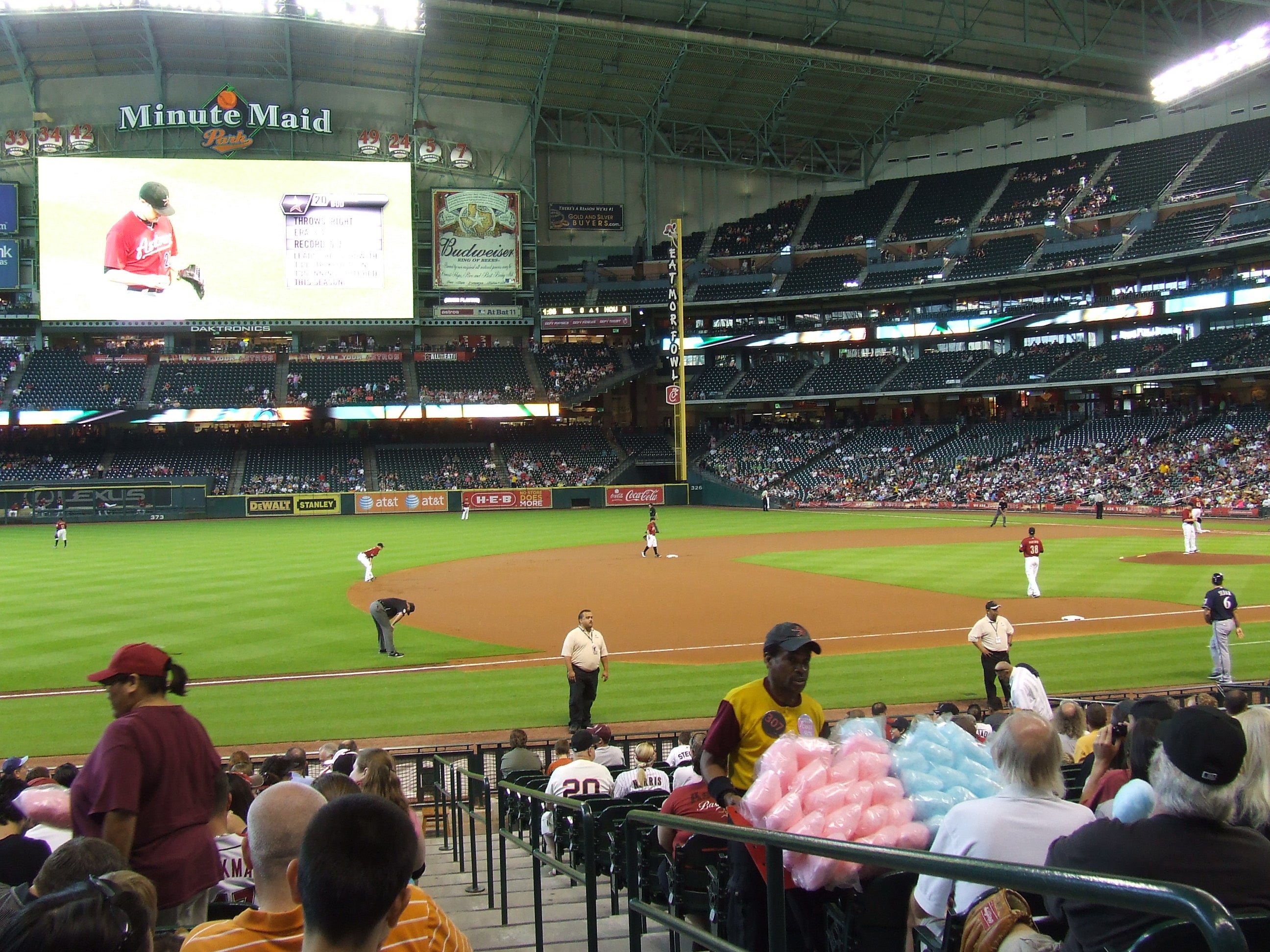 Had we snagged one of those pink or blue mountains of sugar that they were hawking, we probably could have bought a little more time at the ball field – and quite possibly a massive tummy ache.

It was a bit ugly to see a sippy cup in the drink holder where an over-priced baseball beer belongs. 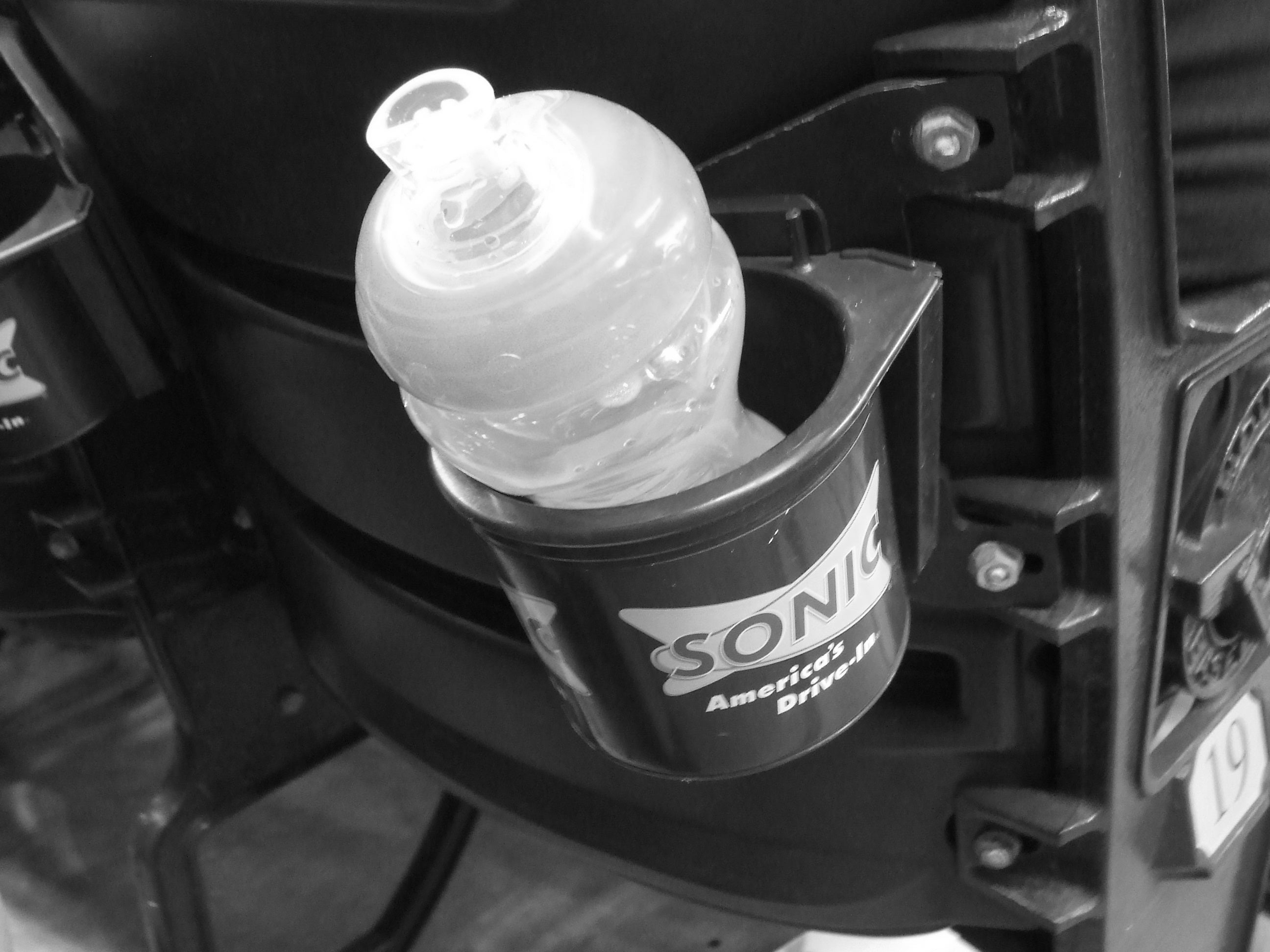 Other than that obvious tragedy, I think we left by the top of the third inning.  It just wasn’t working.  We weren’t prepared to try and entertain Little C at our seats, neither of us were really enjoying watching the Astros get spanked by ourselves while the other one walked around the stadium with C, and she was not in one of her more amiable moods to begin with.  Sometimes you just have to know when to cut your losses and bail out.

If all family members who planned on attending had made it, we would have easily been able to make it through much more of the game by taking turns exploring the stadium with C.  Had we been better prepared to manage her alone, we also could have been more successful in seeing some of the game.  That being said, I would never voluntarily put C, or us, in a situation where she was expected to sit in the seat while we watch baseball.  I know my kid well enough to know that is a plan destined for failure.  We can keep her entertained in her seat if we need to, but it is going to take all of our focus and energy.  There would be no shot at actually enjoying the game.  If your kiddo has a similar personality to C, I would not recommend taking them to a game until they are older, unless you have enough adults willing to take turns entertaining them.  Otherwise, you would probably be better off catching the game on TV at home.

We may try a game again next year, but only if we are certain that Grandma and Grandpa are healthy and we all drive to the game together!  Of course, given the Astros record this year, perhaps C was just trying to spare us the agony of watching them lose.  Ha ha. Maybe we need to teach her to say, “Go, Rangers!”.

Summer Hull aka Mommy Points, ran the Mommy Points site for families who want to travel more for less using miles and points for seven years and now heads up TPG Family when she isn't exploring the world with her own two girls.
You might like
Masks required, Mickey sidelined: What to expect when Disney Cruise Line sails in August
News
Yesterday
Testing in Portugal: My experience getting a COVID-19 test to return to the US
News
Yesterday
You’ll soon be able to hike a new trail connecting Europe with Asia
News
Yesterday
Delta SkyMiles® Platinum American Express Card