Articles
Ashley Kosciolek has spent more than a decade writing about travel, with particular emphasis on cruises. Her favorite cities include London; Amsterdam; Krakow, Poland; Phnom Penh, Cambodia; Dawson City, Yukon; and anywhere known for outstanding pizza and theater. You can follow her daily exploits, both at sea and on land, on Instagram or Twitter @slyjabroni.
Follow
April 28, 2022
•
6 min read 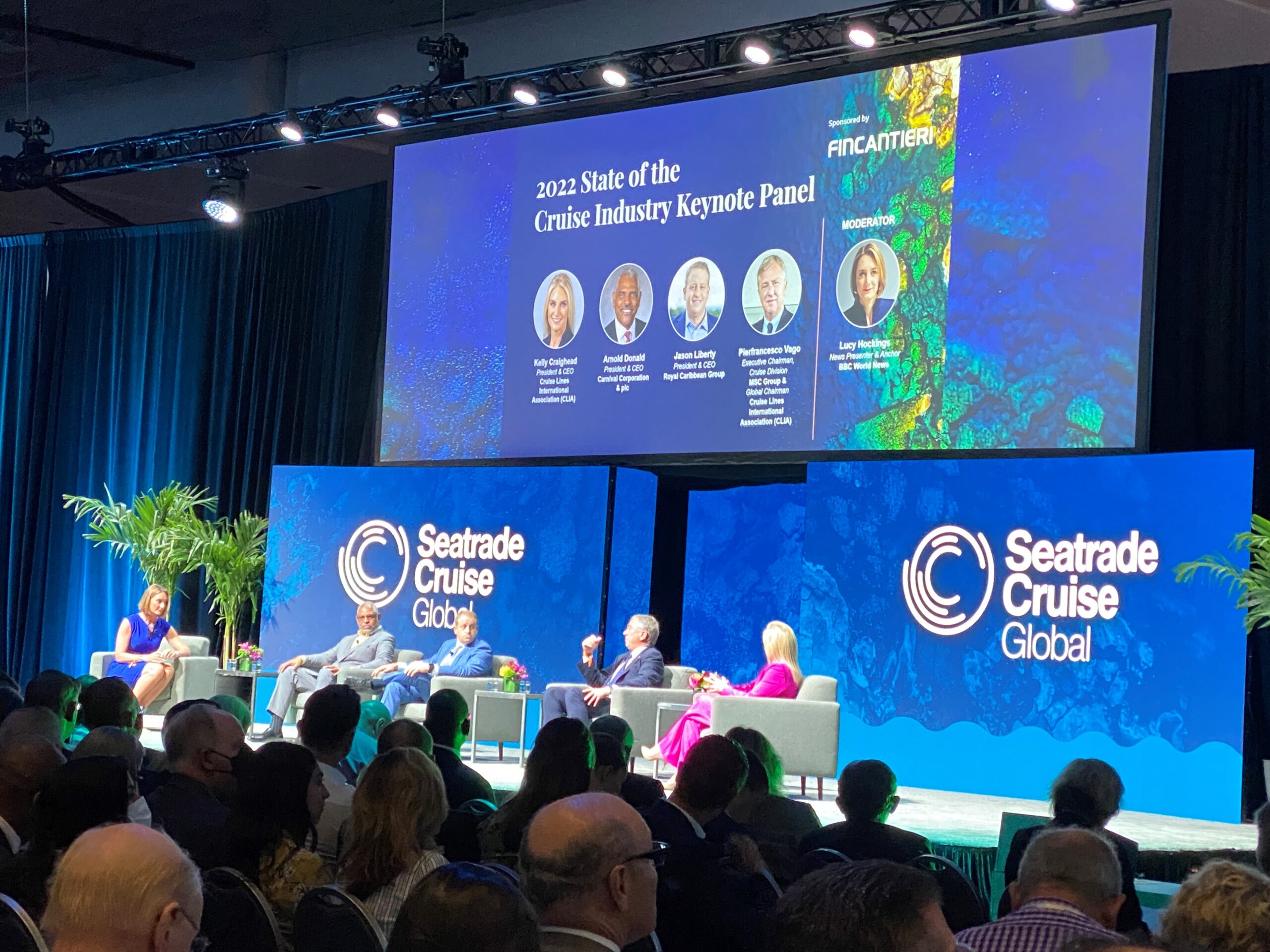 If you thought cruising was back, you ain't seen nothin' yet. That message from the leaders of some of the world's largest cruise lines came through loud and clear during a panel discussion Tuesday at Seatrade, the cruise industry's annual conference in Miami.

The higher-ups have been consistent in their message that, although things are trending upward, lines are unlikely to see things exceed 2019 levels until next year.

But Liberty cautioned that being too certain would be foolish. "I think the word 'futureproof' is dangerous. What we are is diligent, and we are constantly evaluating."

"We expect the back half of this year to begin to normalize," Liberty added. "We termed this as a strong transitional year, and we expect 2023 to look and behave like it did pre-COVID.... What does that all mean [for cruise lines]? All of our ships back up and running, occupancy and rates at levels that we were all seeing pre-COVID -- hopefully better -- and us operating in most of the [destinations] around the world."

What does that mean for cruisers? In the wake of an extended wave season, they could see prices start to creep up as the result of both demand and rising fuel costs. As capacity increases, that also means ships could begin to feel more crowded.

That's not deterring the executives' optimism, however. They addressed, head on, the three main concerns potential cruisers are having right now: COVID-19, cost-of-living increases and the situation in Ukraine.

More than two years after the industry shut down, most ships are back in service, and capacity has increased, thanks to cruise lines' stringent safety protocols, many of which exceed requirements set forth by the U.S. Centers for Disease Control and Prevention.

"Just look at the data," said Arnold Donald, president and CEO of Carnival Corp. "The data [say] the incidents [are] far less on cruise ships than other forms of socializing and travel.... Whatever's in society eventually ends up on the ships, so you have to be able to manage that."

"What the industry has managed to achieve reputationally ... is so important," said Pierfrancesco Vago, executive chairman of MSC Cruises, which was the first major cruise line to resume operations with Mediterranean sailings in summer 2020. "I think we really conquered the public opinion on the capability to actually ensure a holiday."

Liberty agreed, stressing that, while perception is great, it's important to follow through. "We all worked very hard on sets of protocols to make sure that cruising not only was perceived but was the safest place you could possibly be.

"I think we've learned a lot about the capabilities of our different organizations, especially around safety and health protocols. I think that we will ... continue to work together to make sure that the platform for cruise and travel will be successful and will continue on."

Although some of the regulations, such as mask-wearing, have been relaxed, the rest largely remain in place.

Another concern for potential travelers is the rising cost of just about everything, from food to fuel, which could not only drive up vacation costs but also cause vacation budgets to shrink. However, with cruises providing notoriously great value for money, there's little worry from the cruise lines.

"The U.S. consumer is sitting on $2 trillion of savings," Liberty said. "[Cruises] still trade, unfortunately, at a significant discount to land-based vacations. You're seeing consumers spend a lot of money for land-based vacations; we have this opportunity to close that gap. We're still a great value relative to others."

Cruises were popular choices in previous inflationary periods, Donald added, because of their great value and largely affordable pricing.

The executives went on to say that, because their vessels are mobile, they're able to sail to different areas to procure the supplies and provisions they need if they're too expensive elsewhere. That has led to the lines' ability to avoid passing increased costs on to consumers -- for now.

"One of the things that we did during this pandemic ... is we had an opportunity to reshape our cost structures, which is allowing us to absorb some of these inflationary elements and maintain and also have the opportunity to grow our margins," Liberty said. "Fuel prices are certainly painful, and a lot of that is being driven by this unbelievable situation that's happening in the Ukraine."

"Ukraine was a shock obviously to Europe," Vago said. "That blocked the confidence of consumers in the beginning. Now, fortunately, ships again are moveable assets, so we stopped calling on St. Petersburg ... so we rerouted our itineraries in Northern Europe to more of the fjords and Scandinavia. We moved away a little bit from the Baltics in a sense. That is bringing the confidence for consumers to rebook.... People are coming back again because they feel secure."

Vago went on to remind the audience that ships are now returning to some areas, such as Tunisia, where political unrest was a problem previously, indicating that the situation in Ukraine is likely to ebb eventually.

The overarching theme of the discussion was one of hope, resolve and tenacity.

"The industry is resilient," Donald said, noting that he believes pent-up demand will fill increased capacity the industry expects to see in the near future. "We've had fuel spikes before. We've had geopolitical tensions before. The assets are mobile.... Fuel prices go up; they come down. The overall trajectory of the industry over all that time has been very positive growth -- and we're still tiny.

"There was a half-billion people a year, pre-COVID, that took extended vacations. [Only] 30 million took cruises because that's all the cabins we have.... We have a tremendous amount of growth opportunity.... The overall future for the business is extremely bright."

Featured image by Cruise line executive speak at the State of the Cruise Industry panel during Seatrade, the industry's annual conference in Miami (Photo by Ashley Kosciolek/The Points Guy)
Editorial disclaimer: Opinions expressed here are the author’s alone, not those of any bank, credit card issuer, airline or hotel chain, and have not been reviewed, approved or otherwise endorsed by any of these entities.