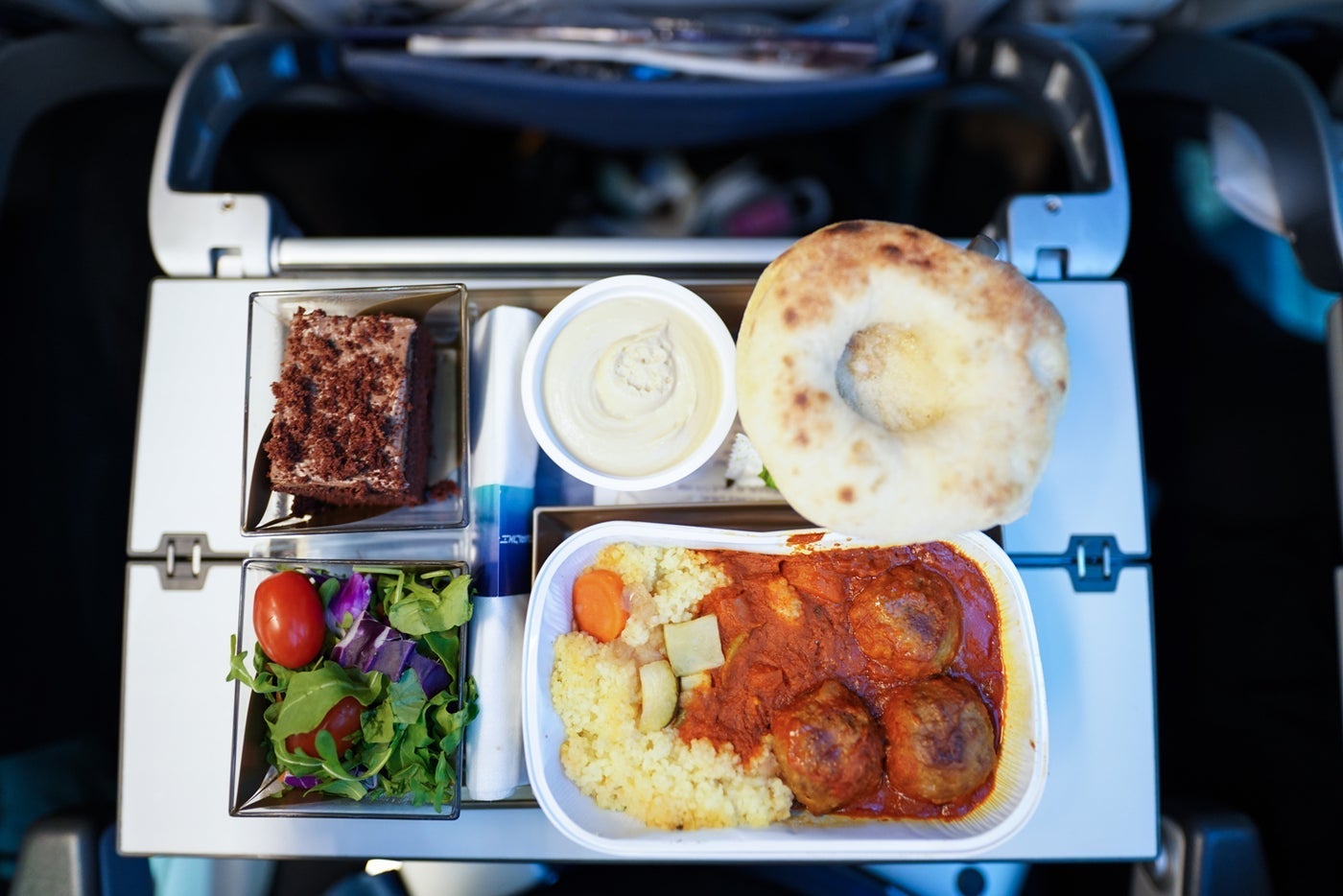 We've said it before and we'll say it again: Not all economy food is bad.

After rolling out our round-ups of the best and worst economy experiences, we thought we'd dig a little deeper and focus on certain aspects of our past reviews.

For starters -- and mains and dessert -- we're kicking this series off with the culinary delights experienced during economy class flight reviews over the past couple of years. The below rankings take into account the best food options our reviewers took in pre-COVID-19 times. Note that if you plan to fly with one of these carriers during the pandemic, the inflight food offerings may be significantly different.

Here are the top five economy class meals in the sky.

You might not believe it, but the winner for the best economy meal in the sky was a flight from San Francisco (SFO) to London (LHR) with British Airways.

Less than an hour after takeoff, TPG Reporter Katie Genter was already double-parked with two mini bottles of wine and two cans of Coke Zero.

Katie described the main meal of olive and mushroom pasta as "tasty" and the salad as "crisp and fresh" -- three adjectives you don't often hear when describing an economy meal.

The presentation and colors of the meal made it look, dare I say, appetizing. If it wasn't for the plastic trays and cutlery, you could be fooled into thinking this was a restaurant meal.

Even the pre-arrival breakfast offering hit the spot, which again, is a rare occurrence on overnight long-haul flights in economy.

There were two hearty pastry options: a mushroom, spinach and potato vegetarian option and a bacon, egg and cheese for the carnivores. Katie tried both, which she enjoyed, despite the meat option being "a little too oily".

All in all, I think it's safe to say that BA deserves the top spot. To manage to serve a tasty, fresh meal for both dinner and breakfast in economy service on an overnight flight is something to be proud of. I could eat one of those pastries right now.

I've never flown El Al before, but former TPG Creative Director Isabelle Raphael's experience from New York (JFK) to Tel Aviv (TLV) made me want to. What's even more compelling is that as an avid hater of airplane food, she "mildly enjoyed" her meal.

While she was careful not to be too congratulatory with her adjectives, the "semi-fluffy pita," "healthy hummus" and "pretty good" couscous and beef meatballs clearly hit the spot.

Related: 7 things you must do during your first trip to Tel Aviv

Even from the picture, I think you'll agree that this looks a lot better than your average economy class meal.

Before you finish drooling over those meatballs, the breakfast Isabelle was served was just as enjoyable, if not more so than her evening meal.

The blintzes, mozzarella and tomato side with a bagel and cream cheese are treats I've never come across before in economy. As Isabelle described, the breakfast was "fit for an Israeli king".

Related: A review of El Al's 787 in business from TLV to LHR

South African Airways appears to be an airline that is very generous with its alcohol offering. Former TPG Reporter JT Genter was served two little bottles of whisky during the pre-dinner drinks service alone. A second full drinks service was also offered while dinner was being served only a short while later -- the drinks were more free-flowing than at an all-inclusive resort in Cancun during spring break.

Now for the food.

JT described his chicken dish as "pleasant" -- it looks quite tasty in the picture, too.

You might be wondering what was so special (other than the plentiful booze) that warranted SA's economy meal breezing into third place.

Economy breakfasts are often a letdown, so when an airline pulls this out of the bag, it's worth shouting about. JT's frittata was "delicious," and it certainly looked it. It almost reminds me of the frittata that used to be served in BA Galleries Lounges pre-pandemic.

A small gripe was that drinks were served after the food rather than with it, which meant passengers had nothing to wash their frittatas down with.

Overall, SAA's economy meal on this flight from Washington (IAD) to Accra (ACC) is definitely deserving of its spot in the top three.

The high rating here was all thanks to the top-notch nosh that was served up by Virgin on a day flight across the Atlantic from Boston (BOS) to London (LHR).

Things started off great with TPG Points & Miles Editor Nick Ewen begin given a menu. While the options available didn't quite match what was printed on the menu, we still love to see a menu being handed out in economy in the first place.

The breakfast served was not really what Nick was expecting having read the menu, but despite it being more of a light snack than a full meal, he said: "It was nice to put something in our stomachs so early in the flight." I had a similarly disappointing breakfast offering on a Virgin Atlantic day flight from New York to Heathrow last year.

Outstanding is not a word often used to describe economy meals. However, Nick's second meal was exactly that. His Italian sausage marinara was flavorful and well-balanced.

That said, the peculiar timing and reversal of the order of the main meal and lighter snack meal on this flight did mean that Nick and his family went hungry at various points on the flight as well as just after landing.

Score: 12/15 (in line with the updated scoring system)

In fifth place, we have Delta Air Line's economy meals on a flight from Los Angeles (LAX) to Amsterdam (AMS). On this flight, economy passengers were even given a menu. While this might not sound ground-breaking, this is a welcome and rather rare and unexpected bonus when flying in economy.

TPG reporter Katherine Fan was impressed with the three options available and even more impressed with the flavor of her lemon caper chicken that she "never anticipated experiencing in economy." Big words, right? Even the salad served was "impressively fresh."

Despite the chicken being a little on the dry side and the texture of the bread roll being reminiscent of a dish sponge, it was a huge thumbs up from Katherine, who liked her main course so much that she nearly asked for a second serving.

Delta got extra points for the snacks, which were available in the galley between meal services and were "surprisingly good."

Breakfast the following morning before arrival into Amsterdam didn't quite get the same fanfare. The yogurt (which is hard to get wrong) was "very good" while the muffin was a little on the sugary side.

Hungry now? I am after writing that.

These meals are examples of economy class food done right. Anything less, quite frankly, just isn't good enough. The airlines that provided these meals have proved that eating in economy can be a pleasant culinary experience and that a little care and attention to inflight menus and catering goes a long way.

Our points-obsessed staff uses a plethora of credit cards on a daily basis. If anyone on our team wouldn’t recommend it to a friend or a family member, we wouldn’t recommend it on The Points Guy either. Our opinions are our own, and have not been reviewed, approved, or endorsed by our advertising partners.
See all best card offers
Related stories
Guide
The best credit cards for pet expenses
News
Final call: Pick your 2022 Delta Choice Benefits by Jan. 31
Guide
26 cruise secrets from a cruising expert that will blow your mind
Guide
Store vs. cash-back credit cards: Which one should I get?