When Photography Gets You in Trouble at 35,000 Feet 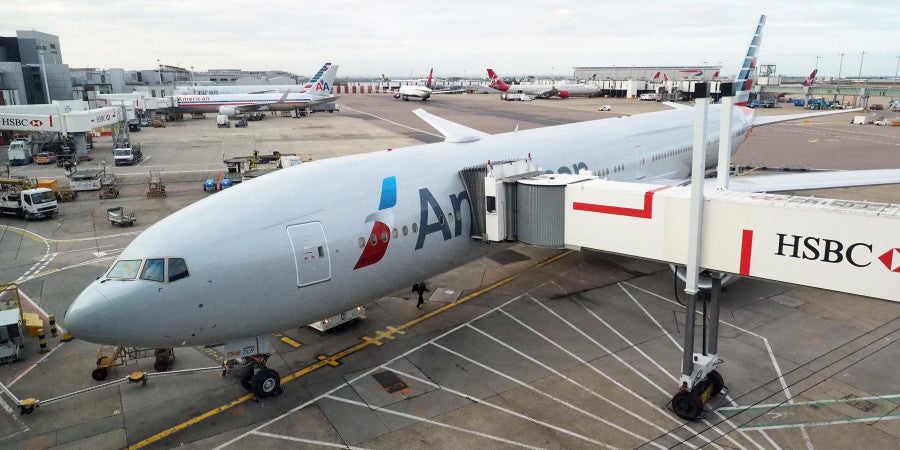 When Photography Gets You in Trouble at 35,000 Feet
This post contains references to products from one or more of our advertisers. We may receive compensation when you click on links to those products. Terms apply to the offers listed on this page. For an explanation of our Advertising Policy, visit this page.

Some airline policies don’t make much sense, but if a flight attendant makes a request, you should always follow along. In TPG Editor-in-Chief Zach Honig’s case, that meant walking away with fewer review photos than he may have liked, and a not-so-great impression of AA.

“The captain’s contacting dispatch to ask about you.” That isn’t exactly something you’d want to hear in the middle of a flight — and, thankfully, it was a first for me.

Let’s back up a bit…

Yesterday, I traveled to London on my first long-haul American Airlines flight in five years (while TPG swears by American, my last AA flight was in 2010 from Chicago to Shanghai in Flagship First). When I arrived at the airport I had a boarding pass for Paris, but after a last-minute aircraft swap to AA’s older angle-flat 767 business class, I requested a move to a connecting route through London so I could try out American’s new 777-300ER business class — which, overall, I really love.

Besides an hour-long delay and a very mediocre “express meal” dinner (served an hour into the flight), the trip was off to a good start. The gate agent even arranged for me to board five minutes early to get some pictures of the empty business-class cabin, which was very kind, especially considering that we were already an hour behind schedule. I was ready to write off United and very strongly consider moving my business to AA, until, well, this:

About two hours into the flight, I looked over and saw my girlfriend Sarah interacting with the purser. At first I thought she was asking for a drink, and when the conversation continued for a few more seconds, I assumed they were having a friendly chat about the flight. Until I noticed Sarah gesturing toward me. I removed my Bose noise-canceling headphones (courtesy of AA) and my jaw dropped when I heard what the discussion was actually about.

She told the purser that she should come talk to me instead, and while the purser was walking through the forward galley to make her way to me, Sarah caught me up on the situation. The purser was accusing her of taking pictures on the plane, which, apparently is forbidden. Except that it’s not — well, not exactly. The thing is, Sarah didn’t even have a camera — I was the one taking pictures. The purser went so far as to say “this could be trouble for the both of you,” which carried some pretty serious implications, especially given the current state of commercial air travel.

Once the purser got to my seat, I politely explained that I was taking pictures for a review of AA’s new business-class seat, and answered all of her questions. “Do you have a letter of authorization?” No, but the gate agent let me board early to take pictures and I spoke to the PR team earlier in the day (although that was before I moved from AA44 to AA100). “What did you take pictures of?” The cabin (with permission), the seat, meal, in-flight entertainment, my girlfriend sitting next to me, etc. Basic stuff that I’ve seen in countless reviews (several of which I’ve produced).

Since the purser implied that photography was formally prohibited, I asked if there was a written policy that I could review. She said that it isn’t available to the public, but that it’s in her employee handbook, and showing me that could compromise the security of the airline. Well that stinks.

She didn’t let down. I didn’t really know what else to say (and I explained as much), and at that point she said “Would you like to speak to the captain?” Not realizing it was another threat (I should be afraid of the captain?), I said yes, since I figured I could help clear things up (from the purser’s tone, it seemed like a diversion to Goose Bay to boot me off the plane wasn’t out of the question, so I figured I better explain myself). My guess is that she thought I was sarcastically saying I’d like to speak to the captain, so she then suggested that I could speak to the police when we landed in London, too. Holy moly.

Hoping to avoid leaving the plane in handcuffs for taking pictures for my job, I gave her the name of the PR representative I had spoken to earlier in the day, and she left for a while. When she returned 20 minutes or so later, I got a pseudo-apology. Something along the lines of “you can’t trust anyone these days.” After that, she was much friendlier with both of us, as was the rest of the crew (I even got a tour of the plane, an invitation to visit the snack bar — sorry, no pictures allowed — and service with a smile from several flight attendants!).

Of course, in the purser’s opinion, I was still the only one at fault here, for not arranging this “letter of authorization,” which apparently would have required me reaching out to the public relations team days or even weeks in advance of the flight. I explained that doing so ultimately would have compromised my review (we pay or redeem miles for tickets and don’t accept comped flights), as I wouldn’t put it past AA (or any other airline, for that matter) to brief the crew before the flight and suggest slightly more polished service for the benefit of the journalist and his or her readers.

Of course, if you want to avoid ending up in a similar situation (trust me, you do), you’ll probably want to ask permission before taking dozens of pictures. It’s not uncommon for me to take 100 pictures or more during a flight when I’m writing a review, and that’s probably what gave me away here, even though (with the exception of boarding, with permission) they were all captured from my seat. Brian spoke with AA public relations and we are going to work on avoiding this issue in the future, so stay tuned for how we plan to do this while maintaining editorial independence.

Here’s American’s policy on the matter, available at the back of the American Way in-flight magazine:

“The use of still and video cameras, film or digital, is permitted only for recording of personal events. Two-way pagers, radios, TV sets, remote controls and commercial TV cameras may not be used at any time during a flight. Please refrain from using any voice or audio recording or transmission while on an American aircraft. Unauthorized photography or video recording of airline personnel, other customers, aircraft equipment or procedures is prohibited.”

“American allows photography and video recording for personal use. For many customers, taking photos and sharing them on social networks has become part of their travel experience. When photographs and video are used for professional purposes, we do our best to notify flight crews so they are aware and prepared to offer some additional latitude with journalists and bloggers.”

The issue stems from personal vs. professional use, and as these photos were to be published on TPG, we fall in that latter camp. Ultimately, we need to evolve our policies as well — we don't want to put any of our employees in jeopardy, so we'll work with the airlines to get approval so a situation like this doesn't happen again. And if you're a blogger — no matter how small or large — you may want to consider requesting permission before photographing on planes. Unfortunately, this isn't the first time a blogger has gotten in hot water (read this story about fellow blogger Matthew Klint about getting thrown off a United Airlines flight), and it probably won't be the last.

We reached out to some flight attendant friends, including TPG's own Carrie A. Trey, and will be following up with a comprehensive list of airline policies. For now, I'm happy I'm not in an airport prison and I'm off to enjoy the Paris Air Show. Follow along on Twitter @ZachHonig and I'll be posting some cool #avgeek photos on the TPG Instagram @thepointsguy.

Featured image by You can get an amazing return by using Etihad miles to book AA flights.

Our points-obsessed staff uses a plethora of credit cards on a daily basis. If anyone on our team wouldn’t recommend it to a friend or a family member, we wouldn’t recommend it on The Points Guy either. Our opinions are our own, and have not been reviewed, approved, or endorsed by our advertising partners.
See all best card offers
Related stories
Guide
What is a good APR for a credit card?
Reviews
Rediscovering my Dominican roots in Washington Heights: A review of the new Radio Hotel in NYC
Guide
These airline and hotel programs offer free points when you sign up
Guide
8 tips for booking the best cruise shore excursion for your money