10 Unbelievable Attractions You Must Do Aboard Quantum of the Seas 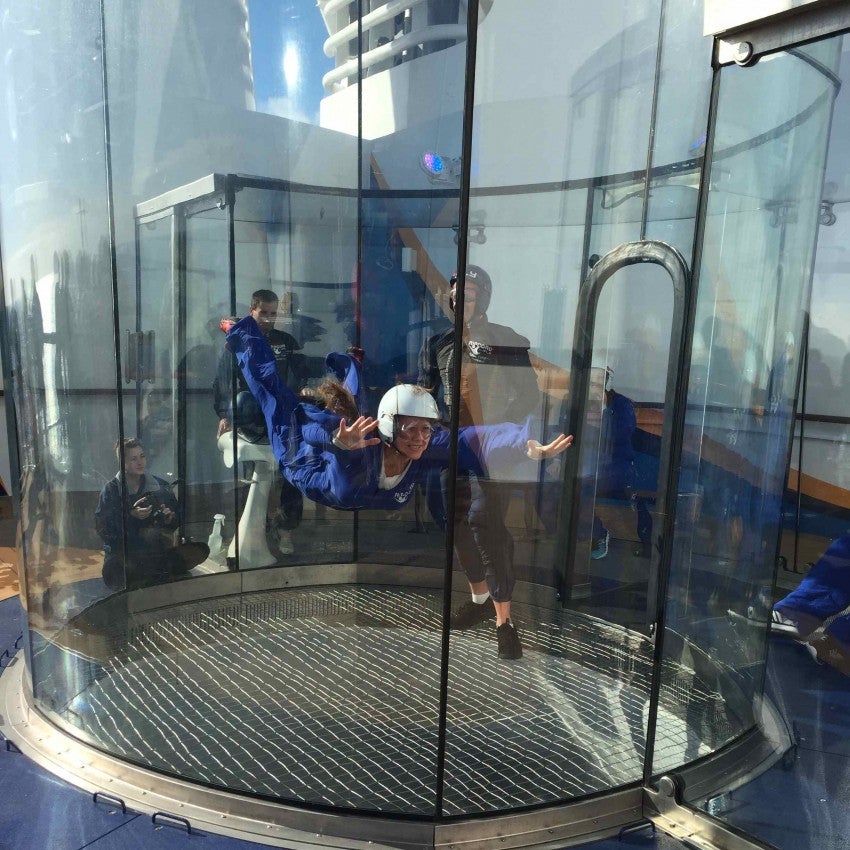 10 Unbelievable Attractions You Must Do Aboard Quantum of the Seas
This post contains references to products from one or more of our advertisers. We may receive compensation when you click on links to those products. Terms apply to the offers listed on this page. For an explanation of our Advertising Policy, visit this page.

TPG Contributor and Caribbean Expert Sarah Greaves-Gabbadon of Jet Set Sarah was aboard the brand new Quantum of the Seas cruise ship for its inaugural eight-night voyage across the Atlantic from England to Cape Liberty, New Jersey. The ship--the world's third largest--set sail on its first itinerary at the end of November. Here's Sarah's account of what you absolutely must do aboard this next generation cruise ship.

Royal Caribbean’s newest vessel Quantum of the Seas set sail on its first Caribbean cruise on Sunday, Nov. 23 as the third largest cruise ship in the world. Stacking up just behind two other Royal Caribbean ships, Allure of the Seas and Oasis of the Seas, Quantum is 1,141' long with over 2,000 staterooms, and capacity for nearly 5,000 passengers. To put that in perspective: Quantum is longer than five Boeing 747s, the width of almost three regulation-sized basketball courts, 2.5 times taller than the great pyramid of Giza and has more rooms than New York’s Waldorf Astoria.

Sailing from Cape Liberty, New Jersey on seven- to twelve-night Bahamas and eastern and western Caribbean itineraries, Quantum debuts with bells and whistles never before seen at sea. Throw in 18 restaurants, nightly Broadway-quality shows and trapeze lessons, and it’s easy to be overwhelmed by all your choices.

I spent eight nights on the ship as it crossed the Atlantic from Southampton, England to New Jersey, trying out as many amenities as possible along the way. To help you pick the best of Quantum’s shipboard smorgasbord, I’m sharing my top must-do’s for cruisers on this game-changing liner.

The robotic bartenders at Quantum’s Bionic Bar have been getting a lot of attention, and rightly so. After all, this is the first ship where you can use an app to order a custom cocktail from two robotic-arm “bartenders” who’ll shake, muddle, and stir up your desired libation from an inventory of 30 spirits and 21 mixers. The barkeeps, named B1-O and N1-C, can make two drinks a minute or up to 1,000 a day. Let them serve your poison via four conveyor belts, or have your drink delivered tableside by a real live human. Either way, the spirit is in the spectacle. Wanna see the robots in action? Here’s a timelapse.

A skydiving simulator on a cruise ship? Who’d have thunk it? But once you try RipCord by iFLY, the idea seems to make perfect sense. Assisted by an instructor, every passenger gets a two-minute “flight” free of charge in a wind tunnel mounted on the back deck of the ship. There’s no experience required--just watch a short instructional video beforehand, change into a jumpsuit, helmet and goggles, and go. And unlike real skydiving, there’s no need to fear plummeting to earth from 10,000'. I could go on and on about how this is the most exhilarating experience I’ve ever had at sea, but you should probably just watch this video instead.

I’ve never been particularly impressed with the “shopportunities” on cruise ships. Unless you’re into logo merch or want to stock up on duty-free cigs and Stoli, there’s really not much to tempt black-belt, luxury-loving shoppers like me. Happily, they’ve raised the retail game on Quantum with the first Cartier boutique at sea (where I’ve got my eye on a $40,000 rose gold-and-diamond Ballon Bleu watch!) and a Bvlgari store, both well stocked with covetable baubles at tax-free prices. You’ll also find the first on-board Kiehl’s skincare store, and better brands such as Michael Kors, Desigual and Uno De 50, so get ready to flex that credit card.

There are almost 3,000 pieces of art on Quantum of the Seas. Curated around the question, “What makes life worth living?” the collection explores universal themes of love, peace, joy and hope through paintings, sculpture, photography, video and electronic art. A must-see (and must-swing) is the installation by Wolfgang Winter/Berthold Hoerbelt in the Two70 living room on Deck 5. Combining modern art and old-fashioned fun this giant swing has an acrylic seat that lights up and changes color. There’s only one on the ship and at any given time, there’s a clutch of adults diligently circling the lounge waiting for their turn in the hot seat. Jump on and you’ll understand why.

5. Get a Different Perspective

Wanna be suspended 300' high above the Caribbean, nothing between you and the big blue but a few panes of glass? Make that fantasy a reality in the North Star, the orb-like observation capsule that transports passengers from Deck 15 skyward to another world high above the ship. From the lofty vantage point of the mechanical arm that gently lifts you above and over the side of Quantum, I was so enchanted by the sight of islands afloat in a vast sea (we made an unexpected stop in the Azores) that I hardly remembered my fear of heights. Mesmerized by the sight of people as small as ants scurrying along the ship’s outdoor jogging track, and transfixed by the frothy ribbon of the ship’s wake, all I could do was marvel at how small we are in this big, beautiful world. While I can’t guarantee you’ll experience any such existential moments of clarity, I can promise that you’ll have a great time.

Back in the pre-Quantum era, saving money by booking an inside cabin meant resigning yourself to a cramped stateroom in the bowels of the ship and never knowing whether it was day or night because there was no exterior window. Not anymore. Quantum’s “virtual balcony” staterooms feature a smart solution to the no-porthole problem with a giant wall-mounted video screen onto which live images (taken from four high-definition cameras on the bridge) are continuously broadcast. I bunked in a VB cabin during our transatlantic voyage and I can confirm that it made a huge difference to my onboard quality of life (and possibly minimized my jet lag) to have “natural” light streaming (literally) into my quarters. Genius.

On the typical cruise you can expect to eat your weight in high-calorie, high-fat indulgences from early-bird breakfast through to the midnight buffet. And if that’s what you’re into, you won’t be disappointed with 18 tempting dining options including restaurants from Brit chef Jamie Oliver and a pub by Miami’s Michael Schwartz. But if, like me, you’d rather not disembark five pounds heavier, you’ll want to be a regular at Devinly Decadence. Helmed by “The Biggest Loser” chef Devin Alexander, this elegant restaurant in the ship’s solarium features high-flavor fare that doesn’t taste like it's low-calorie. The hearty buffet brekkie is laden with Alexander’s homemade sausages, low-fat parfaits, fresh fruit pancakes and filling egg dishes. And at dinner time, the dessert menu, with its chocolate brownies and carrot cake is as indulgent as it sounds. Good food without the guilt? Sign me up.

Royal Caribbean is the only line to boast FlowRiders on board, and Quantum also has the signature surfing simulator at the rear of the ship on Deck 15. Whether “hanging ten” comes easy or you end up wiping out repeatedly, it’s the most fun you’ll have at sea balanced on your two feet – or face down in the 30-miles-per-hour “surf.”

Bumper cars at sea? You bet. Take them for a spin at SeaPlex, a two-tiered indoor activity space where passengers can bump, push and shove their way to victory in a fleet of about a dozen cars in the climate-controlled comfort. The same rink pulls quadruple duty for rollerskating (don’t miss the 1980s-themed sessions), as a basketball court and as a trapeze school, where cruisers braver than I can learn how to fling themselves off a tiny platform into the air (there’s a safety net, of course). And upstairs, gamers can show off their skills in a series of “pods” kitted out with XBox consoles, foosball and ping-pong tables. Whether you prefer your action tame or terrifying, at least one outing to SeaPlex is essential.

Royal Caribbean brags about having Broadway-quality shows and it delivers on Quantum with a full-scale 90-minute production of the ABBA musical Mama Mia! in the Royal Theater that’s every bit as entertaining as anything I’ve seen on the Great White Way. And in the Two70 lounge, 100- x 20-foot-tall, floor-to-ceiling windows become a giant digital high-def backdrop that can transform into any scene for high-tech shows such as Starwater (pictured), a fantasy of singing, dance and aerial acrobatics. There’s live music every night in Music Hall, and all onboard productions are complimentary (just reserve seats in advance). So if you love the nightlife (and you got to boogie), Quantum’s your ship.

TPG Tip: While the Chase Sapphire Preferred is a good all around card for travel, frequent cruisers may also want to check out the Crown and Anchor loyalty program with Royal Caribbean.

12 Unexpected Things I Learned on my Alaska Cruise - On Shore

What do you think of the new Quantum of the Seas? Are you tempted to hop aboard?