Using Miles To Get To Tahiti 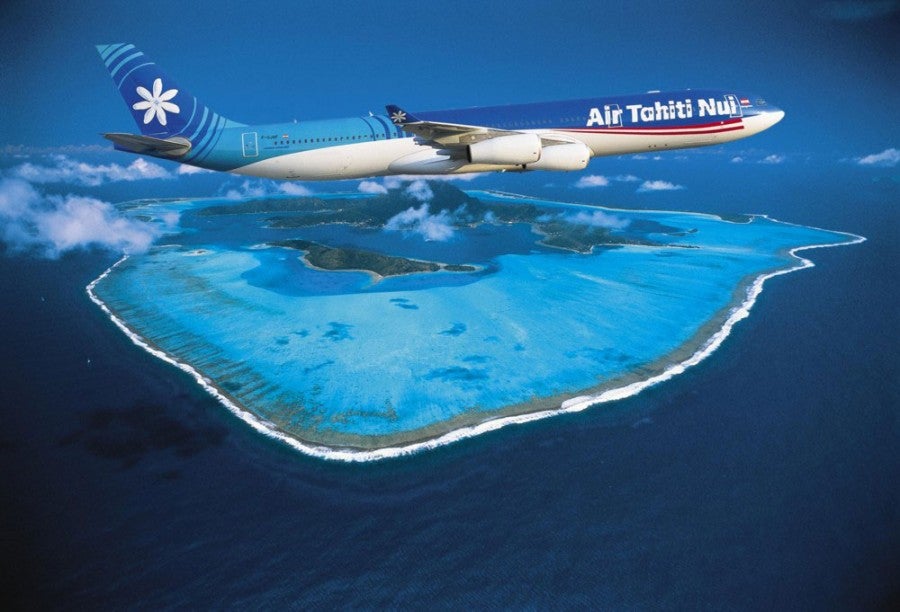 Using Miles To Get To Tahiti
This post contains references to products from one or more of our advertisers. We may receive compensation when you click on links to those products. Terms apply to the offers listed on this page. For an explanation of our Advertising Policy, visit this page.

The latest IHG PointBreaks list went live last week, meaning there's a whole new batch of hotels where you can score discount award nights for just 5,000 points. Probably the most exciting property on the list this time around, which is available for bookings through January 31, 2014, is the InterContinental Resort Tahiti, and based on the reader comments on my post, I know a lot of you are excited about it and have booked awards there already, but are now wondering how to get down to the South Pacific. That's why I thought I'd put together some ideas for how you can use miles to fly to one of the world's top tropical destinations.

I'll be honest and say that there aren't dozens of options, but there are a few decent ones that can get you without burning through a stack of miles. Both Air Tahiti Nui and Air France fly there from Los Angeles, and you can also route through Honolulu on Hawaiian. Meanwhile, just in case you're coming from points further afield, it's worth noting that Air New Zealand flies here from Auckland, Emirates and JetConnect from Sydney, and LAN from Santiago and Easter Island.

This is one of those funny off-label flights that people tend to forget about, but Air France operates a non-stop flight from LAX to Papeete several times a week.

Flying Blue: Using Flying Blue miles you would need the following amount of miles for a roundtrip awards:

And there's actually pretty good availability even throughout the winter. I did a quick search in November and found flights in each direction on a couple days each week at all levels. Here's a sample itinerary:

As you can see, both the outbound and return are available in all three classes. The one major drawback is that awards in Economy and Premium Economy incur carrier-imposed surcharges of nearly $400 roundtrip, and those in Business will cost you $600, so that's something to take into consideration.

However, it might still be worth going this route since tickets can be very expensive and even paying surcharges might be a fraction of the airfare. For instance, an economy ticket on the same dates would be over $2,000.

Flying Blue might not be one of your primary programs, but it is a transfer partner of both Starwood Preferred Guest as well as Amex Membership Rewards, so you can always transfer points in to top up your account for an award.

Delta: Delta doesn't actually fly here, but remember that Air France is also a SkyTeam partner of Delta, so you can also use your SkyMiles to book an Air France award at the following levels.

Though you won't find as much award availability booking through Delta as you will directly through Flying Blue, there is still some and I was able to find awards on the same dates as above.

And business class awards are 150,000 miles + $56 as well, but Delta.com was not displaying them. I was able to call Delta and verify that there was availability, though, as well as the fees, so you might have to call in if Delta.com is not pulling in award availability. As I said, though, Flying Blue does release more award seats to its own members, so you might not be able to book award seats using Delta miles, especially in premium classes, even if you are finding them with Flying Blue.

It's a shame, too. Because I might actually book an economy ticket using Flying Blue miles even though the taxes and fees are higher since you're saving 40,000 miles for about $350, or about 0.875 cents per mile. However, in business class, you are using the same amount of miles and getting much lower fees than booking through Flying Blue.

Plus, Delta is also a transfer partner of both Amex and Starwood, so you can use either type of point to top up your account for a redemption.

Alaska: Like Delta, Alaska is a partner (a non-alliance one) of Air France, so you can also use these miles to fly AF to Tahiti for the following amounts roundtrip:

Alaska.com won't display award space on Air Tahiti Nui, so you will have to call in to book directly with the airline. Taxes and fees are comparable to Delta - but as you can see, you need 20,000 fewer miles for economy and 30,000 fewer for business, so this is a good option to have even though Alaska miles can be harder to rack up and the program is only transfer partners with Starwood.

You can use ExpertFlyer to find Air France award space and then call Alaska to book open seats.

Korean Air: Like Delta, Korean Air is a member of SkyTeam, so you can use miles for awards on Air France, though the airline does tend to charge fuel surcharges on Air France that are comparable to Air France's at $400-$800. However, the redemption levels are pretty low, and it is also a transfer partner of Chase Ultimate Rewards if you have the Sapphire Preferred, Ink Bold or Ink Plus, so it's worth keeping in mind. You can redeem at the following levels:

Because as you'll note in the chart below, awards from North America to the South Pacific are actually much more expensive, but there's an exception for Air France's USA-Tahiti flight.

So while surcharges might be high, mileage levels are very reasonable and might be something to consider.

Though Air Tahiti Nui isn't in an alliance, it is partners with American, so using AAdvantage miles is probably your best bet.

Air Tahiti Nui award availability does not display on AA.com, but you can find it using ExpertFlyer to search for economy and business space.

Then you would need to call into American and ask them to book the award for you. Availability tends to be pretty tight, though as you can see, I found 3 economy and business class seats on the outbound next Thursday, for example:

With plenty of economy seats returning that Sunday and one business award on the following Tuesday.

So that's a handy tool. I called into American to check pricing on taxes and fees on both the economy and business class awards and was told that they would be $94.50 in either class.

Delta: What's interesting is that Delta is also partners with Air Tahiti Nui, so if you have SkyMiles, you have two great options to use your miles to fly to Tahiti. Here are the redemption levels again:

So you can search for both Air France and Air Tahiti Nui availability on ExpertFlyer and book the flights that work best for you.

The final major airline that you'll probably consider is Hawaiian Airlines, which flies to Papeete from Honolulu, meaning you can connect there from all over the US on routes that Hawaiian flies. Here are the redemption levels roundtrip:

Those are pretty big numbers so I wouldn't recommend this as a top choice, but there is a decent amount of award space and taxes and fees are just $5 each way.

Also keep in mind that Hawaiian partners with both Korean Air (and there will be smaller fuel surcharges than on Air France) and American Airlines, so you can use miles from either of them to fly this route as well if there is award space.

Virgin America: Virgin America and Hawaiian launched a partnership last November, and this could be another decent redemption option. Here are the points requirements for using Elevate points from LA to Papeete, for example:

So it's 45,000 miles for economy and 100,000 miles for first class - pretty decent, though it'll take you a while to rack up those points thanks to Virgin's revenue-based point program. Still, 45,000 points and $59 in taxes is a pretty good deal for a roundtrip economy ticket, though. Plus Virgin America is a transfer partner of Amex Membership Rewards.

As I mentioned, there are some out-of-the-way itineraries that can get you to Tahiti, but they involve flying through Asia or either Australia or New Zealand, so I won't go into huge detail here since this is about getting to Tahiti, however, if Tahiti is just one stop on a bigger trip for you to either Asia or Oceania, you could always use United or US Airways miles on Star Alliance partners like Air New Zealand. You'd need the following miles:

So there are actually a lot of choices out there for those of you with SkyTeam or American miles as well as those of you who earn Amex Membership Rewards or Chase Ultimate Rewards. As with all mileage redemptions, though, look through your options and determine which combination of mileage and fees/surcharges is the right mix for you.
[card card-name='Gold Delta SkyMiles® Credit Card from American Express' card-id='22034414' type='javascript' bullet-id='1']

Featured image by Think about a jaunt to Tahiti - it's easier than you think!