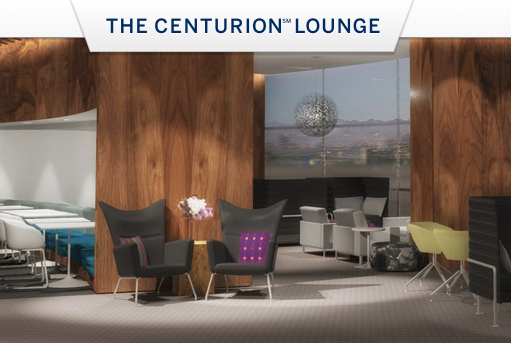 Preview Of The New American Express Centurion Lounge Opening At Dallas / Fort Worth DFW International Airport
This post contains references to products from one or more of our advertisers. We may receive compensation when you click on links to those products. Terms apply to the offers listed on this page. For an explanation of our Advertising Policy, visit this page.

Domestic airport club lounges rarely get me excited, however I was very interested when American Express opened a lounge at Las Vegas’s McCarran International Airport in February, and now they have followed up with the announcement that they would be opening a second Centurion Lounge at Dallas/Fort Worth International Airport on October 15, 2013 and TPG contributor Debbie Emery spoke with VP of Travel Innovations, Gary Portuesi, to get all the details.

"We are very excited to open our second lounge in such a central location," Portuesi told us in an interview on Wednesday. "This is a new type of lounge experience that we believe doesn’t currently exist in the US and cardmembers will take to it very well because of the uniqueness and because there is such a wide range of services."

What exactly do those services include?

One of the showcases of the new 9,000-square-foot location in Dallas is authentic Southwestern cuisine designed by local celebrity chef Dean Fearing, creator of Fearing’s Restaurant in Dallas, who was named by the James Beard Foundation as Best Chef: Southwest.

"We also have a national mixologist, Jim Meehan, owner of PDT, who has created a cocktail menu exclusively for us. Anthony Giglio is our national wine director and he curated a list of wines made from different wineries and grape varieties around the world," said Portuesi.

Along with high-end wines and spirits, you can grab breakfast, lunch and dinner, or use complimentary tablets and WiFi to check e-mails in between flights. Cardholders can also book travel and card-related services like reservations at restaurants, airlines and hotels to save time when you get to your destination.

The flagship of the Dallas Centurion Lounge is the Exhale Spa, where you can get a heated neck pillow or herbal tea while enjoying a 15-minute treatment such as flow, fusion or deep tissue massage, facials and manicures. While the experience in Dallas will be very similar to that of Las Vegas in terms of the quality, it will have a few different elements, most notably the Exhale spa.

Access to the Centurion Lounge in Dallas is complimentary to personal Platinum and The Business Platinum Card® from American Express as well as Mercedes-Benz Platinum cardholders, and to Centurion cardmembers, and any other American Express cardmember throughout the world can access it for a $50 fee. "Once you are in there, you can easily justify the $50 fee with a cocktail, dinner or a spa treatment," added Portuesi.

Like the Centurion Lounge at McCarran Internationl Airport, cardholders with complimentary access may bring a spouse or domestic partner and children under 18 or 2 traveling companions as complimentary guests

The Centurion Lounge in Dallas will be open from 5.30 am to 10 pm, while the Las Vegas lounge is currently open from 5 am to 12 am.

These two are the first in a series of Centurion lounges set to open in key cities and key airports around the country where cardmembers either live to travel to, but American Express is not revealing where the next locations are yet until they are 100% confirmed. "We are looking at gateway cities and coverage in similar cities where there is a concentration of cardmember flights and presence," promised Portuesi.

I speculate that American Express is launching the second Centurion Lounge at DFW specifically so that it has to pay American Airlines less for admitting Platinum cardholders to the Admirals Club - it just makes more sense to own and operate their own lounge at this major hub. So my guess is that we'll see future openings in other airline-specific hubs of Amex's three airline lounge partners - American, Delta and US Airways - such as Miami (American), Atlanta (Delta), Philadelphia (US Airways) and even possibly New York and LA, but only time will tell.

I fly American all the time but rarely transit through DFW, however hitting up the new lounge might just be worth the detour so stay tuned for a full review!